Joe B: 7 Observations from Bills - Colts 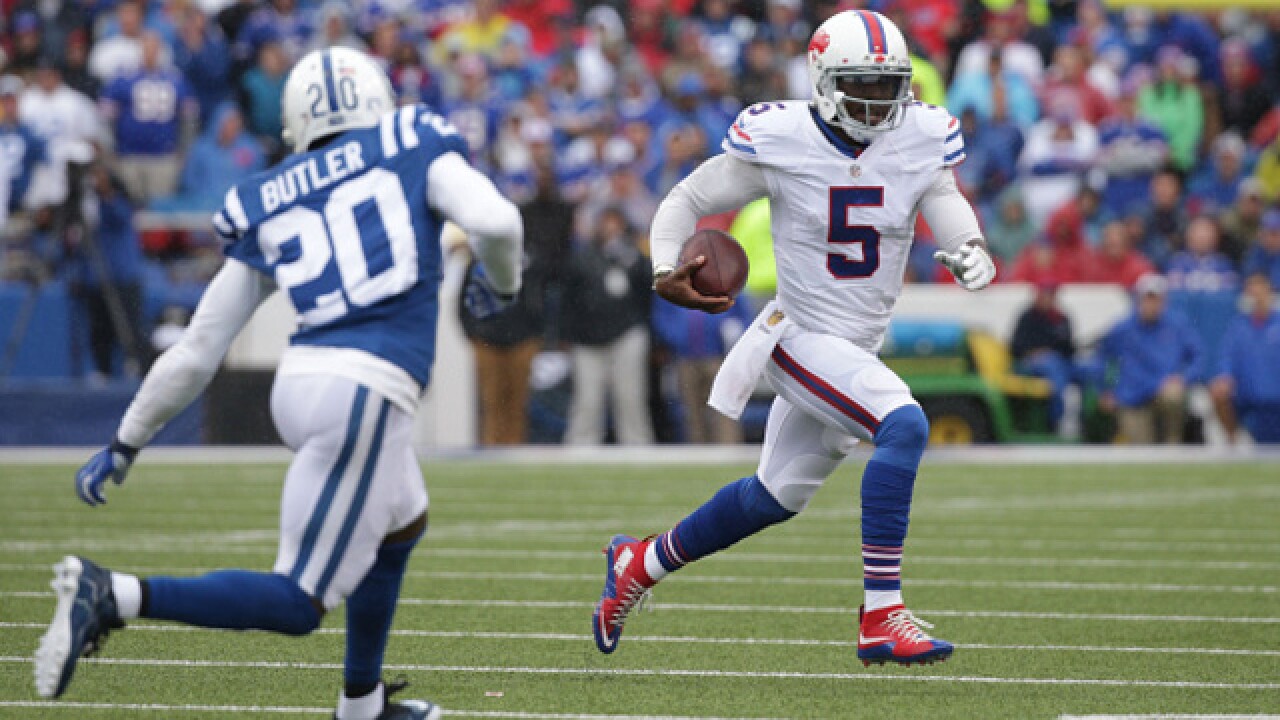 Brett Carlsen
<p>ORCHARD PARK, NY - SEPTEMBER 13: Tyrod Taylor #5 of the Buffalo Bills scrambles outside the pocket as Darius Butler #20 of the Indianapolis Colts defends during the first half at Ralph Wilson Stadium on September 13, 2015 in Orchard Park, New York. (Photo by Brett Carlsen/Getty Images)</p>

The day fans of the Buffalo Bills have been waiting for since Rex Ryan signed up to be the head coach of the team came and went, and it couldn’t have gone much better for those that support the men in red, white, and blue.

The Bills came into the first game of the 2015 regular season, and served up a statement victory over the AFC runners-up from 2014. To put it bluntly, the Bills punched the Indianapolis Colts in the mouth, and the game was never in doubt despite the 27-14 final on the scoreboard.

My observations from the Bills opening salvo:

1) The mystery man, Tyrod Taylor, comes up aces
- Many people have been tricked by the fool’s gold of the preseason. What always appears to be right has been wrong, and players that perform poorly have stepped it up in the regular season. One game into the Tyrod Taylor era with the Buffalo Bills, and the preseason performance we saw was no fluke. Taylor looked the part in all phases of the game. He looked poised when throwing the ball, he delivered accurate passes that gave his receivers room to roam, he stood tall against pressure, and he scrambled when appropriate. Basically, Taylor was an X-factor against a Colts defense that was expecting a big Bills rushing attack. To play devil’s advocate, the Colts are not a very talented group, and the Bills rightly took advantage of their weaknesses. But, that wasn’t the only reason the Bills had success on offense. They had success because Taylor proved to be every bit that they thought he could be when they named him the starter. We’ll see what he brings as teams start to game plan for him, and know more about him to try and take away what he likes to do. However, if he can sustain, there is no reason to think that the Bills won’t be a serious contender to not only make it to the playoffs, but perhaps even to win a game. It’s too premature to make that call, but flat out, the Bills and Taylor were impressive.

2) Luck, running offense unnerved by Rex’s scheme
- The Indianapolis Colts, simply put, had no answer for Rex Ryan’s defense. They tried attacking the rookie Ronald Darby — to which they had some success early on, but an underthrow on a pressured pass forced Andrew Luck to miss a wide open T.Y. Hilton, and the rookie made a great play to intercept the pass. From that point forward, the Bills took a step forward and never looked back. The defensive line dominated the Colts offensive line all game long, the linebackers were outstanding (more on that shortly), and the defensive backs — including Darby — all came to play. The Colts could never get comfortable, and because they’ve essentially put everything on the shoulders of Luck to lead them to victories this season, they couldn’t do anything to counteract the Bills pressure. Outside of defense on third downs (8-of-15 attempts converted successfully) and penalties, the defense was as good as advertised.

3) The Bash Backers
- The Bills made a calculated bet this offseason by sending young linebacker Kiko Alonso to the Philadelphia Eagles in exchange for LeSean McCoy. They did so because they were impressed by both Preston Brown and Nigel Bradham, and hoped that duo would continue on in their progress to becoming a very solid duo for the Bills. Through the first game of the Rex Ryan era, no arguments here. Brown made a couple of wow plays, both in run support and with a breakup in coverage, but the real star of the two was the play of Bradham. He can become a superstar in Ryan’s defense, and he had as solid a debut as you’ll find. He led the team with eight total tackles, had one for a loss, and hurried up Luck twice with two quarterback hits. The Bills will use Bradham as a blitzing weapon as the season goes on, and he has the skill-set to make a huge impact. Between Bradham and Brown, they had 14 total tackles. The defensive line is very good, but the inside linebackers are no slouches, either.

4) Gilmore shines
- There was some concern with Stephon Gilmore this summer after some up and down practices at training camp, but through one week, all that worrying was for naught. He had some passes completed on him, but, Gilmore was one of the studs of the day in a game where he was bound to be tested quite a bit. He finished the afternoon with four passes defended and six total tackles, and did everything he could to prevent the Colts from getting into a rhythm on offense. He’ll get plenty of opportunities throughout the season to show that he’s worth all the praise that he gets, being the number one cornerback in a Rex Ryan, man-to-man, island style of defense. He had a very good second half to 2014, and started off the 2015 regular season just as well. What’s interesting, is that the Bills didn’t have their cornerbacks shadow a receiver like most thought they would. Instead, Gilmore was the right cornerback, and Darby the left cornerback. As the rookie gets more comfortable, we’ll have to see if that trend continues.

5) Where’s Sammy?
- There weren’t too many glaring weaknesses for the Bills in their Week One victory, but here’s one: why wasn’t Sammy Watkins targeted more than three times in the entire game? To make matters worse, his lone significant target came with just 10:44 to go in the entire game, meaning he really wasn’t featured at all. Watkins is a premiere talent at wide receiver, so, what gives? There are a few potential explanations — perhaps he’s still a bit hampered by the injury from the summer, maybe Vontae Davis just completely took him out of the game, or, the Bills aren’t concerned about getting individual players touches as most teams do. Of the three, it’s probably the latter reason. With the way the Bills are setting their offense up, good luck on predicting which wide receiver will shine from one week to the next. This week, it was Percy Harvin. Next week, it could be Watkins, and the week after that, maybe it’s Charles Clay, or Robert Woods. As long as the offense is moving the ball, and the Bills are in control, they don’t care who is getting the ball. That may change when they start facing more adversity in being down in a game, and then they could start forcing the ball to their most explosive playmaker. But, in the perfect world — which is what we saw on Sunday — there was no need. To fantasy football players, that’s not a great thing. To coaches that just want to win, they’ll take it every single day.

6) Not much progress for the O-Line
- Besides the quarterback competition, the single biggest question heading into 2015 all revolved around the offensive line. Their offensive line, quite plainly, was not up to par when trying to block for their runners. They were getting beat at the line of scrimmage, and even when a big play happened, it would be brought back by a penalty. Don’t get fooled by the total rushing statistics, either. The Bills might have gotten 147 yards on 36 attempts, but 41 of that was due to Tyrod Taylor scrambling from the pocket, and another 26 of it is from the Karlos Williams touchdown run in which he had to do the whole thing himself with the play practically dead. Removing those plays, the Bills averaged 3.1 yards per carry, getting a total of 80 rushing yards on 26 attempts. The offensive line, from left to right, needs to be a lot better than they were. On the bright side, the pass blocking improved from last year. However, this is a run-oriented team that couldn’t do that efficiently enough.

7) Karlos Williams makes strong debut
- The kid can certainly play, ladies and gentlemen. Karlos Williams, who grabbed ahold of the second running back job in training camp, and got it back upon his return from a brief hospitalization in the summer, was among the most impressive parts of the offensive attack on Sunday. Williams, a fifth-round pick out of Florida State, has a ton of raw ability and a punishing running style that will literally run through defenders. Williams displayed that, but also showed he’s advancing as a runner with his vision, too. The 26-yard touchdown was a thing of beauty, when the play looked dead due to a lack of a push up front from the offensive line. Williams spotted some room to roam, used his explosive legs and shot out of a cannon to get to the end zone for his first career touchdown. If he continues to progress, he is a perfect fit to Greg Roman’s offense, to where LeSean McCoy is a bit miscast. However, McCoy is still the superior player as Williams continues to grow. However, keep track of his progress. There is an intriguing future for him if he keeps working at it.

Bills MVP: Tyrod Taylor
- No one knew how he would play, and he was superb. A 51-yard touchdown toss that was perfect to Percy Harvin, a dynamite 31-yard scramble from a dead play in the pocket, and accurate throws all throughout the game. The Bills, for one week at least, have themselves a quarterback.

Bills LVP: Bacarri Rambo
- Rambo struggled upon replacing Corey Graham, who had to leave the game after being placed in the league’s concussion protocol. The first touchdown of the Colts was on him, not properly attacking a pick play that other members of the defense seemed to know was coming. Both Aaron Williams and Nigel Bradham were furious with Rambo after the play. However, there wasn’t much from the game to complain about from a Bills perspective.

Final Thoughts:
- This game, against an Indianapolis Colts team that made it all the way to the AFC Championship game in 2014, was an outright statement to the rest of the division, conference, and league. This is a much different team than the one we saw last year, specifically because of the play of their brand new quarterback. The defense was fantastic, Taylor got the job done enough for the team, and the special teams units were great as well. The Colts were a good opponent to play in the first week because they have some glaring deficiencies. If the Bills look the part once again in Week Two against New England, watch out. The hype machine will be at an all-time high, which hasn’t been the case in Buffalo in quite some time.