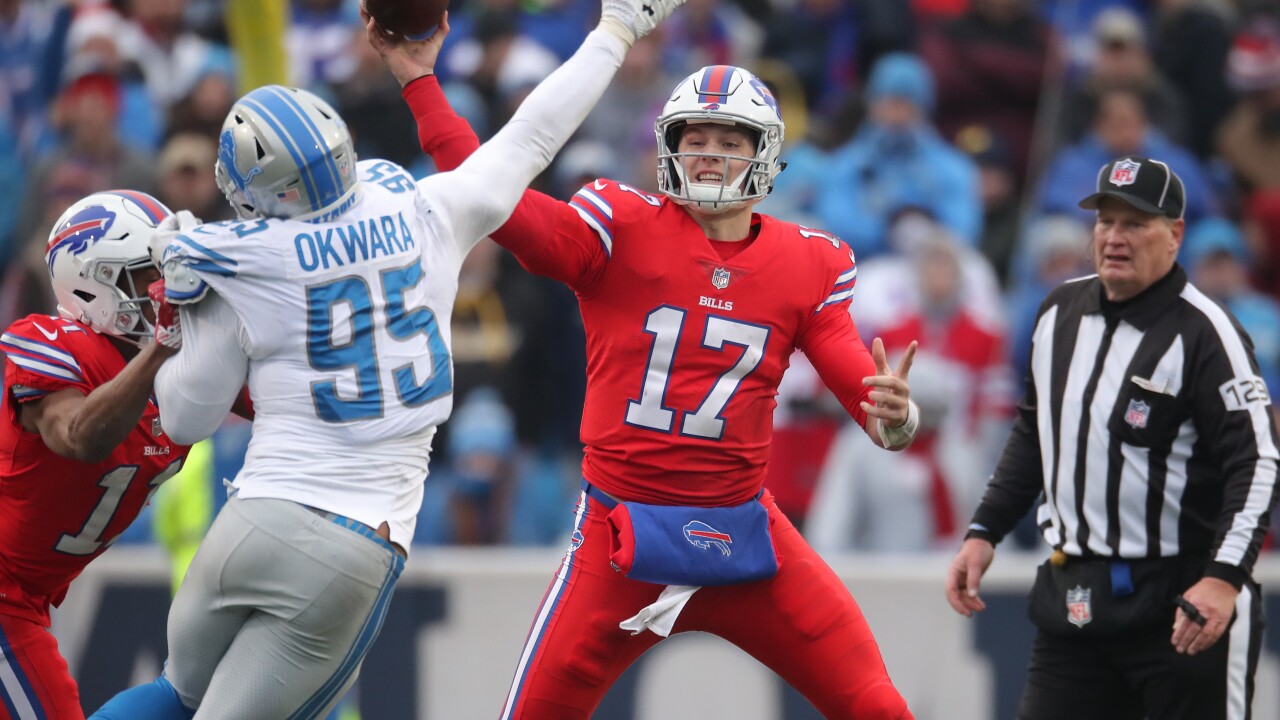 ORCHARD PARK, NY (WKBW) — Two days down and only one to go for the Buffalo Bills before the long break ahead of training camp. However, on the second day of mandatory minicamp, they would have hoped to see a bit more from their offense.

As the Bills went through Wednesday's practice, it became abundantly clear that the defense was getting the better of the day. It led to some frustration from offensive players along with some big plays by the defense.

Seven observations from the second day of minicamp:

1) Josh Allen seemed in his head during the practice
- A down day for Allen began right in the early stages of practice with an overthrow down the sideline in 7-on-7, and that carried into team drills as Allen missed a deep pass down the left side of the field to the speedy John Brown. The miss to Brown elicited Allen screaming out in frustration. From that point forward, incompletions were a bit of the norm on Wednesday for Allen. As the reps continued in that set, Allen threw an interception to safety Jordan Poyer, which further added to the mounting disappointment from the young quarterback. As he looked on during the start of Matt Barkley's reps, Allen looked on with his helmet halfway up, his hands on his hips, while wearing a 40-yard stare. As the team was about to get into another set of team drills immediately after Barkley's reps, Allen displayed some leadership by calling the entire offense together and taking accountability for his poor start to practice and urged everyone, himself included, to finish the day strong. Unfortunately for Allen, his struggles did not dissipate. He had an early pass tipped by the dropping back defensive tackle Jordan Phillps that almost landed in the arms of safety Micah Hyde. Then Allen shuffled to the left of the pocket and targeted wide receiver Andre Roberts about 20 yards down the field, except his aim was behind the in-turning Roberts, and both cornerback Levi Wallace and nickel corner Taron Johnson had a chance at an interception. It was after that play that Allen, who still appeared to be in his head, hit his helmet in frustration. The team drills ended with Allen staring down receiver Victor Bolden, Jr, which allowed cornerback EJ Gaines to get a jump on the play for a pass breakup, and then he overthrew tight end Dawson Knox on a back shoulder play along the right sideline. Allen got one last crack at team drills, to which he started to have more success as the offense began just outside of the red zone. He put together some completions and put the offense on the doorstep of the end zone. That wasn't without one more close call, though, as the placement of a back shoulder throw was too far inside of the right sideline, and Poyer almost picked off that pass. The next play, Allen saw a breakdown in protection in front of him and found open space to scamper into the end zone to end the day on a high note. All in all, the Bills will need much more consistency from their top quarterback, though it is fair to note that he was without three of his four receivers. It just seemed like Allen was off for the majority of the day.

2) Poyer continues dominant spring
- If you were able to stomach the entire Allen synopsis, you'd have noticed the mention of safety Jordan Poyer twice. It has been nothing new for Poyer, as the veteran safety seems to have hit a new level of effectiveness in these spring workouts. Poyer has been all around the ball for the majority of the spring and has brought in a handful of interceptions -- and keep in mind, there have only been five open practices to date. Either Poyer has impeccable timing for when he's making his great plays, or it's indicative that this is a defender that is performing on a different level this spring. The challenge for him will be to continue that through the summer and into the regular season, but after having two massively successful seasons as a starter for the Bills, it's hard to imagine it going belly-up in 2019. You should always take spring workouts with a pinch of salt because of the high degree of variance in performance once the physical element gets added in the summer. However, in Poyer's case, we've seen him do it before. If he continues these spring workouts into the padded practices of the summer -- and with all the added talent around him on defense -- a personal-best season isn't out of the question. There's a long way to go yet, but he has consistently been one of the best on the field for the last four weeks.

3) Levi Wallace continues with the 1s
- Over the final seven weeks of the 2018 season, the Bills were pleasantly surprised by Levi Wallace -- the former undrafted free agent out of Alabama. After watching how well he practiced all summer and into the fall, the Bills decided to find out about Wallace -- and he rewarded them with positive plays that majority of his snaps. Because you never quite know how a second-year player will respond to the success of the first year, the Bills brought in a pair of veterans to compete with Wallace -- partially as insurance. However, even with the presence of both Kevin Johnson and EJ Gaines, Wallace has remained with the first-team defense at right cornerback in all five of the open practices. Now, the Bills could have given Johnson or Gaines a day with the top unit in one of the seven days of OTAs that were not open, but seeing Wallace with the first-team defense on back-to-back days is a good indication that he's been there the majority of the time. Should Wallace go coast-to-coast with the ones on Thursday and through minicamp, that will be an insightful look at what's to come at the start of training camp, which would also mean Wallace is the favorite to retain his starting job from last season. As always with the spring, we'll see what happens when the pads go on at camp.

4) Spencer Long returns to the top unit
- After seeing an incredible number of spring injuries to just their offensive line, the Bills were able to run two complete groups during Wednesday's practice without having one of their players double up on reps. Undrafted rookie Garrett McGhin returned to practice, which allowed him to take over as the second-team center -- and more notably, allowed Spencer Long to resume his usual role with the first-team offense. Long was the second-team center on Tuesday and was moved up to the first-team as the left guard. Long has appeared at left guard with the top unit for three of the five open practices to date. That side seems to be their preference for the veteran free agent acquisition. The remainder of the first-team offensive line remained the same, showing Dion Dawkins at left tackle, Long at left guard, Mitch Morse at center, Wyatt Teller at right guard and rookie Cody Ford at right tackle. The Bills were still without six offensive linemen on Wednesday, however, with all of Quinton Spain, Jon Feliciano, Ty Nsekhe, Russell Bodine, Jeremiah Sirles and Ike Boettger still sidelined. Though Spain, Feliciano, Bodine and Boettger were all in red non-contact jerseys Wednesday -- which was an improvement from Tuesday.

5) Keep an eye on Victor Bolden, Jr. at training camp
- As it stands today, it seems like there are five safe bets to make the roster as a wide receiver -- and it's pretty clear from the outside looking in. John Brown, Cole Beasley, Zay Jones, Robert Foster, and Andre Roberts all seem to be a part of their plan. However, if a sixth wide receiver wants to make the team, they'll need to show up consistently. As the spring workouts have continued, one name that has continued to make plays and run crisp routes is Victor Bolden, Jr. The late addition to last year's active roster, Bolden, Jr. has taken advantage of all the available reps from the injured wide receivers and has drawn the praise of his wide receivers coach Chad Hall. Bolden, Jr. has been lining up exclusively as a boundary receiver, and with his special teams background in the event of an injury to Roberts, he could make a case to stick around past this summer. However, wide receivers have one of the toughest transitions on NFL rosters from unpadded spring practices to padded summer practices. Bolden, Jr. has put himself in positive standing with the coaching staff, and has set himself up for plenty of reps as training camp begins. From there, if he wants a spot as one of the final 53, he'll need to continue what he's done this spring.

6) Young defensive ends showing flashes
- As the Bills continue to look for the final piece of their defensive end rotation for the 2019 season, a couple of young players are making their case for summer reps as the spring workouts wind down. As of two weeks ago, the Bills replaced Eddie Yarbrough along the second-team defense with second-year player Mike Love at left defensive end. Love has done solid work as both a pass rusher and an edge setter in his opportunities with the second unit, which makes it likely that the trend will continue into training camp -- barring an addition to the roster sometime in the next month-plus. It's taken a while for seventh-round selection Darryl Johnson to get comfortable this spring, but he started to show some signs of life as a speed rusher against Conor McDermott on Wednesday. Johnson has length and speed but is still quite a raw prospect. With the roster spot for the fourth defensive end being as wide open as it is, I wouldn't rule out Johnson winning those honors through the summer -- though my lean right now is that he likely winds up on the practice squad to begin the year. Love and Johnson will both have a great chance to earn a roster spot this summer, though that could be one of those positions that the Bills look to add a recently released veteran to as the summer goes on.

7) A handful of players receiving minimal reps at minicamp
- On Tuesday, I noted that as team drills go, undrafted rookie Tyree Jackson wasn't getting much time in the spring practices. That continued into Wednesday with only a handful of reps, but Jackson isn't alone in that distinction. There are a few that weren't receiving much time, if any, in team drills as Wednesday's practice went along. That group includes running back Christian Wade, tight end Mik'Quane Deane, defensive tackle L.T. Walton, linebacker Juwan Foggie, and cornerback Denzel Rice. Running back Marcus Murphy, wide receiver Nick Easley, tight end Nate Becker, and defensive end Eddie Yarbrough received more than that first group, but not by much. The Bills seem focused on maximizing the reps with their top two units this spring. There could be more fluidity once the summer comes along, but the players listed are going to need to take advantage of every rep they do get to put themselves in better standing once camp rolls around.