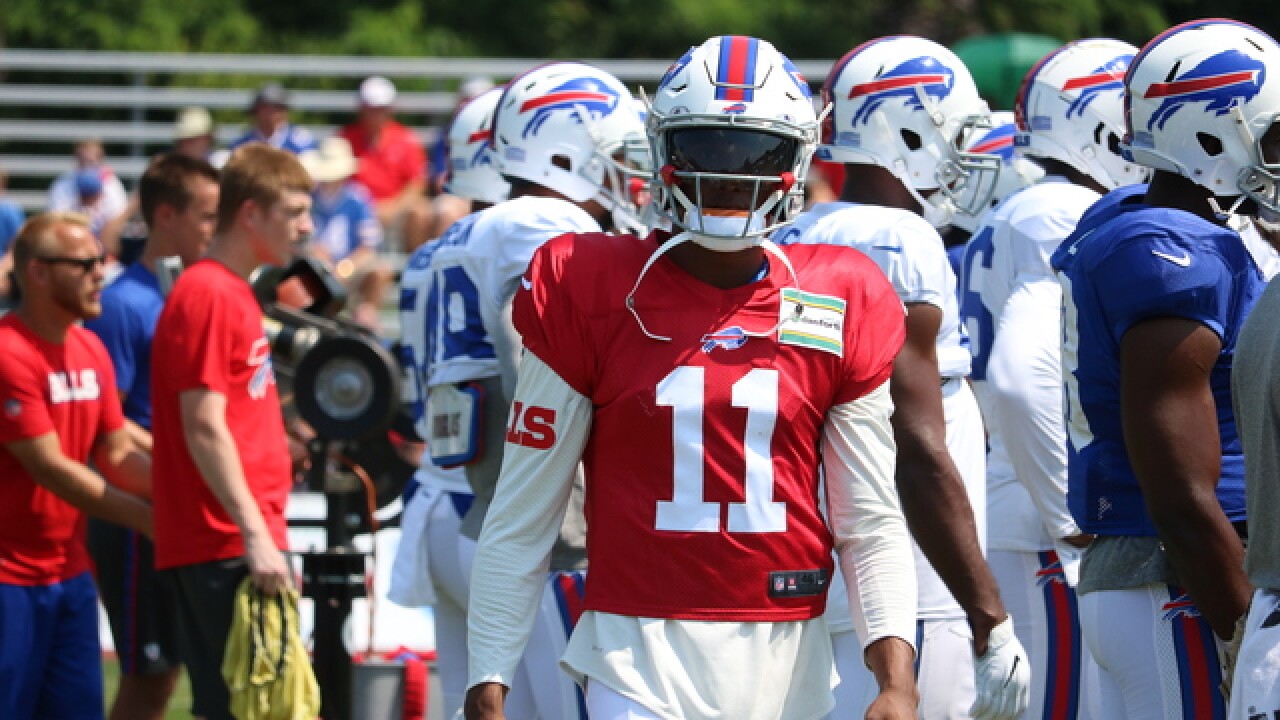 After a day to recuperate from their practice at New Era Field, the Buffalo Bills reconvened on the campus of St. John Fisher College on Sunday, for their ninth session of training camp. And with the completed practice, the Bills are now past the halfway point of camp -- and it's gone by in a hurry.

The Bills saw the return of a handful of players from injury, and it changed how the Bills divvied up the reps throughout the day.

What stood out on Sunday? Seven observations from Day 9 of training camp:

1) The passing game was less than inspiring
- We're now only two practices short of the Bills playing in their first preseason game, and it doesn't seem like the passing offense is progressing the way that you'd like to see at this point in training camp. To this point, there are still too many sacks behind the line of scrimmage, too many dump-offs and short passes, and plays that test the limits of the defense have not been nearly frequent enough. On Sunday, of the three quarterbacks, Nathan  Peterman probably had the best day of the three -- but that's because he completed a deep pass down the right sideline to Rod Streater. The rest of his day, although he completed 7-of-11 passes, included an interception that was all his fault and was passable in completion percentage only. A.J McCarron's sack streak continued, and mostly targeted receivers that were about eight yards and in. Josh Allen completed 3-of-8 passes, overthrew a few tries, and threw an interception -- even though that one wasn't his fault. The play of the quarterbacks have not been consistent from one day to the next, and Sunday was a perfect example of that.

2) Zay Jones returns (kind of)
- There was a bit of secrecy ahead of Sunday's practice. Sean McDermott was noticeably late for his press conference, and the team wasn't distributing the rosters that they usually have on the ready. It was a good indicator that a move of some sort was about to happen, and that move was the activation of wide receiver Zay Jones. The Bills didn't return Jones all the way just yet and instead put a red non-contact jersey on him to start his road back, but it's an important step nonetheless. Sunday was the first time that Jones practiced during the buildup to the 2018 season. He was out the entire spring, Jones hasn't practiced for the first eight days of camp, and now must work his way up the depth chart in the next month and ahead of the start of the regular season. Jones didn't do much, only going walkthroughs and some individual drills, and I'd expect that to continue into Monday. At this point, I think it's a bit of a stretch to think he'd be ready to play in the first preseason game on Thursday. However, he's fortunate that the receivers that have practiced haven't been good enough to worry that he couldn't win a starting job by the end of it all. To this point, the only guaranteed receivers to get time on offense are Kelvin Benjamin and Jeremy Kerley, which means there is a clear role for the third guy that Jones can win with work. But, as always, it's on him, and how he responds to adversity that he hasn't faced before. He'll be a fascinating player to track as camp continues.

3) The placement of Andre Holmes shows the state of the WRs
- Zay Jones has the opportunity to climb up the depth chart and grab a starting job by the end of it all because the muddled middle tier of that group have allowed it to exist. The middle-tier consists of Andre Holmes, Brandon Reilly, Rod Streater, and Malachi Dupre, and we know that no one has grabbed hold of that last starting spot remaining because of where Holmes practiced on Sunday. He's sat out the past two practices due to a quad injury but jumped right back into the first-team offense on Sunday -- his first day back. It's not even as though that Holmes has been extraordinary at training camp to this point, but he's someone they know will be on the roster for his special teams ability, and they can trust him enough to be out there. And for that reason, it's a sign that the other three in that middle-tier haven't entirely done enough to this point either. So, with that evidence, the job is ripe for the picking for someone like Zay Jones, or anyone else in the preseason games.

4) Proehl struggling in a big way
- The one player that it appears will not factor in the race for a starting job is rookie and seventh-round selection Austin Proehl. Going through the notes ahead of Sunday's practice, I had Proehl marked down for only being targeted twice during team drills. He completed the catch on one of those attempts, but then a defender stripped him of the football. On Sunday, he drew the ire of offensive coordinator Brian Daboll on one of the most memorable plays of the practice. Proehl was supposed to turn inside deep on a post route but just kept running straight. Josh Allen threw the ball where it was supposed to be, cornerback Breon Borders saw the ball coming and quickly stepped in front for the interception. Sometimes you don't know if the receiver ran the wrong route, but Daboll was irate and ran down the field and let it be known that he wasn't happy with Proehl not knowing the play. The rookie, after a solid spring, has not stood out and isn't even getting a ton of reps when all the receivers are healthy. If you had to ask me right now, I think he's probably on the outside looking in on a 53-man roster spot, but we still have to see how these guys do in games.

5) An unknown OL gets bumped up
- The Buffalo Bills, under head coach Sean McDermott, haven't been shy to give chances to players that weren't generally thought to be competitors for the 53-man roster. We saw it last year with Eddie Yarbrough and a handful of others, and in 2018, you can add undrafted free agent guard Ike Boettger to the list. Through the first eight days, Boettger had been with the third-team at right guard and has generally been an afterthought. However, the Bills must have liked what they've seen, because Boettger moved up the depth chart for one day at least. In one-on-one's, Boettger has done quite well in limited reps, but you can't judge his standing with the team entirely on that mid-practice drill. The player that was bumped down was reasonably surprising based on what we've seen (more on that in a minute), but now Boettger has the chance to try and steal a spot with some positive practices. A surprising move up, nonetheless.

6) McDermott drops down the depth chart
- The surprise player, after being so well thought of coming into training camp, was second-year player Conor McDermott. He dropped down to the third-team offense, taking time at both right and left tackle. McDermott has struggled in recent days at left tackle, and undrafted rookie defensive end Mat Boesen was giving him fits on Friday night at New Era Field, which probably was a reason for his undoing at Sunday's practice. I also saw Wyatt Teller working with the third-team at one point, but it was McDermott that paved the way for Boettger's improved standing on the depth chart. McDermott hasn't been able to counter edge rushers getting inside his pads and then pushing him back, and has had a few bad beats along the way. I still like his athleticism and think there's some talent there, which is why it was a mild surprise that he was the one bumped down. We'll see how he responds with the demotion as the week wears on.

7) Edmunds shows quickness in coverage
- Another day of practice, and another sign that Tremaine Edmunds is getting 'it' in the coverage aspect of being the middle linebacker. While he didn't pick off a pass like he had a pair of times last week, his quickness to recognize a swing pass to LeSean McCoy, and also the speed to get over to the running back, stopped a well-blocked play from gaining a ton of yardage. We still need to see how he performs against the run, but his athleticism in coverage is miles ahead of what the Bills had at middle linebacker in 2017 with Preston Brown. I've been quite impressed with what we've been able to see of Edmunds so far, and I'm eager to see how he performs on Thursday night.

Day 9 MVP: DE Mike Love
- The third-string undrafted rookie defensive end came down with two sacks against the first-team offense today in team drills. In limited chances, he's done pretty well, and it's helped get him on the field a bit more as camp has gone on. He's a solid practice squad option at this point.

Day 9 LVP: WR Austin Proehl
- Getting chewed out by the offensive coordinator and causing an interception of the rookie quarterback because of his mistake is a great way to earn LVP honors. He needs to turn it around, and quickly.