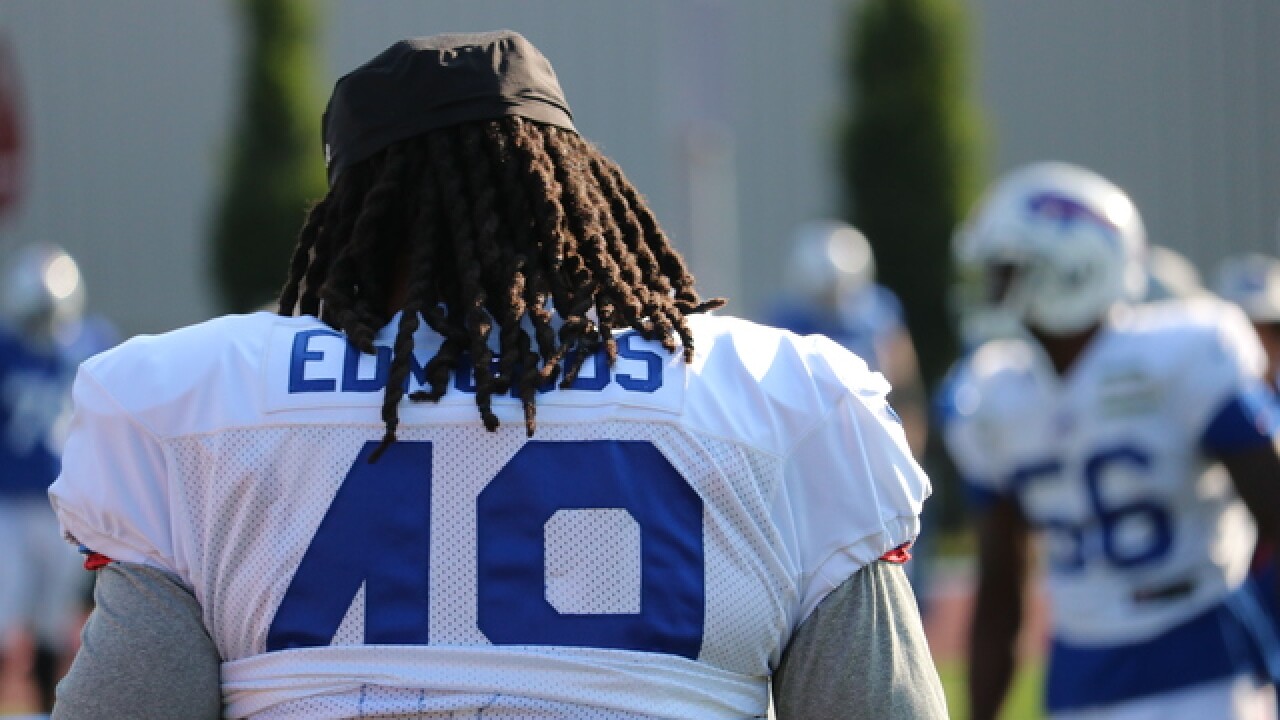 The Buffalo Bills have officially reached their first mini-break of training camp, where they'll head back to Buffalo for a Friday night practice at New Era Field, and then have a day off on Saturday. Before they journey back, first was their seventh practice of camp -- the lightest practice since the first two days of camp.

The Bills didn't work with the full gamut of pads on Thursday and also had a handful of players sit out the practice due to either rest or injury, but charged on nonetheless through Day Seven of camp.

Even so, some relatively big news hit right when the Bills went to team drills for the first time on Thursday. That, plus more, in my seven observations from Day Seven:

1) A significant day for McCarron?
- Through the spring and the first six days of training camp, the Bills haven't veered from a clear plan of attack at the quarterback position. A.J. McCarron and Nathan Peterman have split days with the first-team offense -- with Josh Allen filtering in here or there. There wasn't a single time that one of the quarterbacks received a substantial amount of first-team reps on two consecutive days. That is until Thursday came around. McCarron led the first-team offense out on the field for the second straight day, which makes a rather significant statement from head coach Sean McDermott about the state of the quarterback competition at the moment. That's not to say the quarterback competition is over -- because it isn't. However, the Bills also have to get ready for the start of the regular season in a little over one month, which means they can't go on splitting the first-team reps forever. McCarron has been steady and improving ever-so-slightly, and has had the most consistent camp of the trio -- despite all the sacks given up. It wasn't the prettiest of days for him on Thursday, completing 5-of-11 passes and getting picked off twice (one of which was not his fault at all), he also ended the practice on a high note with a touchdown to tight end Jason Croom. If McCarron is once again with the first-team offense on Friday night at New Era Field, he then becomes the odds-on favorite to be the starter for the first preseason game.

2) Drops and sacks, sacks and drops
- One day after the Bills went through extended work during team drills and ended up with a whopping 11 sacks allowed and six passes dropped by receivers, it wasn't exactly an encouraging thing for fans to read. However, that same trend continued along Thursday through all three offensive units. A.J. McCarron was sacked once in 12 dropbacks, Nathan Peterman was sacked once in eight dropbacks, and Josh Allen was sacked three times in 13 dropbacks. Adding it all up, that is right around the same sack percentage (15.2-percent) from Wednesday's practice (15.3-percent). That brings us to all the drops, which continued at an even worse pace than on Wednesday. During that practice, the Bills had six on 59 pass attempts -- a drop rate of 10.2-percent. That number spiked during team drills on Thursday, as another six passes bounced off the hands of receivers and to the ground -- only this time on 33 pass attempts. That bumps the drop rate up to an alarming 18.2-percent for Day Seven. It seems to be contagious for the Bills the last two days. No matter what, the Bills have to make some strides in both of these areas when the action goes live next week for the first preseason game.

3) Cam Phillips keeps making plays
- Despite one uncharacteristic drop in the middle of practice on Thursday, undrafted rookie wide receiver Cam Phillips continue his strong training camp with another huge day. Phillips set the tone early with the best reception of the day -- when Josh Allen unleashed a fastball from about 10 yards out to the back middle of the end zone intended for Phillips. The wideout had a defender draped all over him, showed strength on the ball and brought in the reception against all the odds. He doubled up on the success to end practice too. Allen fired it to the same spot and the same target, Phillips, and the rookie made another brilliant play on a perfectly thrown pass from a short distance. Whenever a wide receiver can complete the play the way that Phillips has been doing consistently through training camp, it usually begs a further look from the coaching staff to see if they can do it against some better competition. I would not be surprised if Phillips gets bumped up to work with the second-team offense before too long because he is significantly outplaying the rookie trio of Robert Foster, Ray-Ray McCloud, and Austin Proehl.

4) Did Ryan Groy get a leg up at center?
- While A.J. McCarron got all the fanfare of receiving first-team reps for the second straight practice, it just so happened that the other starting competition saw the same thing. For the first time since minicamp, one center took the first-team reps for the second consecutive day -- and that man was Ryan Groy. He and Russell Bodine have been splitting up the reps daily as camp has gone along, but Groy -- who has worked almost exclusively with McCarron -- took a step forward in his bid to win the starting job. Just like the quarterback position, this is not close to being over by any means. The preseason game and the performances of both players will weight heavily on the ultimate decision -- mainly because they'll be going up against players that they don't know the tendencies of by now. This competition has been relatively tight from my perspective on the sidelines during practices, but the Bills must have seen what they've liked from Groy just a tad more to give him this chance. Like McCarron, we'll see if it continues for a third straight practice.

5) Washington answers back with a strong day
- The first six days of training camp had not been kind to Adolphus Washington. The former third-round pick has struggled to make an impact, whether it be during team drills or in 1-on-1s against offensive lineman. However, he flipped the script with one of those days that keeps bringing you back to see what he can do next. Washington was explosive, he attacked the line intelligently, and was just a nuisance for his assignments on Thursday. He combined with Eddie Yarbrough for a sack of Nathan Peterman in the middle of practice during 11-on-11s, and then during 1-on-1s he had success in both of his reps as well. On his first, he roasted right guard Marshall Newhouse and took advantage of Newhouse both lunging and putting his head down. On the second rep, Ryan Groy put up a good fight initially, but once Washington countered he was in the backfield and narrowly got the victory -- and that was over the team's current starting center (at least for the last two days). Washington has always shown flashes of brilliance, whether it was in his college tape or his first two years in the NFL -- the talent shows up every once and again. The trouble is, that talent that shows up just hasn't been there consistently enough, which is why he's likely fighting for a roster spot in 2018. If Washington can string more practices together like the one he had on Thursday, he'll have no worries at all. He needed a strong performance, and he handled his business on Thursday.

6) Another day, another Edmunds big play
- Usually, it's pretty tough for either a running back or a linebacker to have a noticeable impact during an actual training camp practice because it ignores the root of football in this setting. Tackling, and finishing the play make up a pretty significant chunk of the evaluation for those positions, which means it's always smart to wait for the preseason games to get an accurate gauge on where those players rank. However, Tremaine Edmunds has been bucking those trends each of the last three days. He picked off a pass on Wednesday in impressive fashion when he stared down the quarterback's eyes. He followed that up with another one, and a near interception again on Thursday. The first was right at the beginning of team drills when Edmunds broke on a McCarron pass and batted it down, nearly bringing in his second pick in as many days. Within 20 minutes later, Edmunds stepped in front of Charles Clay for an actual interception that he brilliantly read from the arm of McCarron. The Edmunds pick, by the end of it, technically didn't count because defensive holding was called on another defender on the play. However, Edmunds is showing an impressive knack for getting to the football all while displaying good reaction time and instincts for the position -- and that has to be getting Sean McDermott excited for the prospects of his defense. It's impressive watching a player of his size break on the ball that quickly and then showing the athleticism that he does. I'd still like to see what he does when the defense can tackle players, but he's off to a great start this summer.

7) Bills have a clear plan for Conor McDermott
- The Bills gave a rest day to starting right tackle Jordan Mills on Thursday which paved the way for another player to get an opportunity for time with the first-team offense. To start things off, that player was not Conor McDermott -- who I believe to be the third offensive tackle and a pretty solid bet to make the 53-man roster by the end of it all. The right tackle with the first-team offense was De'Ondre Wesley -- a huge tackle that had an impressive spring but a less than impressive summer to this point. However, I don't believe that McDermott not being there right away is a bad thing, and here's why. McDermott, for the third straight day, was working with the second-team offense at left tackle. It is quite clear that the Bills are trying to cross-train McDermott at both tackle positions, and they don't want to sacrifice that just because of a rest day. By the end of the practice, when the Bills did two consecutive rotations of team drills, McDermott wound up taking the first-team reps at right tackle to end things. He's had some learning moments about how to deal with players when they try to get inside his arms and make him lose his leverage, but he's learning every single day, and you can tell by how he has continued to improve. The 6-foot-8, 305-pound McDermott seems to be in the Bills plans as it stands today -- perhaps not as a starter, but in the plans nonetheless.

Day 7 MVP: DT Adolphus Washington
- It was a significant practice for Washington who sorely needed a performance like this one. The big test will be if he can back it up with another great session on Friday.

Day 7 LVP: WR Ray-Ray McCloud
- McCloud struggled to separate and when he did have an opportunity to bring in a reception it went right through his hands. I even saw him muff a catch on a punt return ahead of practice starting -- which was not the first time it happened this summer. Both the rookie receivers, McCloud and Austin Proehl, need to step it up in the preseason games.