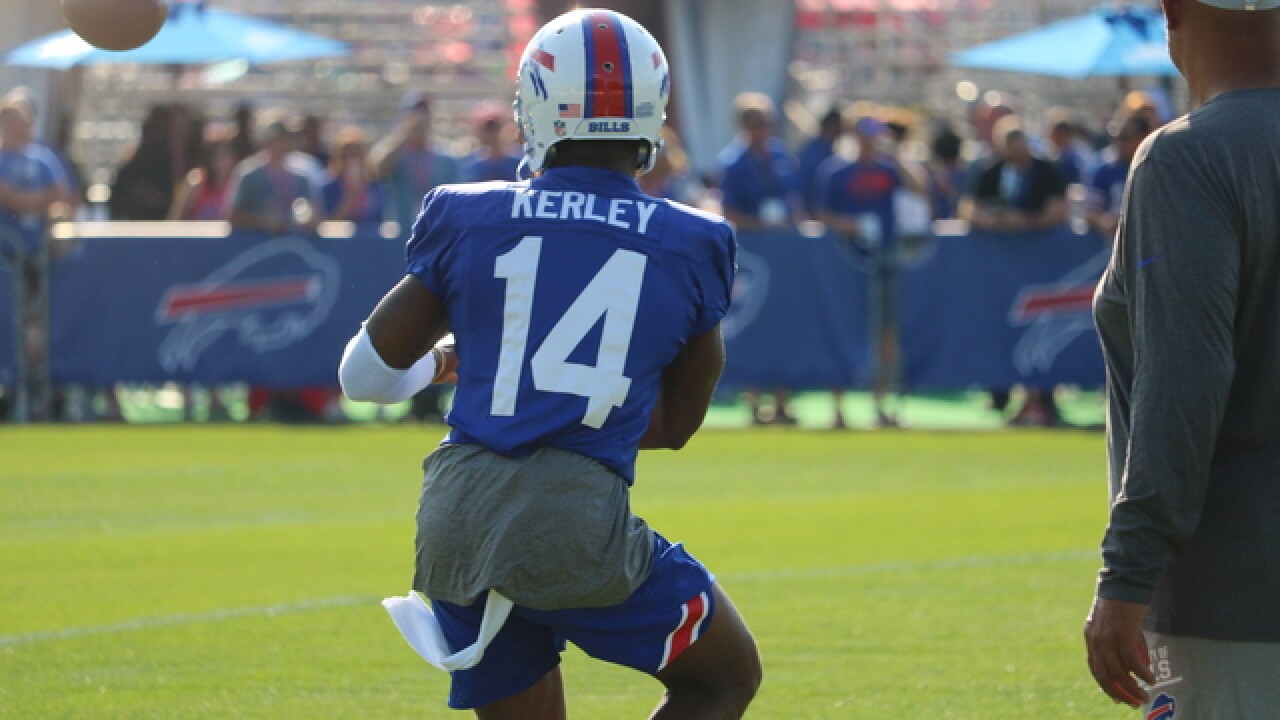 The Buffalo Bills, through their first official day off during training camp, came back to St. John Fisher College on Tuesday for a practice that brought along some change throughout the depth chart, as well as some interesting personal performances.

And for the second straight practice, we had a training camp fight -- this time with punches thrown. It was between left tackle Dion Dawkins and defensive end Eddie Yarbrough and occurred because Yarbrough felt Dawkins continued their 1-on-1 rep just a bit too long.

Outside of the fight, what happened on Tuesday? Seven observations from the day of work:

1) McCarron has his best day of camp
- For the other two quarterbacks during team drills -- which I count far more than the 7-on-7s because, well, the quarterbacks don't have to face a pass rush -- it was a day to forget. Josh Allen and Nathan Peterman went a combined 4-for-10, and Allen's lone completion was a busted play that had him flick the ball to Marcus Murphy, who wound up getting crushed on the play. Allen did throw a nice ball to Kelvin Benjamin, but it would have been offensive pass interference if complete, and therefore rendered moot. However, A.J. McCarron had his best day of training camp so far as the Bills did all of their 11-on-11 work within 30 yards of the end zone. It did not start off well for McCarron, who stared down his target over the middle of the field and allowed safety Rafael Bush to step in front for the interception. After recalibrating, McCarron came back and was outstanding the rest of the way during team drills. He connected with Brandon Reilly and Charles Clay for touchdowns on consecutive throws, and then found Nick O'Leary on a crossing route through the middle of the field and left of the formation for another score. He would have been perfect on his last five throws had it not been for a great play on the ball by linebacker Julian Stanford to break up yet another potential touchdown. All in all, McCarron played incredibly well on Tuesday and showed daily improvement.

2) Edmunds shows both flashes and room for improvement
- Sean McDermott put it best today when asked about what limitations 20-year-old rookie linebacker Tremain Edmunds had. He replied that there were no limitations, but there was also youth along with a healthy dose of inexperience. Fitting that McDermott said that ahead of practice because that's just what we saw throughout the day. Edmunds shined in the daily 9-on-7 drills, making the right reads and hitting the running lane with authority to stop several plays in the backfield. He was flying around on the field, and it was quite impressive. The trouble is, in 9-on-7 drills specifically, there is no illusion that the oncoming play will be a pass. Every defender knows it's a running play, so they don't have to have any hesitation in their movements, making it a bit easier. When the Bills went into regular 11-on-11s, Edmunds still made the correct reads, but I saw him get a little too tight into the lane on a couple of plays, was gobbled up by the lineman, and on one play it was the key block for a touchdown. It's not going to happen all at once for Edmunds, and I'm sure the fact that the play does not finish with live hitting and a tackle probably plays into it as well. The expectations for Edmunds are high, but it's noteworthy to remember that he's merely 20 years old and will make some mistakes. His first few preseason games will be an accurate gauge as to where he's at as a rookie.

3) Is Adolphus Washington in roster trouble?
- Now five days through training camp, we are almost a third of the way done, which means it's starting to go from 'it's still early yet,' to 'opinions are starting to form,' when it comes to individual player performances. The one player that, in my opinion, needs to turn it all around and quickly here at training camp is none other than 2016 third-round pick and defensive tackle Adolphus Washington. To this point in training camp, Washington has been mainly invisible and has only one win during 1-on-1 drills out of a total of 10 tries. His only win by my count came against rookie Wyatt Teller, and the remainder of the time right guard John Miller has dominated him on most reps. If you combine his lack of a presence early on with the fact that the Bills have already started giving Harrison Phillips work at Washington's three-technique position, it all is not adding up well for the past Doug Whaley selection. And to put the cherry on top, think of how many players that Brandon Beane has jettisoned off the roster over the past 12 months that were not selected or signed by either him or Sean McDermott. Washington has to show he can make some plays as the supposed disruptive three-technique defensive tackle, and he needs to start before too many practices elapse at this rate. At this point in his career, I'm not sure what the Bills could get for Washington on the trade market. Based on what we saw last year from Washington and what we've seen so far in training camp, I would not at all be surprised if Washington ends up on the wrong side of the roster bubble when final cuts come down at the end of the preseason. He needs to turn it around and quickly before it's too late.

4) Kerley getting moved around
- The Bills have had a lot of wide receivers line up with the first-team offense through the last few months, which is why it's probably a bit of a surprise for some fans to see how locked in veteran wideout Jeremy Kerley appears to be with the roster. Kerley has been the primary player at slot receiver all throughout spring, and in the first five practices of training camp, and on Tuesday, his role expanded within the first-team offense. Kerley lined up as an outside wide receiver in a two-receiver set, and it was the first time I've seen that on an extended basis. For more proof that Kerley is probably as safe as it gets with his roster standings when the rest of the team gets together for work on special teams, Kerley is along the sidelines playing catch with Kelvin Benjamin.  Those are the actions of usually locked in first-team players that the Bills don't want to put out on special teams coverage units and risk injury. Now, Kerley still might factor into the return game, but that's about it for his contributions to that side of things.  I think of Kerley the same way as what we saw with Leonard Johnson from 2017 -- a veteran player on a short-term deal that locks into their role early on because of an overall lack of depth on the rest of the roster. The offense is behind the defense from a whole talent perspective, which is why Kerley has been able to do what he's done so far.

5) Kyle Williams looks refreshed
- Through the first three practices, Kyle Williams didn't look like the same player we've always known him to be. Now, this could have been for many reasons. He's getting up there in age, or maybe he's being smart about expending his energy in practices and not taking as many reps,  or perhaps he's just easing into the rigors of camp. However, with a rest day given to him on Sunday and then an off day on Monday, Williams came back on Tuesday with a quickness much more like the player we've all grown accustomed to over the years. Now, I don't think it's fair to expect him to be the player he was three or four years ago just because time takes its toll on all of us. However, those flashes are still very much there for Williams, and it was a positive sign to see him show that he could still dominate at the point of attack in a 1-on-1 situation. The Bills should probably limit his reps a bit more this season than they did in 2017, but there's still quite a player coming back in 2018 -- they need more strategy for him this time around.

6) Signs of the 'big nickel' are here
- A staple of Sean McDermott's defense in Carolina over the years was the usage of a smaller linebacker or a bigger safety to cover a receiver in the slot -- not to sacrifice their ability to stop the run just because there was a third receiver on the field against a much smaller cornerback. The Bills didn't have the depth or the personnel to use that type of player in 2017, but that seems to be changing this season. On Tuesday, I saw the first extended sign that the 'big nickel' would be a part of McDermott's repertoire in 2018 when backup safety Rafael Bush started working in as a third safety on the field. Bush would line up over the slot receiver in the red zone area. Bush, Dean Marlowe, and even rookie Siran Neal all seem to be candidates to fulfill that type of role should the Bills choose to use it during games. We've been waiting a long time to see it used quite a bit, and there it was on Tuesday.

7) Full change along the second-team OL
- The Bills are experimenting with their reserve offensive linemen to see who can do what, and how much they can do. With the second-team offense, every single position had a different player than what it was during the team's last practice on Sunday. Conor McDermott flipped from right tackle to left tackle, rookie Wyatt Teller switched sides from right guard to left guard, Ryan Groy took his turn with the second unit at center, De'Ondre Wesley kicked back inside only this time to right guard and not left guard, and Marshall Newhouse switched from left guard on Sunday to right tackle on Tuesday.  The Bills probably want to have their backup offensive linemen be much more versatile than what they had been dealing with during the 2017 season, which is why the guards and tackles have all played a minimum of two positions through the first five days of camp. I wouldn't expect to see the Bills keeping a double-digit number of offensive linemen like they did last season, and this is indeed evidence to support that theory.

Day 5 MVP: QB A.J. McCarron
- He threw the interception early on, but he was great in team drills from that point forward. He has gotten better day by day.

Day 5 LVP: G De'Ondre Wesley
- After two days of struggles at left tackle, the Bills moved Wesley back inside to guard. Wesley seemed a bit more comfortable inside at guard during the first two days of camp, but he served up some bad losses on Tuesday as well. If the decision is between Wesley and Newhouse, Newhouse has him at this point.

To see the full depth chart from Day Five of practice, click here!