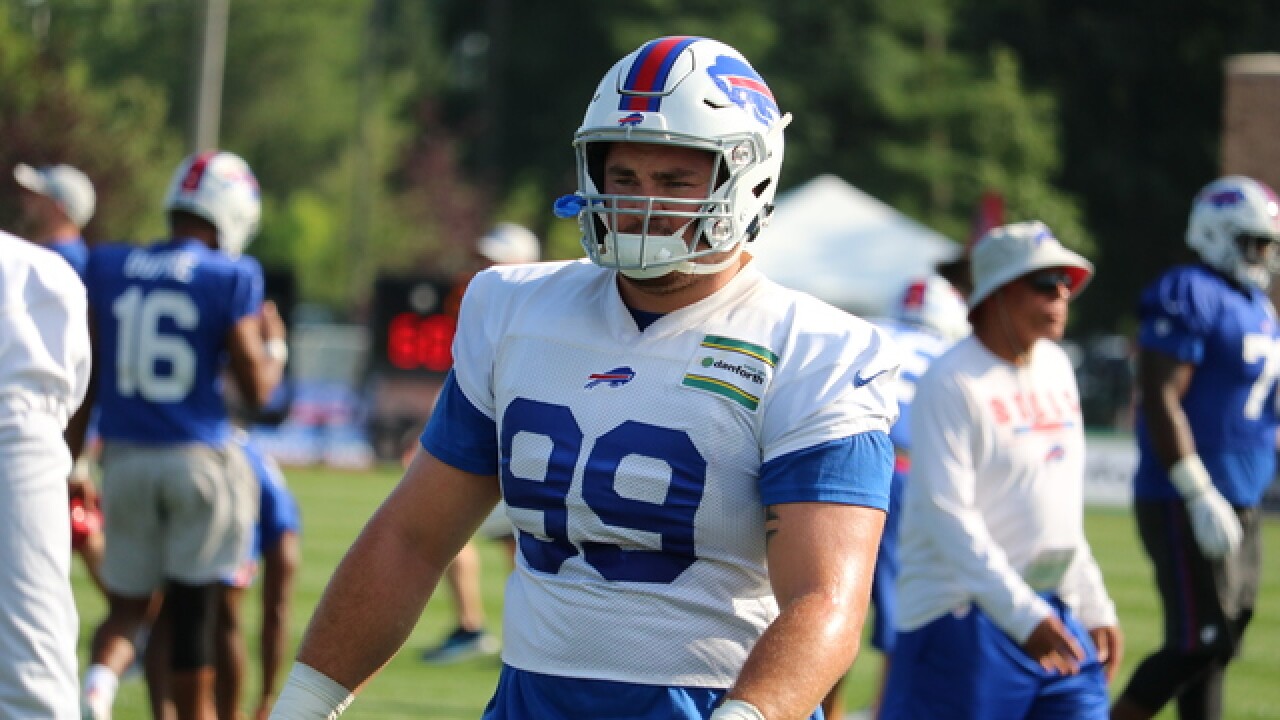 The Buffalo Bills have finished their first four practices, which means they have now reached the official first stopping point of training camp. The Bills will take Monday off to recharge their batteries, but before they get to that, first was another padded practice that yielded some intriguing results.

We saw the first scuffle of training camp (between noted training camp scufflers Jordan Mills and Jerry Hughes), as well the first rest day for the player -- Kyle Williams -- that will probably receive the most rest days of any player on the team.

Besides those two things, what happened on Day Four of training camp? Seven observations from the day of work:

1) Bills giving Phillips more responsibilities
- Ahead of practice on Sunday, the media had a chance to speak with Bills defensive coordinator Leslie Frazier. Considering what we've seen so far from Harrison Phillips at camp -- a disruptive force from the interior -- I asked Frazier if the Bills would consider giving Phillips some time at the more disruptive three-technique defensive tackle role, rather than his space eating responsibilities as the one-technique. Frazier said that they didn't want to overload him at this point, so young into his first training camp. Lo and behold that not even an hour later over on the practice field, with Kyle Williams getting a rest day, there stood Phillips playing the role of three-technique defensive tackle. Not only did they move him there, but they even gave him first-team reps at three-technique and split them with Adolphus Washington. The move is a significant development so early into Phillips' career for many different reasons. For one, his performance has been so good at training camp that they want to see what else he can handle. Second, he had shown the Bills that there was more to him than just a space-eating lineman when the pads went on. Third, if Phillips does well with his reps at that position, it can pave the way for even more time on the field in his rookie year. And lastly, this development is not a great indicator for the job that Adolphus Washington has done as Kyle Williams' immediate backup. We'll have to see if this continue for Phillips, but I find my eyes continuing to go to him for a flashy play. It's still early, but he has certainly looked the part. The Bills have to be quite optimistic about what they have in Phillips.

2) McCarron has the best day of the bunch, but Peterman improved, too
- On Sunday, the Bills went through a practice without giving rookie Josh Allen any first-team reps during team drills for the first time since Day One. A.J. McCarron took all of the first-team reps during Day Four, and I think he had a much better showing than the previous practice. McCarron is still a tad slow in deciding to throw on some plays for my liking, but when his first read is there, he showed good accuracy on throws that traveled beyond the line of scrimmage -- something he didn't do much of on Saturday.  McCarron also took two more sacks on Sunday, bringing his total for the last three days to seven, which means he has been called down in the backfield seven times out of 29 dropbacks. Thanks to my handy-dandy calculator that means McCarron was brought down on 24.1-percent of his dropbacks. That isn't ideal. However, he was pushing the ball down the field more than he did on Saturday -- which is encouraging. As for Nathan Peterman, I thought he had his best practice of training camp so far. He looked a lot more comfortable in the pocket than he had the previous three days. It certainly helped that with his first throw in team drills he tried to hit Robert Foster on a deep post over the middle of the field, and while it fell incomplete (for his lone incompletion of the day, mind you), it showed he still had the confidence to try and push the ball down the field. Other than that throw, he was hitting his targets in stride and setting up plays nicely. As long as he stays more collected in the pocket than he had previously, he should have more days like Sunday.

3) Is Zay Jones getting closer?
- The Bills didn't get the news they had hoped for with Zay Jones when camp opened up, having to place him on the Active/Non-Football Injury list to start things. Jones has now missed the first four practices, but he's been quite visible over the last two. Especially on Sunday, Jones was taking part in all the stretching drills and vigorously stretched out his legs -- a good sign for someone dealing with a knee injury. The Bills also had him doing sprinting drills from sideline-to-sideline as the rest of the team was going through positional work, which is another sign of progress for the former second-round pick. Jones has to hope that he's very close to a return because, in a wide open room, he is falling behind the top of the position by not being available. The more time he misses, the less I believe that he's automatically going to walk in as a first-team wide receiver once he's cleared to practice. The top four guys, Kelvin Benjamin, Jeremy Kerley, Malachi Dupre, and Andre Holmes have all done a solid job to begin camp. I would not be shocked if Jones had to work his way up the depth chart with all the time missed since the end of the 2017 season. The one common denominator: Jones needs to get back on the field as quickly as possible.

4) A no contest for the two guard spots
- Heading into the spring practices, one of the thoughts regarding the offensive line was that both of the starting guard spots would be up for grabs following the exit of Richie Incognito. Through those practices, and now through four training camp practices, that couldn't be further from the truth. All Vladimir Ducasse (left guard) and John Miller (right guard) have done is taken every single first-team rep, they've looked confident and capable, and they've left no room for a backup player to try and steal some reps. Since entering the starting lineup in Week Five of last year, Ducasse has been a reliable starting option and will continue to do so into the 2018 season. As for Miller, he's done a complete turn from what happened last season. He quite literally hadn't lost a single one-on-one rep until one-on-one wunderkind Harrison Phillips bested him Sunday. Unless one of these two starts faltering in a big way, these competitions are anything but that.

5) A switch on the running back depth chart
- After LeSean McCoy and Chris Ivory with the running backs, quite a bit of uncertainty surrounds the remainder of the group. To this point, the third running back on the depth chart has been Travaris Cadet as he's been working quite a bit with the second-team offense. That also had been the case for veteran running back Taiwan Jones -- that is, until Sunday. During Day Four's practice, it was Marcus Murphy getting reps ahead of Jones and with the second-team offense. Furthermore, Murphy received his first reps with a punt coverage unit -- which could be an indication that they like what he's done on offense and are now trying to see if he can fit into a special teams role, as well. There also may have been a catalyst for the change. I don't think it's a coincidence that the day after Taiwan Jones had the ball stripped from him during a rep in team drills, he found himself working with the third-team offense more often than not. The Bills likely have the room to keep four running backs on this year's 53-man roster, meaning a switch like that one is significant in the grand scheme of things.

6) One tight end moves up
- The unfortunate part of training camp is that injuries will always be a part of life. Those injuries also then yield opportunities for young players to have a favorable light shown on them after those opportunities hadn't previously existed. On Sunday, the Bills saw a player miss time due to an injury suffered at camp for the first time, as tight end Nick O'Leary had to sit out of practice with a foot injury.  That helped bump up Logan Thomas to getting some more work with the first-team -- which was expected. However, it also confirmed something that occurred during Saturday's practice, too. Second-year player Jason Croom was working with the second-team offense for the second straight day -- and that started happening even before the O'Leary injury. Croom had started camp working with the third-team offense but started to get some second-team time ahead of Khari Lee. And now if Logan Thomas, who suffered an injury late in Sunday's practice, has to miss any time, that could be a humongous opportunity for Croom to even get in some work with the top offensive unit. Croom has shown well at camp so far, including an excellent over the shoulder catch on Sunday. The former college wide receiver needs to string more solid performances together to convince the Bills to keep him on the 53-man roster -- but he's off to a good start.

7) Patience pays off for Mike Love
- This story is one of those things I just had to write about in the observations column. I make it a point to watch every last one-on-one rep between the offensive and defensive line, to get a handle on how each of these players reacts to specific moves. Part of it is also seeing how many reps these guys get, and in some cases, how little they get. Through the first three days of training camp, undrafted rookie defensive end Mike Love did not get a single opportunity in the one-on-one drill. Heck, even on Day Two, he was down in a three-point stance ready to go, before head coach Sean McDermott came over and made sure that center Adam Redmond got an additional rep -- which happened right before the horn blew to signal the day was over. On Day Three, fellow undrafted rookie defensive end Mat Boesen got his first rep, while Love didn't and stood in the back with his teammates. Sunday was finally his day to get a rep, and he certainly made it count. Going up against right tackle Conor McDermott, Love let the tackle get too far back in his kick slide, and pulled off an inside juke move and into the backfield without much fight from McDermott. After all those days of not being able to show what he could do, that rep had to feel pretty darn good.

Day 4 MVP: RB LeSean McCoy
- McCoy flat out embarrassed Ramon Humber on a one-on-one pass catching rep, and showed a great burst in the little work he had during team drills.

Day 4 LVP: RT Gerhard de Beer
- It was a struggle all day long for de Beer in pass protection. He's having a hard time shifting his weight down and anchoring, and opponents are bull rushing him into the backfield. He has to find a way to counter this move or else they'll continue to beat him.

Up Next: The Bills have the day off on Monday. They resume practice on Tuesday, July 31 at 8:45 am. Tuesday's practice is closed to the public.