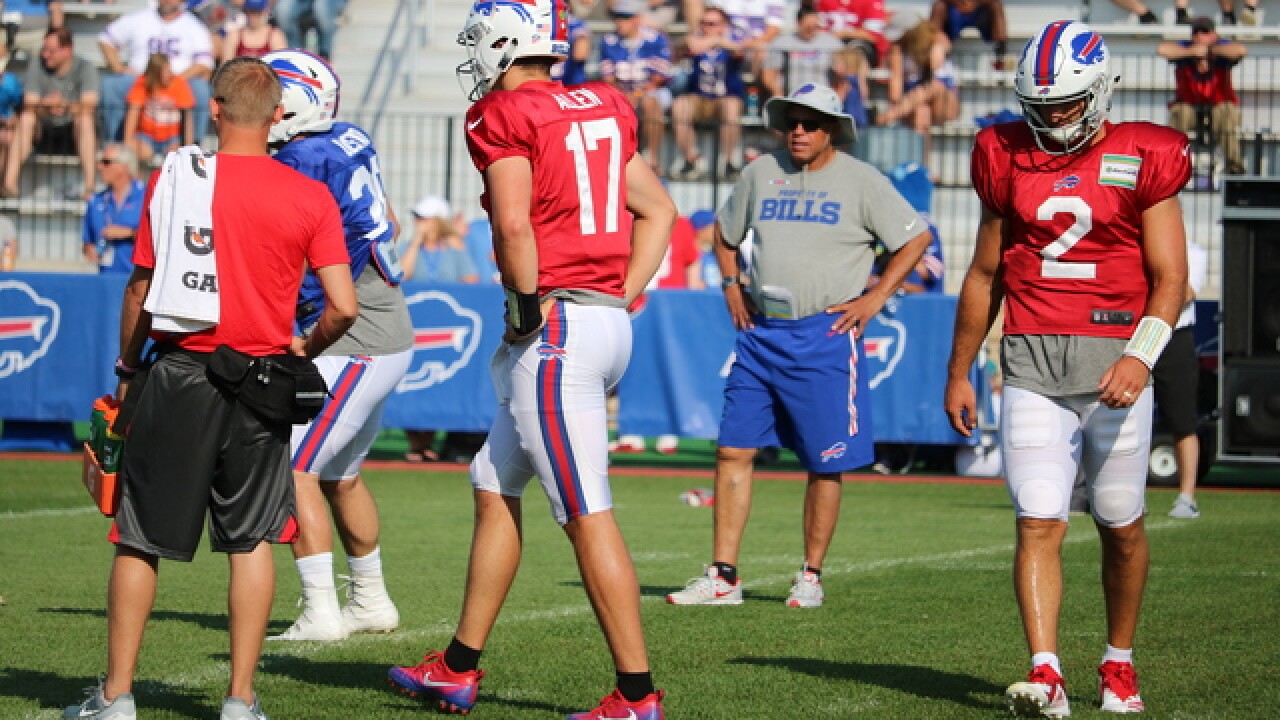 When the pads go on during training camp, it goes from some muted form of the game to actual football -- and it's really from that point on when jobs will be won or lost by the individual players of the team.

And on Day Three of camp for the Buffalo Bills, the pads officially went on. We saw a little more physicality, a bit of intensity, and some discernible performances as the practice marched forward.

Who stood out, both for good and bad reasons? Seven observations from Saturday's practice:

1) The Josh Allen Experience
- Fans in attendance on Saturday saw to the sincerest form of Josh Allen -- at least the one that he portrayed during his college days. Early on during individual drills, he misfired a few rockets to his receivers that made them work a bit harder than they needed to. However, once it got to team drills, Allen started to shine. His first throw was an on-point slant route in tight coverage that the defensive back barely got a hand on to break it up. Then he read the next play correctly -- a pick play that freed up wideout Kaelin Clay on a wheel route -- and Allen put the perfect touch on the throw to hit Clay in stride, and he quickly ran into the end zone for a touchdown. The very next play, he made a fantastic anticipatory throw to Cam Phillips on a comeback route to the left sideline that was there as soon as the wideout turned. Allen was feeling himself, which is what led to the next part of the Josh Allen Experience. The next play, Allen spotted his target in the end zone on an out route, stared him down -- to which cornerback Ryan Carter baited him and quickly jumped in front for the interception. That play was entirely on Allen. However, his next round of reps was with the first-team and went well. His lone missed attempt went for an interception on paper, but it was on a throw that you'd want your quarterback to try in that situation. Allen threw a jump ball to the 6-foot-5 Kelvin Benjamin, to which most times the receiver will come down with the ball. It was tight coverage and went off his hands not once, but twice, and hung up in the air -- to which Jordan Poyer came over and caught the pass right before it hit the ground. That throw is one that was not made enough over the last three years, so I'm not going to fault him for it. All in all, his day ended 5-of-8 with one touchdown and two interceptions, with only one being his fault. He had the best practice of the group on Saturday and has been the best quarterback at camp thus far.

2) McCarron playing it safe
- It's a bit frustrating with A.J. McCarron. Every once and again he'll see his first read and make a great throw down the field that makes you want to see more, but the remainder of the time shows a version of McCarron that is playing not to lose the job. The trouble is, that mentality might also cause him to lose the starting competition. So far in camp, McCarron hasn't taken a lot of chances. He's held on to the ball long and more often than not settles for a short throw. On Saturday we found the height of that style of play from McCarron who completed 5-of-6 pass attempts in practice. The trouble is, he completed all five passes behind or just a few yards in front of the line of scrimmage, which makes his completion percentage look a lot less impressive. On the lone pass attempt that he didn't complete, that was the only time he tried to push it down the field. He held on to it too long, the middle linebacker Tanner Vallejo read his eyes and jumped to bat down the pass. McCarron's other three dropback attempts went for three sacks -- which brings his total from the last two practices up to five. In comparison, Josh Allen and Nathan Peterman have only been called down for a sack once over the previous two days. Even though McCarron is completing the most passes, he has not been the most impressive quarterback. If he doesn't open it up a bit as camp goes on, there's a chance he doesn't win the starting job to open the season.

3) Peterman looks nervous
- Training camp is three days old which is enough of a sample size to conclude that Nathan Peterman has not looked like the same player that he was during spring practices. Peterman showed confidence in his arm, touch on his throws, and a deep understanding of the playbook during the spring. In his first three days, Peterman has panicked in the pocket a bit and looks a little nervous to my eye. As a result, his accuracy has suffered, completing only 6-of-14 pass attempts over the last two days. To his credit, he is trying to push the ball down the field. However, sometimes the pocket gets so muddy around him that he gets some happy feet, and it causes his throw to go haywire. It is still incredibly early in the summer of work here, but at this point, Peterman has been the third-best quarterback during training camp.

4) Harrison Phillips dominates the 1-on-1s... again
- During practice, I make it a point to watch every single rep of 1-on-1s between the offensive and defensive line and track the results. Through the first two days without full pads, rookie third-round pick and defensive tackle Harrison Phillips has been a standout -- most notably for how well he did during the first practice. However, with all pads on, Phillips stepped up his game even more on Day Three. He had two reps in total, to which he won both, and both times left his opponent on the ground as he was quickly in the backfield. On the first try, Phillips gave a quick swim move to Ryan Groy that dropped the hopeful starting center on the ground immediately. A little later on, he went up against Marshall Newhouse who was at left guard. Newhouse put his hands out to engage, to which Phillips used a vicious chop with his hands that dropped Newhouse right then and there, and he was in the backfield without much of a struggle. The Bills haven't tried him at three-technique defensive tackle just yet, but his disruption skills are begging for them to give him a look there. He's had an incredibly strong start to training camp.

5) Top four wide receivers identified through three days
- The wide receiver rotation through the first three practices has been a bit all over the place for the most part. That is, except for four players that have been consistently getting work with the first-team offense ahead of all the others. That includes Kelvin Benjamin, Jeremy Kerley, Andre Holmes, and Malachi Dupre. Others have filtered in here and there, but by and large, those have been the core four as Zay Jones has been out due to his knee injury. As for the rest of the position, the players have been floating between the second and third-team offense every single day. Rod Streater and Brandon Reilly have mainly worked with the second-team offense, but others have gotten a lot of runs there as well. The Bills have also switched the roles of Austin Proehl and Ray-Ray McCloud -- the two wide receiver draft picks from April. On Friday, McCloud was in the slot with Proehl on the outside, while on Saturday it was the opposite. All that work came with the third-team offense. True to form, the wide receiver spot has been completely wide open which means it's an incredible chance for some of these players to win a spot on the 53-man roster.

6) A changeup on the offensive line
- The Bills have been relatively consistent with the offensive line rotations. The only thing that has changed from one day to the next has been Russell Bodine and Ryan Groy splitting reps with the first-team offense at center. However, the Bills tinkered one minor thing on the second-team offense Saturday by flipping De'Ondre Wesley outside from left guard to left tackle, while veteran Marshall Newhouse moved from left tackle to left guard. The results for both players were not that endearing. Both players looked a bit uncomfortable with their assignment for Saturday, and some of the things they could get away with at their previous position were exploited on Saturday. It was done to see the versatility with both players as reserve offensive linemen. However, given the performances, I wouldn't be surprised if we see things return to normal with those two players on Sunday.

7) The core special teams coverage players identified
- On Friday, we got our first look at the top punt coverage unit for the Bills, and during Day Three's practice, it provided the first glance at kickoff coverage. For those that didn't see yesterday's observations, you might be wondering, why is this important? The top special teams' units for kickoff coverage, punt coverage, kickoff return, and punt return can provide significant clues as to what the team might be thinking at the bottom of the roster when they have to make final cuts. We haven't seen either of the return units just yet, but with the two coverage groups, there were six players present with both of the top units. That list includes wide receiver Andre Holmes, linebacker Julian Stanford, linebacker Ramon Humber, linebacker Deon Lacey, safety Dean Marlowe, and cornerback Phillip Gaines. If any of these six are on the return units as well, you can be sure that they're highly thought of by the Bills at this point.

Day 3 MVP: LT Dion Dawkins
- In 1-on-1s, Dawkins has been perfect so far -- getting the better of Jerry Hughes all five times and then thwarting Eddie Yarbrough today on attempt as well. He's looked confident, cool, and collected, and he even transferred that into team drills on Saturday -- which was an improvement from what happened on Friday.

Day 3 LVP: OL De'Ondre Wesley
- In his first practice of camp at left tackle, Wesley struggled both during 1-on-1s and in team drills, consistently allowing pressure to his assignment. Maybe it was nerves of it being the first padded practice, but Wesley has looked much better at guard.