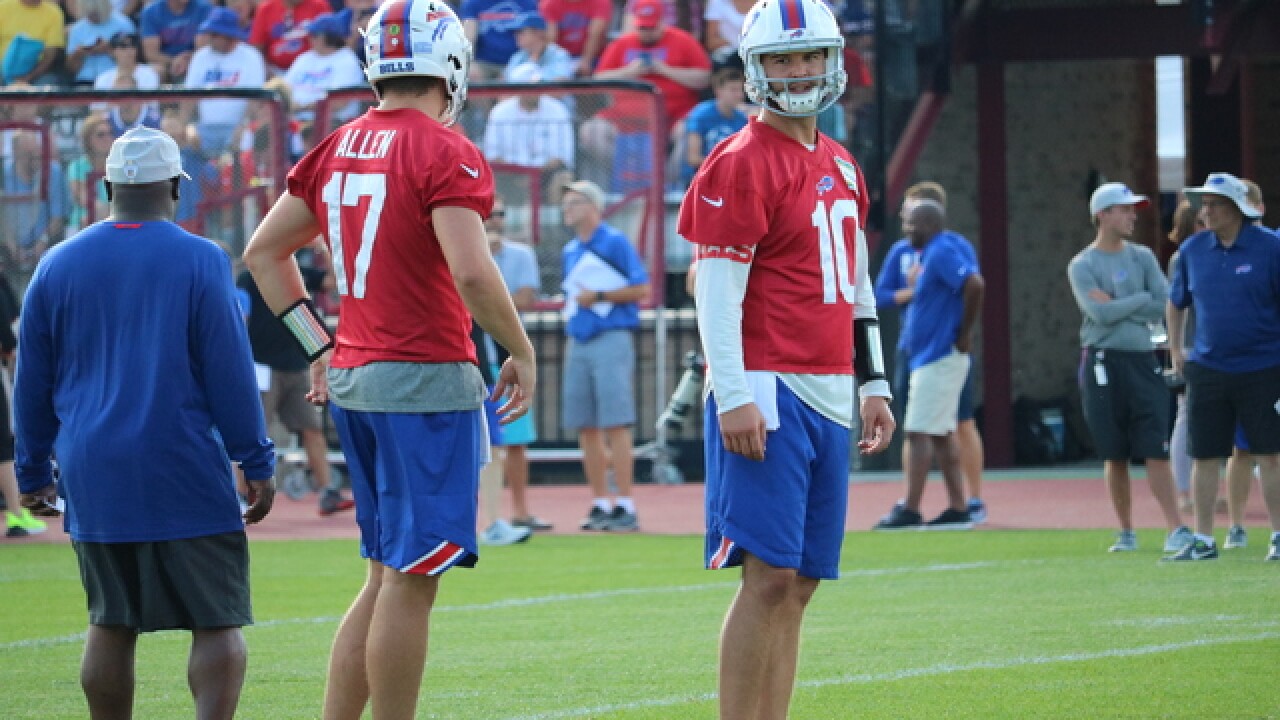 Less than 24 hours after the first preseason game of 2018, the Buffalo Bills returned to the practice field in Orchard Park for Day 12 of training camp. Although they had to practice without some players that had been injured against the Carolina Panthers, we saw the return of some others to practice and even team drills.

On Friday, we also learned how the Bills are approaching the quarterback position following the first preseason game.

What stood out? Seven observations from a relatively light day of practice:

1) The QB rotation rages on
- The Bills have been quite tight-lipped as to their plans at the quarterback position, and that continued into Friday even before practice. Just moments before the media went out to practice, head coach Sean McDermott still wouldn't yet announce who would be getting first-team reps at the oncoming practice. The Bills went right back to the same rotation that we've seen from them during the summer, meaning at least through Friday, there weren't any movements one way or the other based on the performances they saw against the Panthers. Since Nathan Peterman took first-team reps during the game, that meant it was A.J. McCarron's turn to work with the first-team on Friday. McCarron took every single rep with that unit minus the two that they gave to rookie Josh Allen. Peterman worked with the second unit, and the third-team offense didn't get much work during the practice which meant Allen's reps were limited. Should we see the rotation return to normalcy after a day off on Saturday, it would seem that the safest logic would be that McCarron gets the next start against the Cleveland Browns. However, with how little the Bills want any quarterback related decision to be out there, we don't have much more to go on than educated guesses.

2) Zay Jones works in with the first-team on first team drills
- In the lighter practice, the Bills decided to ramp up the workload of wide receiver Zay Jones on Friday. For the first time since he returned from a knee injury that landed him on the Non-Football Injury list, Jones worked into team drills -- a definite positive step for Jones in his attempt to come back. And it wasn't just that he took reps, it's who he lined up with that gave us a glimpse as to the Bills' immediate plans for Jones upon his full return. Jones, the former second-round pick, only worked in with the first-team offense -- which is a clear indication that the Bills want him to factor in heavily almost immediately. Should he rise to the challenge, the Bills are likely hoping that Jones becomes a Top Four starter at least, and preferably the starter opposite Kelvin Benjamin. We'll have to see what they do once he is allowed to be involved in a full-contact practice, but the initial placement of him in team drills seems like they aren't going to make him work too hard for one of the top spots.

3) Corey Coleman gets a bump up in team drills
- While he didn't play on Thursday night against the Panthers, Corey Coleman did at least practice on the Tuesday before the game and got in some work with the third-team offense. That was the last we've seen of him, but on Friday, Coleman took a step up on the depth chart. The recently acquired wideout started working in with the second-team offense as one of the base receivers. As he continues with the playbook and getting more comfortable with his new surroundings, I'd expect the Bills to put more on his plate increasingly. He's going to have an incredibly emotional night in Cleveland in the Bills second preseason game, and with his current standing, he's likely to get a ton of work as well.

4) Shaq Lawson flaunts his newfound skill yet again
- Since Trent Murphy went down with a groin injury, Shaq Lawson has gotten a humongous opportunity to get some first-team snaps consistently with the defense. And to his credit, he's taken full advantage of the chance and has shown off a new part of his game that we haven't seen quite consistently. Lawson, as he did in the game on Thursday and in plenty of practices during camp, has shown the ability to read the passer and time the throw for him to jump up and bat down the pass. While it isn't a sack, it's still an incredibly useful play that results in a loss of down for the opposition. Entering a weighty third season for his career with the Bills, Lawson has shown so well that he's now a definitive piece of the defensive line rotation -- factoring in both at defensive end and at defensive tackle on obvious pass-rushing situations. As long as he continues his strong play, the former first-round pick is here to stay in 2018.

5) Jerry Hughes took over team drills
- While he didn't get much time on Thursday night, Jerry Hughes had enough time on the field to show that he still has the same pass rushing ability that we've seen from him for years on end now. And it wasn't just on Thursday in the game, Hughes wholly owned the last first-team reps of practice. It was a two-minute drill, and Hughes whipped around left tackle Dion Dawkins three times in a six-play span to get in the backfield and rack up a sack. It was a non-padded practice which means there wasn't as much contact as in the more intense practices, but Hughes was working his way in seemingly unimpeded on Friday

6) Nick O'Leary's interesting placement
- I'd like to preface this by saying that we shouldn't rush to judgment based on just one practice, but I did see a somewhat different rotation at tight end during team drills. Charles Clay, like always, was the first player at the position to get a rep. After him, though, is when things got interesting. Logan Thomas worked in with the first-team offense, as did Jason Croom, and even Khari Lee for a play although he was out there less than Thomas and Croom. Nick O'Leary, usually the second tight end behind Clay, worked only with the second-team offense and was subbed out for Lee and Keith Towbridge. Now, seeing as how this may well be a byproduct of the Bills using only the first and second-team offense for team drills on Friday, the real test will be if that rotation stays the same on Sunday when things return to normal, and they practice in full. No matter what, it wasn't where he usually lined up which is why it's noteworthy in the confines of a shorter practice like this one.

7) Trent Murphy gets back on the field
- Over the past week, we've seen Shaq Lawson impress in his work with the first-team defense, and that was because the Bills have been without regular starter Trent Murphy because of a groin injury. Murphy has slowly been working back along the sideline, and for the first time since he sustained the injury, he was back on the field on Friday for practice. Murphy worked through individual drills, though he didn't work into team drills at all on his first day back. Even still, it's a good sign especially ahead of a one-day break and the start of a new week of practice. The Bills invested quite a bit in Murphy this offseason, and they need him to open up the season if they want to fulfill the potential that they have on defense.

Day 12 MVP/LVP: It was a light practice, so we'll leave the MVP and LVPs for when they get back to St. John Fisher College on Sunday.

To see the full depth chart from Day 12, click here!