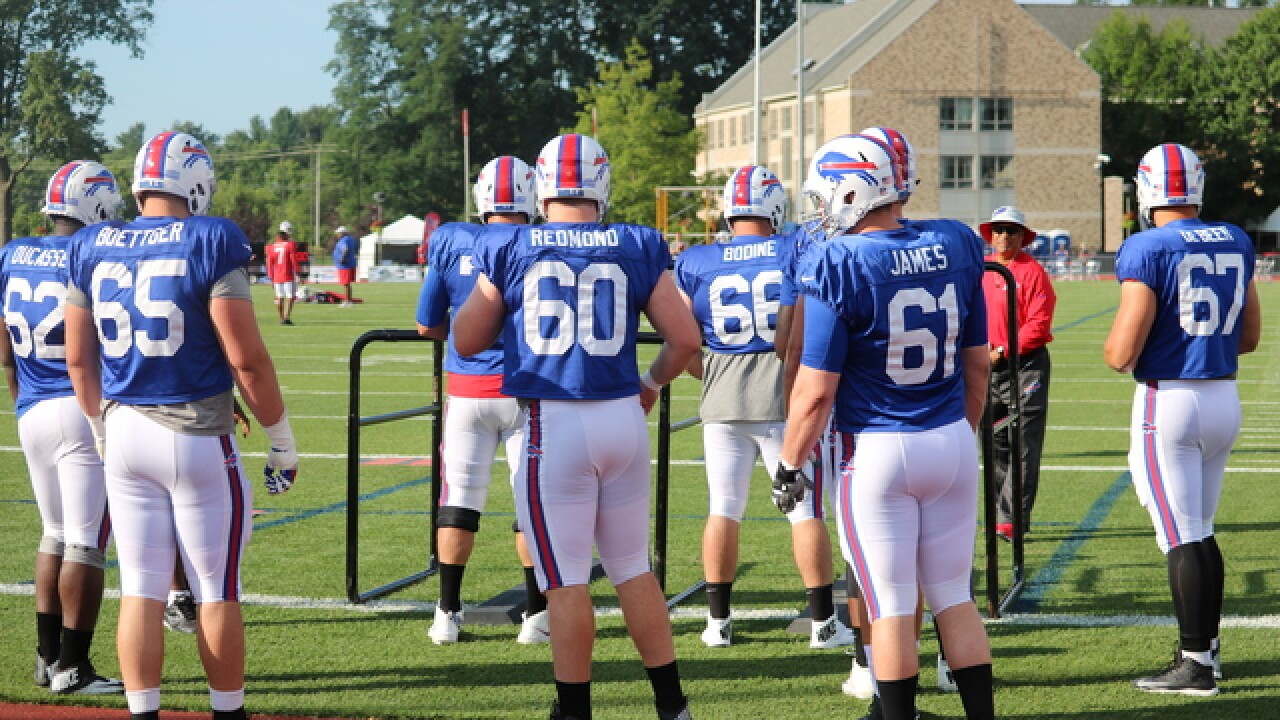 The Buffalo Bills officially reached the double-digit mark for practices in training camp for the buildup to the 2018 season. They had their second-to-last practice Monday before the first preseason game of the year, and with it, saw a definitive step up in the passing offense from what had been seen the previous day.

The Bills also traded for Corey Coleman, though he wasn't in attendance for the practice due to him traveling from Cleveland.

What stood out? Seven observations from Day 10:

1) What do the Bills have in mind for Corey Coleman?
- Until he settles into his eventual role with the Bills, newly acquired wide receiver Corey Coleman will continue to be the centerpiece of the conversation with Bills fans. The wide receivers, past the top two of Kelvin Benjamin and Jeremy Kerley, have failed to stand out to this point. The Bills, likely seeing much of the same, moved to bring in Coleman a full month ahead of the start of the regular season. Given that they acquired him for merely a seventh-round pick in the 2020 NFL Draft, the Bills aren't going to try to force Coleman into the lineup just because he's new. Coleman, 24, will have a legitimate chance to turn it all around in a wide-open situation with the Bills -- and he could even win a starting job if it goes well enough. However, GM Brandon Beane made it clear that when Coleman gets to Buffalo on Monday, he'll have to earn it just like Zay Jones and all the rest -- regardless if he was a former first-round selection. He has the speed that the Bills were lacking in one of their top options at wide receiver, and that alone could help him into a role as a top-four player on the depth chart. Whether he'll line up on the outside or as a slot receiver, that's something that will be fascinating to track. The good part is that he's still young and will likely have the motivation after being given up on so early into his career. The bad, they might need to help him to be a complete route runner to see if anything is there. Whatever the case, it's worth a swing at a barren position.

2) Peterman, Allen with a bounce-back practice
- On Sunday, the performance of all three quarterbacks was less than spectacular. That day was one of the less impressive days of the group through training camp. However, on Monday, Nathan Peterman and rookie Josh Allen both had one of the better practices of camp thus far. Peterman started off the day completing each of his first seven passes, and they weren't just little dump downs and throws behind the line of scrimmage. Peterman was pushing the ball down the field and giving his targets a chance to make a play where the coverage was a bit tight. He ended the day 8-of-10, but this was as close to the version of Peterman that we saw during the spring. As for Allen, his stat line of 4-for-8 surely doesn't stand out, but it does when you provide the context of it. Two of his incompletions were blatant drops -- one that hit Travaris Cadet in the hands on a perfect deep pass that split the cornerback and safety in zone coverage, and another by Rod Streater that got both hands on it along the left sideline -- and another was a great throw over the middle that cornerback Breon Borders made a great play on to break up. Allen also had the lone touchdown of the day, a fastball that he somehow fed into the gut of Ray-Ray McCloud over the middle of the field while a defender was all over him. Of his 10 practices, this one was right up there as one of his most accurate.

3) Groy works at guard! But, with a catch
- Before spring practices ever happened, there was a distinct belief that Ryan Groy, a popular backup name that Bills fans wanted to know more about, could take over for Richie Incognito as a starting guard. Through all the practices in the spring, and after nine days of training camp in the summer, Groy hadn't received a single rep at guard, dispelling the notion that he could fill that role. On Monday, those fans got their wish, kind of. Groy received reps at guard with the first-team offense for the first time, only when top right guard John Miller incurred an injury that held him out for the rest of the practice. That's important because now we know a bit of their contingency plan -- or at least one that they're thinking about -- if one of their starting guards were to miss any time. Groy also continued to receive some reps at center as well, but it turned into more of a rotation with both Russell Bodine and Adam Redmond to keep everyone fresh. Should Miller have to miss practice tomorrow, we'll see if their first backup plan changes at all.

4) Lacey continues to impress
- At linebacker, the Bills surrounded themselves with a ton of names that could all help out with both the depth and on special teams. However, only one of those backup options has seemed to turn the corner defensively, to the point where it's going to be hard to keep him off the 53-man roster. Deon Lacey, who the Bills brought on just before the 2017 season started to help on special teams, has continued to improve with the strongside linebacker role this summer. Lacey shows strength in his reps and provides some pass-rushing ability, which will likely help him to see the field if anything should happen to Lorenzo Alexander. On his way into training camp, there was a chance that he could be in trouble to make the roster. As they finished the first ten practices, the more and more evident it is that he's cemented himself as both a core backup and a core special teams player. As long as he shows as well during the preseason games, Lacey should be safe for the 53-man roster.

5) Foster fighting the ball
- The Bills, with the release of Quan Bray, the acquisition of Corey Coleman that wasn't with the team just yet, Zay Jones still sidelined during team drills, and with Cam Phillips injured, provided one last big chance for their young wide receivers to make an impression during practice. And once again, undrafted rookie wide receiver Robert Foster left the wrong impression on the coaching staff. You see the speed and the route running ability because he's able to get open. However, when the ball is in the air, that's where things have gone awry for Foster. He tends to try to body catch the ball, and that is likely what has led to some of his issues. When forced to use only his hands to secure the catch, Foster has shown far too often that he'll double-clutch the catch -- which effectively mean he makes the catch initially, but he doesn't have it securely enough and then essentially has to catch it again. That leads to a massive opportunity for the defense not only get back into the play to break it up but to cause an even bigger play by doing what happened on Monday. Foster did the double-clutch, the defender tipped the ball up in the air, and safety Rafael Bush was able to bring in the interception of A.J. McCarron. Foster has seen his reps go down and needs a big preseason to try and fight back into this battle. As of right now, it seems he's on the outside looking in.

6) Shaq Lawson taking advantage of an opportunity
- On the flipside of Foster, former first-round pick Shaq Lawson showed well on Monday. It was quite crucial for Lawson to do so because starting defensive end Trent Murphy had to miss the practice due to a groin injury, which led to more first-team time for Lawson. He's been up and down at camp through the first ten days, but Monday was one of his 'up' days. Lawson did well in team drills to force the pocket back, and he's still cross-training at defensive tackle on third down situations, which means he's still in the plans for a regular rotational role with the team. I'd like to see him be more consistently impactful as a pass rusher, as he tends to try and bull rush his way into the backfield far too often. However, he's playing with confidence and even batted down a pass today, too. Considering how many of the Doug Whaley draft picks he's seen walk out the door, Lawson knows this is a crucial preseason for him and his future with the Bills.

7) A tale of two tackles
- On Sunday, we saw second-year player Conor McDermott work with the third-team offense for the first time since camp begun -- a sign that the Bills haven't been happy with his output over the past week or so. That's just how quickly things change during training camp. McDermott was there once more on Monday, and while he used to have the reputation as the top swing tackle, those honors now belong to De'Ondre Wesley, who has quietly turned around his training camp from an awful start. Wesley has practiced at four of the five positions on the offensive line during training camp, with the center spot being the lone exception. Wesley probably has the inside track at the moment, but I wouldn't write McDermott off just yet. He served up two great reps in 1-on-1s that stopped Jerry Hughes on back-to-back plays, and it fired up offensive line coach Juan Castillo. He's been rocking back in his stance a touch early recently, but when he's relaxed, he's shown he's had some ability. At this point, he's probably battling the mental side of training camp because the ability is there.

Day 10 MVP: RB Marcus Murphy
- The Bills have lined him up a little bit of everywhere, and he continues to make plays. The number '45' is littered everywhere on my notebook from team drills on Day Ten. A younger running back -- which is fairly rare on this Bills roster -- if Murphy's ability shines through during preseason games as a runner, I think the opportunity is there to win the number-three job.

Day 10 LVP: WR Robert Foster
- Foster has dealt with drops all camp long, and his double-clutch during team drills on Monday led to one of the most recognizable plays of the day -- an interception that wasn't the quarterback's fault.

To see the full depth chart from Day 10, click here!