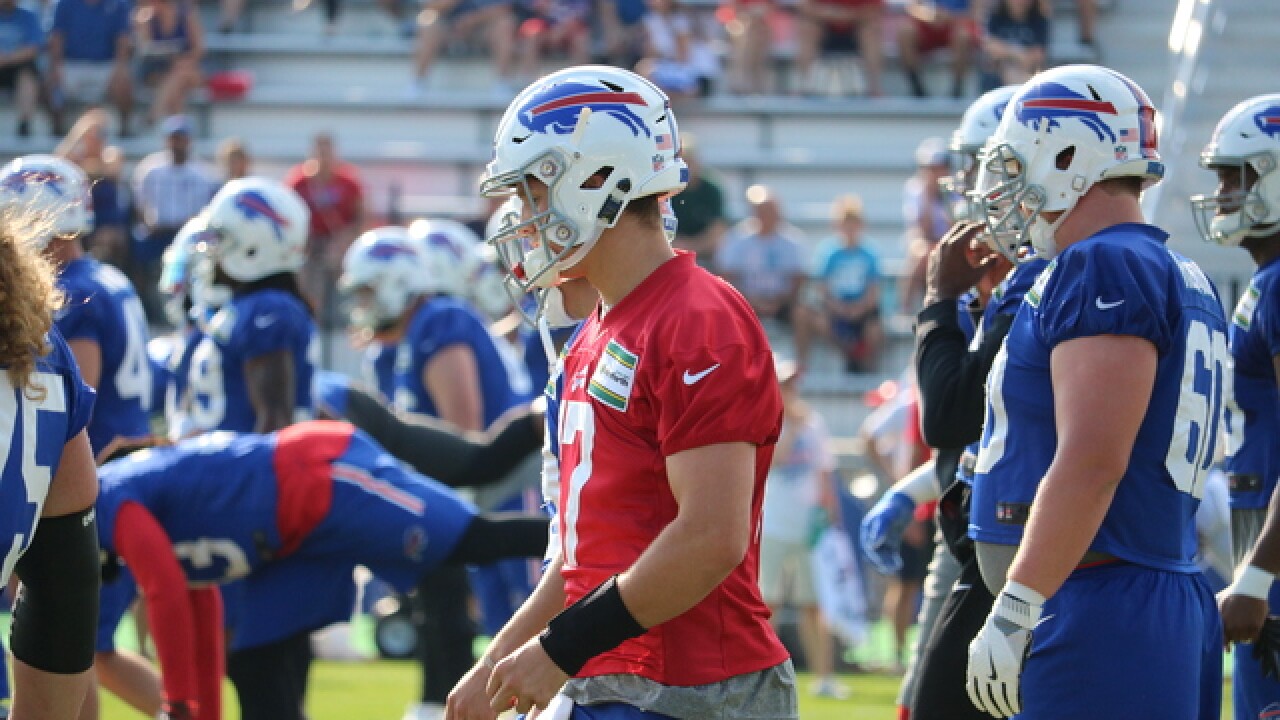 Training camp is back. Finally.

Following a successful 2017 season that resulted in the first playoff appearance for the Buffalo Bills, Sean McDermott's team is back to try and make it two playoff berths in a row. However, this year, there are plenty of changes made to the roster and a lot of jobs to be won in the meantime.

And it starts with one man, the rocket-armed 22-year-old quarterback that the Bills are putting their hopes and dreams on.

How did he do, and how did the rest of practice go? Seven observations from Day One of Bills training camp:

1) Josh Allen fights the nerves for an up-and-down day
- Those fans that came to the first day of training camp for the Bills that were hoping for Josh Allen to blow everybody away throughout the entire practice didn't exactly get that. What they did get was a balanced combination of throws that drew some "oohs" and "aahs," along with others that made fans emit something that sounds like, "ugh." Allen, as the Bills intended, took the first day of camp while working almost exclusively with the third-team offense -- except when the Bills went into offensive walkthroughs, which is when he made his first-team reps. However, it is quite hard to ignore the simple fact that as compared to Nathan Peterman and A.J. McCarron, it isn't even close as to who has the most natural talent on the field of the quarterbacks. Allen is a gifted thrower when he's on target, and he showed it off on two team drill reps early in practice -- both of which to Robert Foster. The first, he floated one in right over the shoulder that hit the receiver perfectly in stride, showing a true touch in his first day. On the other fantastic throw, he hit Foster on a flag pattern to the right sideline -- which is a real strength for him. However, the end of practice didn't go so well for Allen. It was something that was a bit of a bugaboo for him during college, but on two short throws -- one rolling right and right in front of him, and the other a throw to the flat -- Allen airmailed it both times. On the last play of the practice, the Bills called Allen down on a would-be sack. So, again, some good and some bad -- without any interceptions -- but he's got to go through some rookie growing pains. The good news for the Bills is that he was the best quarterback on the field, for what it's worth on Day One.

2) Tough talk from McDermott on Zay Jones
- We don't usually hear head coach Sean McDermott give in on some criticism of players on his team, which is why it was notable about his comments on Zay Jones. The wide receiver is unable to practice after being placed on the Active/Non-Football Injury List. According to Tim Graham of The Athletic, this is stemming from "surgery to repair a deep laceration below his kneecap," which comes from his bizarre offseason incident. When asked if Jones is behind, McDermott answered in the affirmative -- which is not ideal for a former second-round pick that the team had high hopes for in his career. Jones did get some work in on the field after practice, but until he can get back on the practice field, some other young players have an incredible chance to not only take his reps right now but to put themselves in such a good light that they could even take his supposed starting job. Jones needs to get back as quickly as he can because he is missing valuable time from a completely open position.

3) Dupre, Foster gets a big chance on Day 1
- Speaking of the competition for Jones, two young players are doing everything they can to try and continue with their current roles once Jones does come back. Malachi Dupre and Robert Foster, two sleeper candidates of the position, both got work with the first-team offense on the first day of practice. In Dupre's case, he even was out there on the first rep with the first-team offense opposite Kelvin Benjamin, which is a substantial thing for someone that was on the practice squad for most of the 2017 season. Before his injury, Dupre was having a great spring and charged up the depth chart. Now, he did miss one massive opportunity down the field to make a play in double coverage, as the ball popped loose once he hit the ground. However, he's a quick and smooth route runner that has grabbed the attention of the coaching staff in the early stages of camp. As for Foster, he also mixed in with the third-team offense in spots, but right near the start of things, he had some opportunities with the first-team offense in one of the first reps -- which is a good indicator of his current standing. As an undrafted free agent, that's a big step as camp begins -- and his two big plays with Josh Allen will be ones that likely stick in the minds of coaches as they head into the second practice.

4) Harrison Phillips, the 1-on-1 machine
- Before you read anything more, please keep in mind that on the first day of practice, the players are still without pads -- which means it's not nearly as physical as it will be from Saturday through the end of camp. However, after watching the first day of one-on-ones, Harrison Phillips was the clear runaway of a winner. On his first rep he ripped right through Ryan Groy and got into the backfield, and on his second rep, he was in the backfield and past De'Ondre Wesley with ease. For his final rep, Groy put up more of a fight but eventually, Phillips ripped through and got past him. I'll be quite interested to see what the Bills do with Phillips because he's got more ability than just as a one-technique defensive tackle that eats space.  Especially with how Adolphus Washington hasn't taken advantage of his opportunities, I wonder if we might see Phillips on the field a lot more as a rotational backup, at both defensive tackle positions, to maximize his output this season. It's young yet, but it was definitely an impressive first day for the rookie.

5) John Miller shows well on the first day
- I remember the first day of training camp in 2016. John Miller, the second-year player coming off a below average rookie season, went toe-to-toe with the likes of Kyle Williams and an in his prime Marcell Dareus on consecutive reps and won both times. That was the moment where I thought to myself, 'Wow, the Bills might have something here.' As we well know, Miller went on to have a great second season, but then followed it up last year with his worst yet, and it ended in his benching after four games. This year, Miller has a new attitude and another chance at a starting job, and he showed well in his first day once again. He easily handled Adolphus Washington on both of his one-on-one attempts and was also consistent throughout the day of work. We'll see if things change a bit when the pads go on, but Miller has started things off the right way this summer. With rookie Wyatt Teller behind him in the depth chart, he needs to stay on top of his game to keep with the first-team offense as he has throughout the whole spring.

6) Keenan Robinson's role
- When the Bills signed linebacker Keenan Robinson, I was curious as to where they would put him in Sean McDermott's defense. On the first day of practice, Robinson worked in with the third-team defense at weakside linebacker, splitting some time with Xavier Woodson-Luster. What was interesting, though, was that Robinson was in there with third-team middle linebacker Julian Stanford when the defense went to a nickel look, while strongside backer Corey Thompson came off the field. If Robinson has a chance to make the roster, he'll likely need to show well on special teams and to unseat Ramon Humber for the backup job -- which will probably be a daunting task because the Bills were happy with Humber in 2017. I'm also curious to see if they try to work him at middle linebacker as well, but camp is young yet.

7) Oh, hey, a new guy. Where does John Hughes fit?
- Right in the middle of practice, the Bills brought their roster back up to the maximum of 90 players and announced defensive tackle John Hughes as the newest signing. At 6-foot-2 and 320-pounds, the 30-year-old Hughes is more of a one-technique defensive tackle, which means he's going to provide competition for Rickey Hatley near the bottom of the roster. What this also does is free up reps for Harrison Phillips to kick over to three-technique if they so choose, all the while having Hatley and Hughes to take care of the one-technique reps. At this point, I'd consider Hughes very much a bubble player that needs to play his way on the roster.

Day 1 MVP: Harrison Phillips
- The rookie defensive tackles flashed significant disruption ability during the one-on-one drill, which is what helped him claim MVP status for the first day of practice. If he can keep it up when the pads go on, the Bills might have found themselves a player. However, it's way too early for any declarations like that.

Day 1 LVP: NA
- It's Day One, and everyone is getting their sea legs, so I'll wait until the second day to hand out the least valuable player of the day.