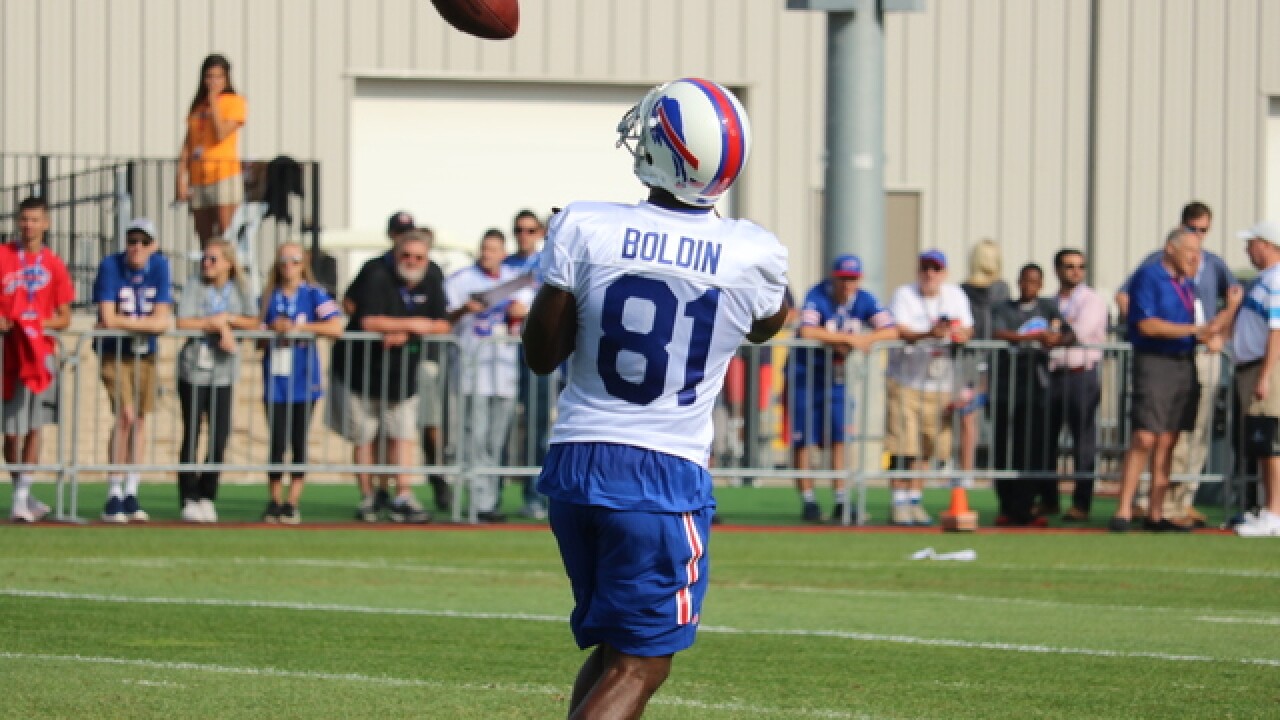 Copyright 2017 Scripps Media, Inc. All rights reserved. This material may not be published, broadcast, rewritten, or redistributed.
<p>Anquan Boldin catches a pass in his first practice with the Buffalo Bills. Photo by Joe Buscaglia, 7ABC Buffalo.</p>

As training camp for the Buffalo Bills is starting to wind down, it was a big day feel for the 11th practice of the summer. It was all due to the first day of practice for the newest member of the team: wide receiver Anquan Boldin. Even though it wasn’t a padded practice, all eyes were on Boldin as he went through and worked in with the Bills.

How did he look, and where did he line up? Who else stood out? Seven observations from the day of work:

1) Boldin mixing in with the first-team right away
- Well, that didn’t take long. Anquan Boldin hasn’t had more than a day-and-a-half, if that, to be in the playbook and study Rick Dennison’s offensive scheme, but that didn’t stop him from taking as many first-team reps as he could. On some two wide receiver sets, Boldin was lined up with Sammy Watkins. Then later on with three receivers in the formation, Boldin was with both Watkins and Andre Holmes. He showed off his size and his natural hands, making a few contested catches throughout the day. After just one practice, it would be foolish to anticipate much else besides Boldin factoring, heavily, to the team’s offensive plans in 2017. Perhaps he plays a hybrid role along with Zay Jones, but it’s clear the Bills have an immediate plan for their newest wide receiver. After practice, Boldin already took control of the wide receiver room, delivering some veteran advice for the wide receivers of the team as they all huddled around him. Jones said Boldin, after only one day, has totally integrated himself, and essentially said that when he talks, all eyes and ears are on him. That sounds like just the type of person Sean McDermott craves for his locker room.

Anquan Boldin on the #Bills, y'all. pic.twitter.com/kQyAMKuPpA

2) For Andre Holmes… now what?
- The player that is affected more than anyone else within the locker room is likely Andre Holmes. Boldin is a clear and immediate threat to his hopes of getting substantial playing time in 2017 — as long as everything holds serve from an injury perspective, which diminishes Holmes’ value on the roster. Although he was still working in with the first-team offense, he has battled the ball all camp long, and it’s likely only a matter of time before they push Zay Jones forward to those three receiver sets. So, what is Andre Holmes’ direct line to making sure he has a roster spot secured by the time the first week of the regular season rolls around? Special teams. He must prove to be a valuable asset in the actual preseason games to make the Bills forget about the potential high compensatory pick they could receive if they were to release him and a pair of other players before the start of the season. If he doesn’t prove it on special teams, in my opinion, the emergence of Rod Streater and the addition of Anquan Boldin — along with Brandon Tate likely taking a roster spot, makes Holmes an expendable piece. This will be one of the biggest things I’m looking for during Thursday’s game.

3) Philly Brown in bubble trouble
- Once upon a time, veteran wide receiver Philly Brown was working with the first-team offense and getting plenty of reps with Tyrod Taylor. Since the start of camp, he hasn’t done much to stand out — even dropping catch opportunities along the way — and now with Boldin, it appears as though Brown has been passed by in a big way.  On Tuesday, which was Boldin’s first day, Brown was dropped down to working with the third-team offense — a serious drop-off from where he used to be. After a slow camp, Brown needs a big preseason to stay afloat in this race for roster spots. If he fades into the background during games like he has in practices, the Bills have several other intriguing options at wide receiver to use a roster spot on.

4) A Ragland fall from grace?
- The wide receiver group wasn’t just one of the biggest developments on Tuesday… what’s happening with the backup options at linebacker should have a lot of fans interested to see where this will go next. Through the first 10 days, the Bills worked Reggie Ragland with the second-team defense exclusively as the middle linebacker. Never with the first-team, never with the third-team… they had a clear plan for him. The trouble is, now they’re starting to look elsewhere, which can’t be a positive reflection on how he’s performed, or how he fits this defense moving forward. When the second-team defense ran on to the field, it was Gerald Hodges playing at middle linebacker. Ragland was working with the third-team defense, and even near the end of the practice during team drills, wasn’t even getting all the snaps with the third-team. He split those reps with Carl Bradford. What’s the potential intrigue with Hodges? He can be a much more versatile backup linebacker who plays all three positions, as opposed to Ragland who is exclusively a middle linebacker in this defense. You can’t only make a judgment on one day of practice, but if this trend continues, the Bills need to start picking up the phone to deal away Ragland if they don’t have the greatest of feelings about him — especially while he still holds some value as an unknown quantity in the NFL.

5) Don’t sleep on Michael Ola
- As I previously mentioned with Andre Holmes, the Bills would have to cut three specific players to get themselves in a position to potentially get a third-round compensatory pick in exchange for losing Stephon Gilmore this offseason. One of those players is backup interior offensive lineman Vladimir Ducasse, who has struggled mightily in training camp this summer. As a result, we’ve seen the Bills cross-train some offensive lineman to establish some versatility, and maybe even give them some other options to consider for the 53-man roster. First, it was Jordan Mudge getting reps at both guard and center, and now, Michael Ola enters the fray. Ola, who had mostly been with a tackle before this summer, has been working at guard in recent days as well. If Ola has the versatility to play both positions, that makes him infinitely more valuable than someone like Ducasse, who really is a guard only. If Ola can prove himself in the preseason, perhaps he makes the team over Ducasse, which would help the Bills in the potential plight for a compensatory pick.

6) Marquavius Lewis, too
- Most of you are probably saying, “Who?” Marquavius Lewis is an undrafted free agent defensive end that has the ideal length for Sean McDermott’s defense along the defensive line. He started camp working mostly at defensive tackle, but in the past two or three practices, they’ve started to move Lewis to the outside to get reps at defensive end. My guess as to why that is? They’re intrigued by his performance in training camp so far, and they want to see if he can serve as that swing defensive end and defensive tackle role at the bottom end of the roster. Right now, that belongs to Ryan Davis, who just so happens to be the third player in the equation to getting that compensatory pick for Stephon Gilmore. Despite being cross-trained at both positions on the line, Davis hasn’t really been anything special to this point in camp. The Bills are probably hoping Lewis, Ola, and Streater can all step up to play at least at the same level as Davis, Ducasse, and Holmes. If they do, that would make their decision that much easier.

7) Dawkins up and down
- The position that seems still firmly up for grabs is at right tackle, though I contend that rookie Dion Dawkins is currently in the lead based on their play at training camp. However, today we saw exactly why the Bills don’t want to fully commit to Dawkins just yet — because he’s still learning as a player. The one-on-one drills today was a direct representation of that. On his first opportunity, Dawkins met Max Valles speed rush attempt look futile, forcing him out wide with excellent feet to get him there. On his next rep, he anticipated a speed rush from Ian Seau too early, and then Seau set him up with an excellent spin move to get in without any delay. It’s the rookie learning curve, and they’re trying to expose him to as many players as possible throughout camp — and that likely extends into the preseason as well. If they had their druthers, they’d want Dawkins to take a firm grasp of this job over Jordan Mills. However, there are still growing pains that he has to go through during the month.

Day 11 MVP: DT Adolphus Washington
- He didn’t make it into any of the seven observations, but I loved the day of practice Washington had. He looked great in one-on-ones, forced the pocket to collapse from the inside, and was even there for stops at the line of scrimmage against the run. He has bounced back nicely from an early struggle at camp.

Day 11 LVP: LB Reggie Ragland
- When you’re a second-round pick that goes from all the time second-team defense duty to splitting reps with the third-team defense, that’s grounds for a bad day.

Up Next: The Bills have Wednesday off, and then get back on the field Thursday, August 10 for their first preseason game against the Minnesota Vikings. Kickoff is at 7:00 pm at New Era Field.