Joe B: 5 things to watch in Bills - Giants 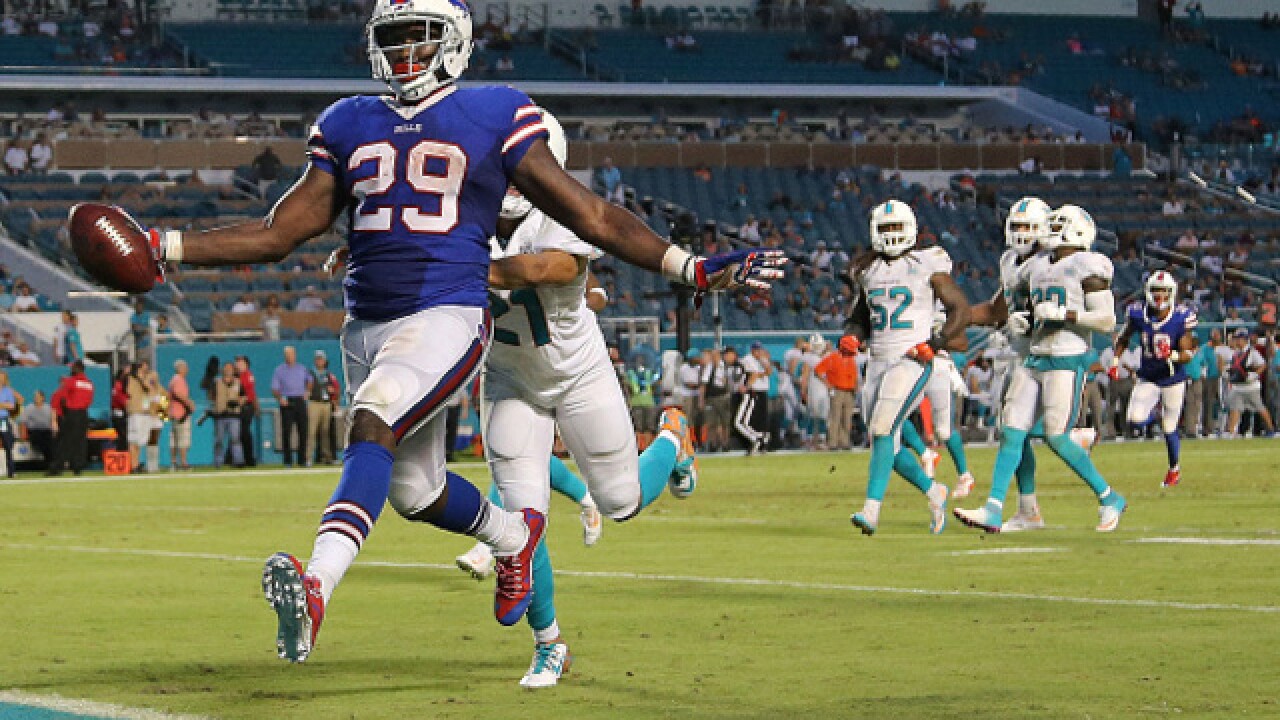 For the first time since the 2011 regular season, the Buffalo Bills will attempt to start the year with a 3-1 record. The Bills will have their third game in four weeks in the comfy confines of Ralph Wilson Stadium, and have as good of an opportunity as any to have a big start to the 2015 season.

In come the rarely seen, at least to the Bills, New York Giants to try and thwart the home team’s effort. What are some of the key things to keep an eye on in Sunday’s game?

Five things to watch when the Bills take on the Giants:

1) No Shady? No problem… for now
- The Buffalo Bills are taking the smart approach to let the prize of their 2015 offseason rest his injured hamstring, especially given the upcoming stretch of games. McCoy admitted that following the loss to the New England Patriots, a game in which it looked like he turned the corner from his hamstring injury, he suffered a setback in the week of practice leading up to their next game. As a result, we saw McCoy be severely limited in his effectiveness against the Dolphins, and the clock on his injury was quite frankly restarted. Now, with the emergence of Karlos Williams over the first three weeks of the season, the Bills feel comfortable enough with resting McCoy for this game, or however long it takes for his hamstring to get to 100-percent. Williams has been explosive, decisive, and has yet to be stopped by an opposing defense. As long as that continues, just let McCoy rest until he’s fully ready. An 85-percent McCoy won’t do you any good considering the type of runner that he is. Until Williams faces some adversity, they shouldn’t feel any pressure to rush McCoy back to the lineup.

2) The matchup nightmare that is OBJ
- The Buffalo Bills have the task of trying to limit one of the most explosive wide receivers in the league: Odell Beckham, Jr.. The Bills have had success for the most part against an opponent’s passing attack, you know, except for that future Hall of Fame quarterback Tom Brady. This week, the Bills will have to slow up the duo of Beckham, Jr., and Eli Manning, a pair that have developed quite a bit of chemistry since the receiver got to full health a few weeks into the season. To this point, the Bills have stuck with the left-right cornerback game plan, and not having top corner Stephon Gilmore follow the opponent’s top target. Following a successful first month in the league, Ronald Darby will be tasked with covering up Beckham, Jr. at times. Even though he’s been tested and stood up to a lot of it, it’s likely that he’ll continue to be tested. Beckham, Jr. has an incredible blend of speed, explosiveness, physicality, the ability to change direction, and of course, everyone knows about his hands. This is undoubtedly the best receiver the Bills have gone up against in this young season, so how Rex Ryan game plans for him will be a very intriguing aspect to the matchup.

3) Giants D-Line banged up
- One of the reasons that the Bills should feel comfortable with resting McCoy this week is just how much the Giants are banged up along their front seven. The Giants will be without both defensive end Robert Ayers, and defensive tackle Markus Kuhn, two normal starters along their defensive line. That shifts around quite a bit on their line, and puts either George Selvie — who struggles against the run — or the rookie Owa Odighizuwa on the field. On top of that, the Giants linebackers haven’t been the picture of consistency. Some will look at the rushing stats against them and see that they’ve allowed many more yards through the air in the first three games, but the Giants have held a double-digit lead in the fourth quarter in all of their games. The physical, north-south style of runner of Williams should fit quite nicely against the Giants front seven.

4) Who covers Clay?
- Speaking of the Giants linebackers, either one of them have to check Bills tight end Charles Clay, or it will fall on to the shoulders of one of the two starting safeties. Either way, none of them have the type of coverage ability to stick with Clay on a consistent basis. Clay made his presence felt in a big way, really for the first time of the season, against the Miami Dolphins last week. It’s been a long time since the Bills had a tight end that posed matchup problems, and now they have one in Clay. For the Bills on offense, with the type of talented cornerbacks that the Giants have in Prince Amukamara and Dominique Rodgers-Cromartie, they could really get their passing offense going through Clay.

5) Looming game day decision for NYG
- The Giants were without starting left tackle Ereck Flowers last week against the Washington Redskins, and although Justin Pugh held up well in his place, the insertion of John Jerry into the lineup at left guard provided an outright liability for their opponents. Along the defensive line, the Redskins aren’t anywhere near as talented as what the Bills trot out on a weekly basis. If Flowers, who is questionable, cannot play in the game, it will provide a huge advantage for Marcell Dareus and Kyle Williams on the inside. And even though Pugh held up well at left tackle, it will be a whole different story against Jerry Hughes, who has been bordering on the level of dominant in the first three games of the season. If Flowers is out, the Bills will have a huge opportunity to make Eli Manning’s job significantly tougher.

Prediction: Bills over Giants
- When the Bills go up against the New York Giants Sunday, they’ll be matched up with a team that lacks talent at a lot of places on defense. Tyrod Taylor and Karlos Williams shouldn’t have much trouble establishing an offensive flow against the Giants, which will in turn set the table nicely for the defense. And while the defensive line will have a bit of a better opponent this weekend in New York’s offensive line than they did last week in Miami, they still have a significant enough advantage with all four starters to get to Eli Manning. Point blank, the Bills have the far more talented roster — even without McCoy and Watkins, and should win this game.