Joe B: 5 things to watch in Bills - Dolphins 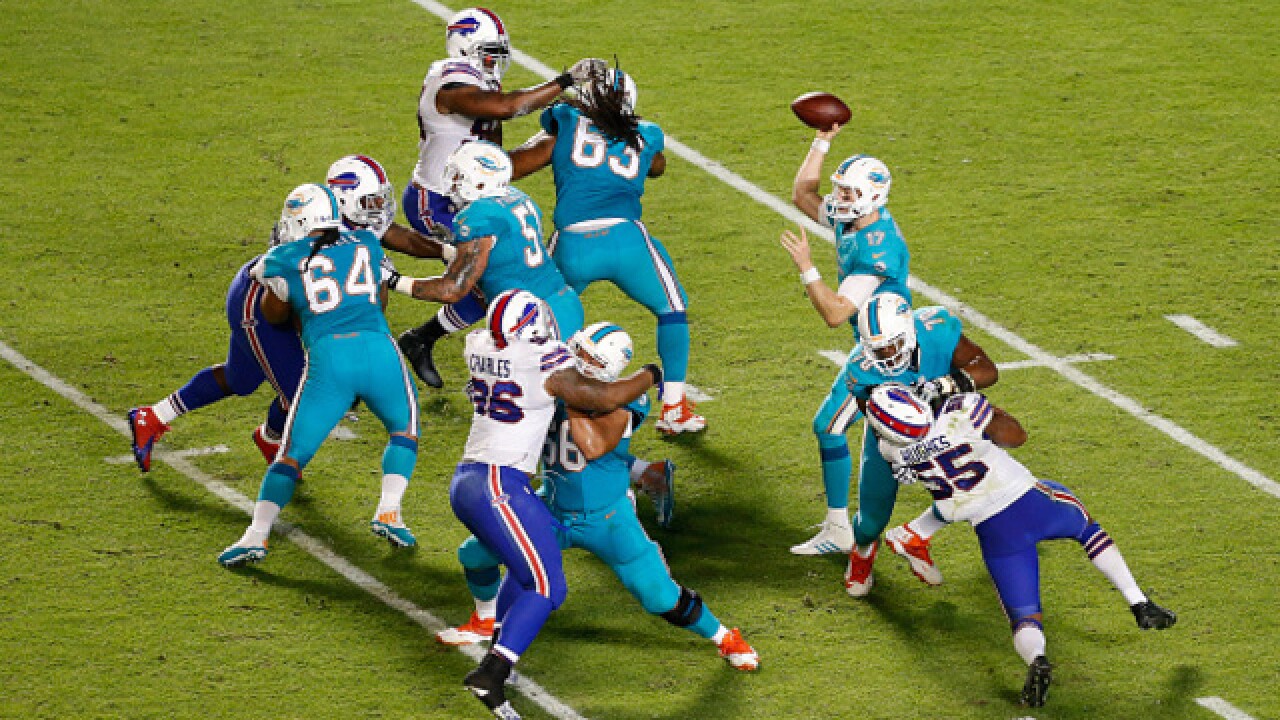 Joel Auerbach
<p>MIAMI GARDENS, FL - NOVEMBER 13: Quarterback Ryan Tannehill #17 of the Miami Dolphins throws against the Buffalo Bills in the third quarter in a game at Sun Life Stadium on November 13, 2014 in Miami Gardens, Florida. (Photo by Joel Auerbach/Getty Images)</p>

For the first time in 2015, the Buffalo Bills will hit the road and attempt to come away with a victory somewhere that isn’t Ralph Wilson Stadium. The Bills are up against a second straight AFC East opponent, in what could end up being a crucial contest if the team has playoff aspirations.

What are the biggest things to look for in the upcoming contest? Five things to watch as the Bills take on the Miami Dolphins at SunLife Stadium:

1) Taylor’s first adversity
- One game into his Buffalo Bills career, quarterback Tyrod Taylor had a sterling debut and didn’t show much weakness. What he did show, however, was that the offense was mostly set up through short passes with an occasional throw deep. Bill Belichick and the New England Patriots saw that, stacked the box with defenders, and dared Taylor to beat them deep. He couldn’t do it consistently, struggled to move the ball when it was still close, and the Bills fell way behind. Now, the blueprint to shut Taylor down in the passing game is there and he and the offense will have to prove that it was only a one week aberration. Taylor needs to see the field a little better, and be willing to take some chances with tight window throws. If he doesn’t, it could be as equally a difficult time for the passing attack as it was early on against New England.

2) Hughes should dominate
- The biggest development for the upcoming game wasn’t anything that the Bills did, but what happened in the first half of the Dolphins’ matchup with Jacksonville in Week Two. Miami went into the game with Branden Albert as their left tackle, who is one of the better players at his position in the league. Then, he injured his hamstring, tried to play through the injury, but just wasn’t the same and had to be replaced by Jason Fox. Now, Albert is doubtful for the game, and not expected to play by some reporters that don’t cover the team. The drop-off from Albert to Fox is a big one, and considering who the Bills will be putting Fox up against, the Bills very well could make Ryan Tannehill’s life miserable much like they’ve done for the past two years. Jerry Hughes draws the matchup, and it’s not as though the Bills can give a huge amount of help to Fox. As long as the Bills can thwart the quick-strike passing attack that plagued them last week, it would be a major disappointment if Hughes didn’t get the better of Fox consistently.

3) Who defends Jarvis Landry?
- The Miami Dolphins shipped Mike Wallace out the door this offseason, which paved the way for second-year receiver Jarvis Landry to become Ryan Tannehill’s favorite target, and one that has gotten the highest volume of passes thrown his way through the first two weeks. Landry isn’t just any type of receiver: he operates primarily in the slot, and isn’t built like a normal player for that position. Landry is strong, runs great routes, and shows a fantastic ability to bring in the ball. Since he is the go-to guy, who will the Bills put on him? Through the first two weeks, the Bills haven’t really done any special matchups for their opponents wide receivers, mostly playing a left-right system with their starting cornerbacks Stephon Gilmore and Ronald Darby. Since Landry is primarily in the slot, the general thought would be that the small, yet explosive Nickell Robey would be the man that draws the assignment for the majority of the game. However, if the Bills associate Landry as the key to shutting down the Dolphins passing attack, perhaps they’ll key Stephon Gilmore on him through the game. Either way, keeping Landry off the stat sheet in a big way will be a key to coming away from Miami with a victory.

4) Interior advantage for both teams
- Both the Bills and Dolphins boast a very good starting defensive line, and now with recent additions to Miami’s front, the identity of both units start with the defensive tackles. For Miami, Ndamukong Suh and Earl Mitchell pose many problems to opposing offensive lines. Suh has had a bit of a slow start to his season, but can certainly blow a game wide open with how talented he is. He’s actually been outplayed by Mitchell through two games. With either player, rookie right guard John Miller will have his hands full. For the Bills, there’s nowhere to hide for Ryan Tannehill. Even if they had Branden Albert playing in this game, Marcell Dareus and Kyle Williams would still have matchups against two below average starters at guard. Rookie Jamil Douglas has been beaten at times through the first two weeks, but the real weakness is with left guard Dallas Thomas. With how much Thomas has struggled, it’s likely that he’ll end up getting help from center Mike Pouncey, but that still leaves one of the two stud defensive tackles against a fourth-round rookie. The defensive line should be motivated by last week’s result, and due to the matchup ahead, they should dominate.

5) Can Dolphins take advantage of Rambo?
- When watching some of the All-22 on the Dolphins, it’s hard to ignore the progress that Ryan Tannehill has made over the years. Early on in his career, he would just take the easy throw and was much more of the game manager type than what teams hope for in their quarterback. Now, Tannehill makes tight window throws on a routine basis, and that has certainly put the Dolphins in the equation for a potential playoff berth this season. Without Aaron Williams in the lineup, the Bills will go with Bacarri Rambo as the starter opposite Corey Graham, and that should make them a bit nervous if Tannehill has some time. Rambo isn’t incredibly instinctive in coverage, and has shown he’ll get flat-footed from time to time. It’s all a moot point if Tannehill can’t get the ball out of his hand, but Rambo is a legitimate weakness that the Dolphins may opt to exploit with tight end Jordan Cameron, or whoever else they line up to get picked up by Rambo.

Prediction: Bills over Dolphins
- The Bills and Dolphins are two very talented teams that are similarly built. When thinking about the game through the week, it really is easy to work yourself into thinking both teams could win. However, with the most recent development for the Dolphins and starting left tackle Branden Albert likely being out for the game, the pendulum swings completely in favor of the Bills. As long as the Dolphins start Jason Fox at left tackle, along with left guard Dallas Thomas, they’ll have two players next to one another that are complete liabilities against one of the most talented defensive fronts in the NFL. For that reason, a low-scoring, grind it out victory seems the likeliest outcome for the Bills.