Joe B: 5 things to watch in Bills - Colts 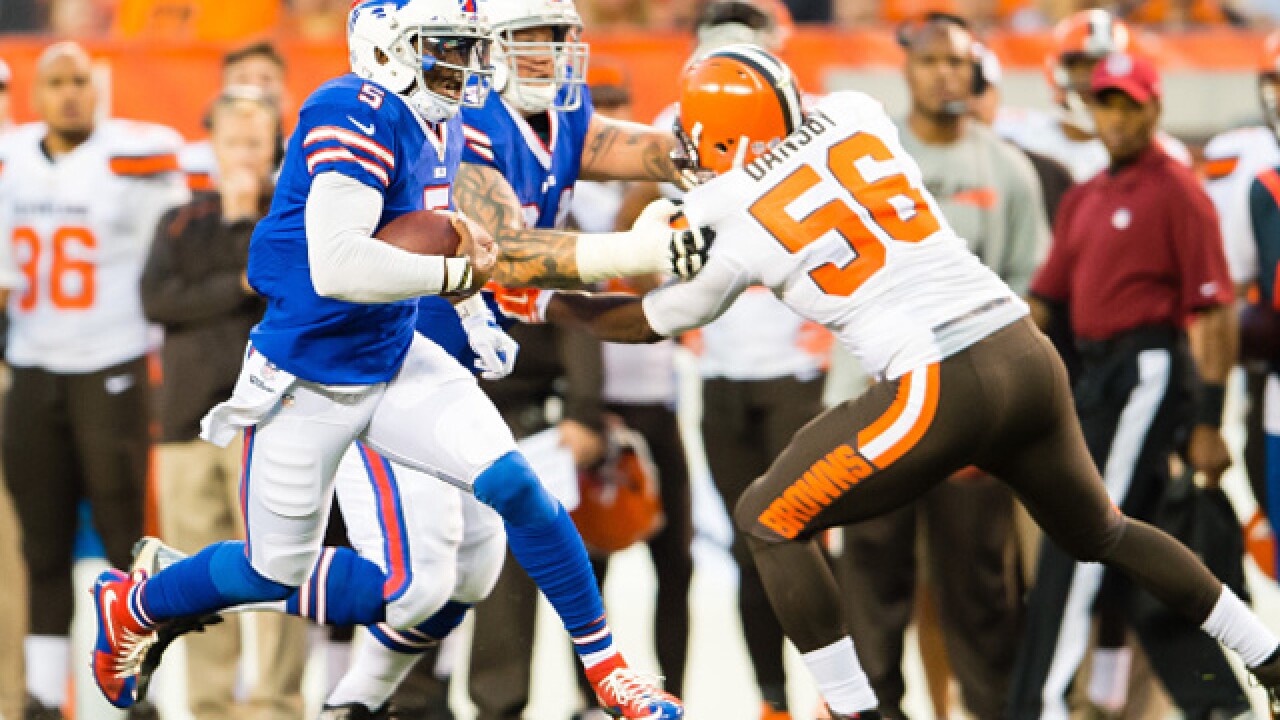 Jason Miller
<p>CLEVELAND, OH - AUGUST 20: Quarterback Tyrod Taylor #5 of the Buffalo Bills scrambles for a gain during the first half of a preseason game against the Cleveland Browns at FirstEnergy Stadium on August 20, 2015 in Cleveland, Ohio. (Photo by Jason Miller/Getty Images)</p>

The wait is finally over. After a long offseason that saw as many changes as a franchise could see, the Buffalo Bills will at long last kick off the regular season against the Indianapolis Colts on Sunday.

The Bills often get a huge outpouring of support from their adoring fans in the home opener, but the crowd at Ralph Wilson Stadium promises to be one of the loudest we’ve seen in some time. Will the Bills send them home happy, with all the expectations heading into the 2015 season?

Five things to watch that could shape the outcome of the game:

1) Tyrod’s debut
- Rather than going the safe route, the Bills are going with the boom-bust way of life by electing to have Tyrod Taylor be the starter heading into the season. Everything that the Bills have done in the offseason has been with a “go for it” mentality, and the decision to start Taylor is no different. The beauty of Taylor starting is that the Colts won’t know how to prepare for him. It would be fair to expect short, high percentage throws that are balanced out through the rest of the game with some read-option to keep the defense honest. The game plan, with offensive coordinator Greg Roman at the helm, will likely be a creative one that puts the Bills in position to win the game. The real test is if Taylor can do the same kind of things he did in the preseason against an opponent that isn’t playing a vanilla defense. All the potential is there to make it a fun afternoon at Ralph Wilson Stadium with Taylor at the helm, he just needs to take advantage of the opportunity against an average to below average Colts defense.

2) How much can Shady give?
- When he’s 100-percent healthy, the Bills will run their offense through LeSean McCoy. He was the prize of the offseason, and the Bills are planning to use him accordingly. The trouble is, McCoy admittedly won’t be at 100-percent health when the Bills take on the Colts Sunday. He injured his hamstring on the second of two joint practices with the Cleveland Browns this summer, and hasn’t participated in a game since. As important as the rushing attack will be to the Bills, can McCoy give them a full game? With how tricky hamstrings are to rehab from, it would be smart to not put a full load on him just yet. Rookie Karlos Williams hasn’t been on the injury report at all this week, but also hasn’t participated in a game since his hospitalization. Either Williams or Bryce Brown will have to step up when McCoy needs a few plays or a series off.

3) Daunting task for Darby
- The cornerback position in Rex Ryan’s defense is one of the most high-pressure spots in his system. They are often left alone, in man-to-man coverage, for quite a long time if the defensive pressure doesn’t get to the quarterback in time. With rookie Ronald Darby struggling the way that he has been through the preseason, the pressure of the position, combined with one of the best quarterbacks in the game fronting the best passing attack in 2014, could be grounds for an outright liability. The Bills have a few options for the upcoming game: they could assign him to the veteran Andre Johnson, the could put him on the Colts’ top wideout in T.Y. Hilton and give him help over the top, or, they could just play left-right and assign Darby to a side and give him help when appropriate. Of the three options, the one that assigns him to only Andre Johnson sounds the most desirable. While Johnson has been giving opposing cornerbacks nightmares for years and still has the ball skills and height that gives teams trouble, he is not the same player as he once was. At 34 years old, Johnson has lost a step, and the fresh-legged Darby should have a better chance for success against him than against the lightning in a bottle Hilton. Regardless, Darby will have his hands full, and has to improve quite a bit from his performances through the preseason.

4) No Dareus? No problem — for this week
- The Buffalo Bills boast one of the best defensive lines in the entire National Football League, so it’s no surprise that the unit is expected to dominate an opponent up from. However, they are losing arguably their most talented player for the week in Marcell Dareus, but the good thing for the Bills is this: it probably won’t matter much. Up front, the Indianapolis Colts are an unimpressive group and the Bills shouldn’t have many problems. Despite what he says to reporters, Jerry Hughes will be especially motivated against the team that gave up on him, and both Kyle Williams and Mario Williams should be able to win their matchups consistently. When the Colts do run the ball, the defensive line will set the table for Nigel Bradham and Preston Brown to bring the hard-running Frank Gore down to the turf. If the Bills can make the Colts one-dimensional, it could be a huge step towards securing a victory in a tough opening game.

5) The game breaker: T.Y. Hilton
- Regardless of who is covering him, T.Y. Hilton is an incredibly impressive wide receiver that can win a matchup. The Bills will truly have their hands full with the explosive wideout, who not only matched his 2013 output of 82 receptions in 2014, but improved his yards per catch by over three yards. In 2014, Hilton averaged 16.4 yards per catch, and has become Andrew Luck’s go to player. As a whole, the Colts are incredibly dependent on both Luck and Hilton to keep them afloat. Even Stephon Gilmore, the Bills top cornerback, will have his trouble against Hilton. It will rest solely on the pressure of the defense against Luck to stop the combination of him and Hilton, rather than that of the secondary. If they can’t get to Luck, it could be a long day. Fortunately for the Bills, they boast a very impressive front-seven defensively.

Prediction: Bills over Colts
- If you look at it from a very basic approach, you see Andrew Luck against Tyrod Taylor in his first start, and the initial impulse is to go with the Colts. However, there is so, so much more to it than that. It’s the Bills overwhelming talent on the defensive front, it’s the supporting cast around Taylor against a sub-par defensive front. And, the home factor in Rex Ryan’s first game as the Bills coach cannot be ignored, either. The Bills have enough talent up front defensively, and a unique game plan for Taylor to start the season off with a victory, and despite Luck being one of the best quarterbacks in the game, the Bills have everything in their arsenal to get the job done.