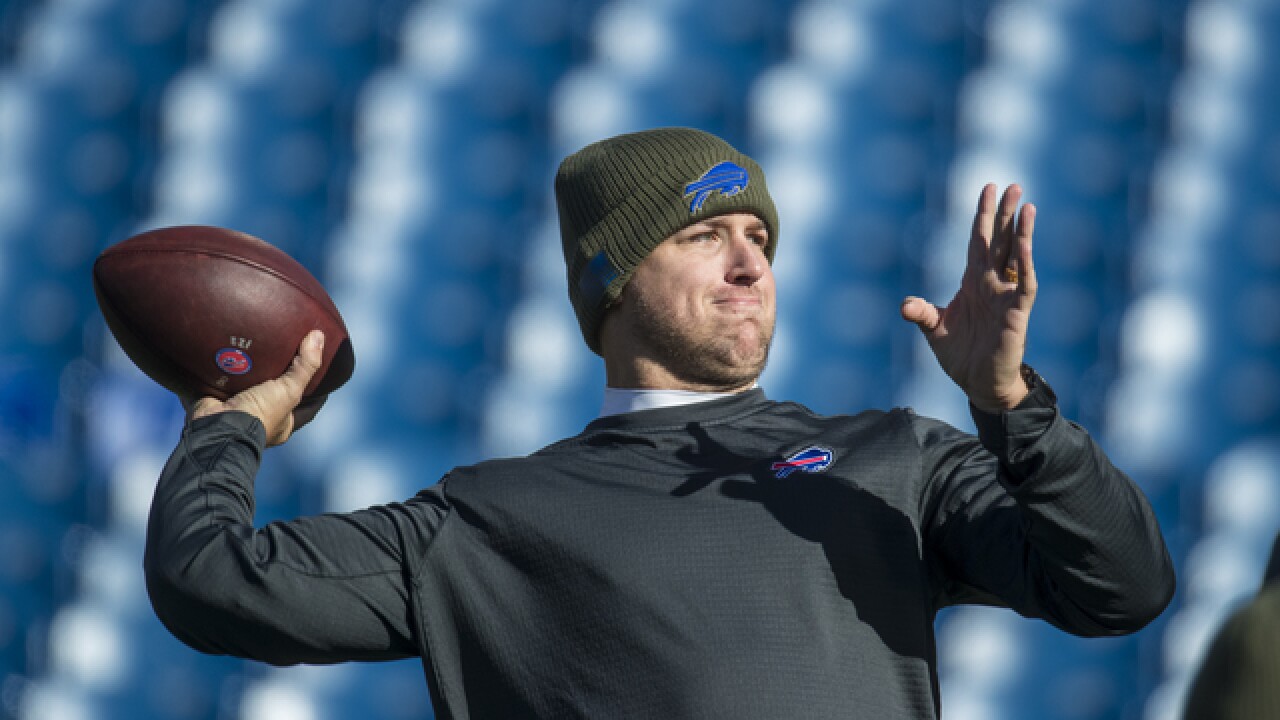 Copyright 2018 Scripps Media, Inc. All rights reserved. This material may not be published, broadcast, rewritten, or redistributed.
Brett Carlsen
<p>ORCHARD PARK, NY - NOVEMBER 04: Matt Barkley #5 of the Buffalo Bills warms up before the game against the Chicago Bears at New Era Field on November 4, 2018 in Orchard Park, New York. (Photo by Brett Carlsen/Getty Images)</p>

Heading into the weekend, it was merely a possibility. Now with a stark announcement on Saturday, it’s an outright certainty.

For the second straight week, the Bills will be without their top two quarterbacks in Josh Allen and Derek Anderson. But, it won't be Nathan Peterman taking the first few snaps for the Bills at quarterback on the road against the New York Jets on Sunday.

Oh, my, what a world we’re all living in with the Bills offense in 2018. Five things I’ll be keeping an eye on in the game between the Bills and Jets — two teams that have combined for seven straight losses:

1) Matt Barkley is actually starting
- It was late Saturday afternoon. There I was, sitting on my delayed flight to Newark at the gate in Buffalo, writing this very preview that you’re reading today. I made it to about three sentences on if it’s wise to play Josh Allen so soon, only to look down at my phone and see big news for more reasons than one. Matt Barkley, the 2013 fourth-round selection and journeyman backup quarterback — the one that admitted to reporters after his first practice with the team last week that he hadn’t received a call from any other team through the first half of the season before the Bills — is going to start on Sunday after all of six practices. Barkley will be the fourth different starting quarterback of the last five games, and since the 1970 NFL merger, this will only be the second time the Bills have used four different starters at the quarterback position in one season. That fateful year? The 1987 NFL season that was marred by a strike and rife with replacement players no matter where you looked. Now, what can Bills fans expect from a quarterback that they signed on Halloween for what they hoped to be just a one-week rental as the backup to Nathan Peterman? Well, not much. The offense will probably be watered down considerably. But hey, the good news is that the Bills just went through this a few weeks ago so at least they’re a bit acclimated to operating with a smaller playbook. Just as was the case with Derek Anderson and Nathan Peterman, Barkley is known a bit for his turnovers. While they likely won’t be as frequent as they were for Peterman, the prospects of the offense getting out of their prolonged slump might have to wait until the Bills get back home after the bye week against the Jacksonville Jaguars on November 25. Back in August, while watching Matt Barkley toss the ball around for the Bengals as their backup against the Bills in the preseason, I’d be lying if I told you I’d go on to write this paragraph featuring him as the starter for the Bills. Though, with the way things have gone offensively for the Bills in 2018, nothing seems quite as fitting as the fate that is about to unfold at MetLife Stadium.

2) What’s next for Nathan Peterman?
- With the decision to bench Nathan Peterman now for the third time by this coaching staff, it certainly seems like a bit of finality could be on the way between the two parties. Even in extended opportunities, Peterman is a turnover magnet that can’t push the ball down the field well enough without a distinct fear of a turnover on the same play. It’s no wonder why that head coach Sean McDermott spoke in curious terms twice this week. On Monday, McDermott was asked if Peterman would be the starter if both Josh Allen and Derek Anderson couldn’t play, to which he agreed — but with a peculiar caveat at the end. “At this point in time.” That sent the flares up right from the start of the week. Then, on Friday, when asked to confirm that it would be Peterman playing in that same scenario, McDermott was non-committal. He wanted to focus on Josh Allen and his availability rather than discuss any of the other options. That screamed that something was amiss, and now it’s confirmed, with Peterman getting benched once again. This game is now the second time in under one month that the team benched Peterman in favor of a quarterback that had all of six practices with the Bills to his name. The signs are ominous at best for Peterman and his stay on the active roster. As long as either Josh Allen or Derek Anderson is healthy enough for that November 25 game, logic indicates that the team will release Peterman. Even before the Bears loss, I thought there was a strong chance that they could bring him back to the practice squad once he clears waivers. But now with another strike against the young quarterback and the perception that follows him, it might just be best for all parties to move on for good.

3. Edmunds’ return is humongous for the Bills
- At this point, there are no false illusions from the fan base. If the Bills are going to churn out a victory in a game that has Matt Barkley starting at quarterback, the defense will not only have to set the table. They’ll have to provide the food and maybe even eat the whole damn dinner by themselves. Turnovers and scores from the defense will be the only path for the Bills in this game, which is why getting rookie middle linebacker Tremaine Edmunds back into the lineup is a big development. Backup Julian Stanford put together a solid effort in place of Edmunds, but there is no replacing an impact that a 6-foot-5 freak athlete of a middle linebacker has on a quarterback trying to attack a zone defense over the middle of the field. With his length, all he needs is to get a hand — or even a finger — on a pass to completely change its trajectory and to give the Bills a chance to force a turnover. The usually safe throwing Josh McCown might have to opt for other options due to the mere presence of Edmunds, which completely plays into the Bills’ hands to get the Jets offense off of the field.

4) The land of opportunity begins at OL
- With a full month of losing at the line of scrimmage and not establishing the ground game whatsoever, the Bills finally have had enough. Likely for the first time since Week Three, the Bills will bench one of their starting five in favor of a reserve option. Last time it was center Russell Bodine for Ryan Groy, and this time, left guard Vladimir Ducasse appears to have been benched in favor of rookie and fifth-round pick Wyatt Teller. It’s about that time of the season for the Bills, where the result of the game is mostly meaningless to their development as a winner, with the heightened focus being on seeing if any of the young players on the roster can play a role in their future. Teller showed well on a few plays in his first NFL action last week against Chicago. Now, unless the Bills have a complete change of heart, Teller will be making his first start ever. I don’t necessarily believe that left guard will be the only position to receive some new blood during the game. I would expect Jordan Mills to take some snaps on the sidelines like he did last week for some series, though whether it’s for Jeremiah Sirles or the young Conor McDermott is still unclear. As the season continues to get closer to the end, expect to see plenty more of these decisions that focus almost entirely on the development of the youth of the roster.

5) Ryan Lewis will start, but maybe some Levi Wallace, too?
- And speaking of that same phenomenon, we’re going to see the same thing at starting cornerback on Sunday. After two big-yardage pass interference penalties against the Bears, that was enough for the Bills to move on from veteran cornerback Phillip Gaines. In place of Gaines will be Ryan Lewis, who is slightly more erratic in his movements but has been a better performer over Gaines in a small number of games this season. Lewis showed some potential and flashed the closing speed that helps keep him in such a positive light. Though, given the Bills wanting to try some new things, I do wonder if the Bills might get a series or two over to undrafted rookie cornerback Levi Wallace. Way back in the spring, Wallace flashed some ability but struggled to make his mark once the team started the physical practices of training camp. Much in the same way that the decision to put Teller in at left guard, it would be wise to get Wallace some snaps to see how he’ll respond. It might not be this week, but the Bills owe it to themselves to see if Wallace can play — just like Lewis, mind you.

Prediction: Jets over Bills
- I’ll keep this short and sweet. Even though the Bills defense has continued to play extremely well for the majority of the season, it all comes down to the obvious. I cannot, in good faith, predict an already hapless Bills offense turns it around and helps them to a victory with a quarterback that is known for turnovers and has practiced only six times with the Bills. The bye week can’t come soon enough for the Bills and their fans, with the hope that Josh Allen is waiting at the other side of the rainbow ready to return for the last six games of 2018.