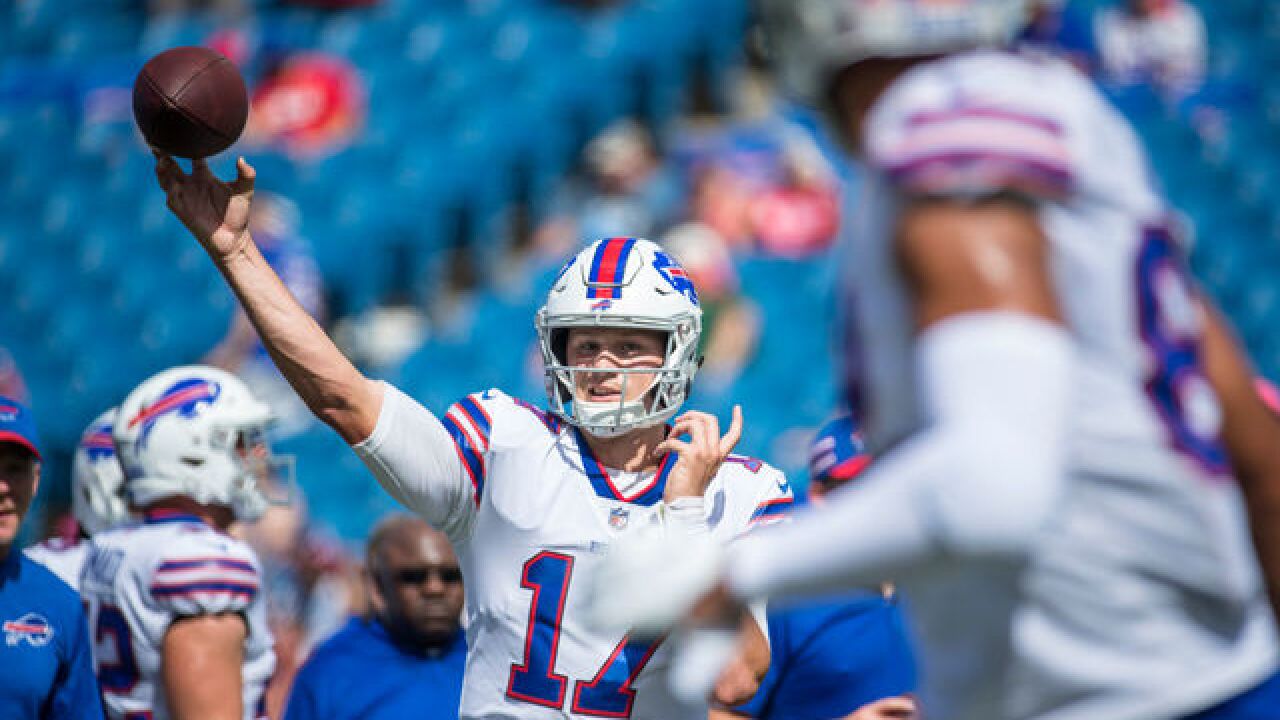 Copyright 2018 Scripps Media, Inc. All rights reserved. This material may not be published, broadcast, rewritten, or redistributed.
Brett Carlsen
<p>ORCHARD PARK, NY - SEPTEMBER 16: Josh Allen #17 of the Buffalo Bills passes the ball during warm ups before the game against the Los Angeles Chargers at New Era Field on September 16, 2018 in Orchard Park, New York. (Photo by Brett Carlsen/Getty Images)</p>

The Buffalo Bills are now two weeks into the 2018 regular season, and the majority of their time on the field has gone the same way. In the first half of both of their contests, the Bills were outclassed by their opponents which led to a lopsided score at halftime, and then a defeat once the game was over.

Their first two weeks were considered the smooth portion of their schedule in September, and now that they have dropped both of those games, the next two games could provide a 0-4 start to the campaign. However, it all starts with the Bills taking a trip to go up against the Minnesota Vikings on the road.

How do the Bills stack up with the Vikings? Five things to watch for:

1) Where Josh Allen can improve from his first start
- The Bills knew what they were doing when they decided to name rookie Josh Allen the starting quarterback, knowing full well that the first two games on the schedule for him featured a pair of top defenses in the NFL. As good as you think the Chargers might have been in Week Two on defense, the Vikings are far superior almost all over the field. They have as close to a complete defense as you’ll find in the NFL right now. However, this is also an opportunity for Allen to provide more of a baseline for both he and the Bills to work from and figure out what to do as they go forward. After going back and watching the coaches film, I noticed some tendencies of Allen's in his first NFL start that the Bills will want to get back under control. After showing some progress in his footwork and lower-half mechanics specifically on throws to the left sideline, Allen displayed that pesky tendency to open up his left hip when throwing it to that area, and it cause both velocity and accuracy to go on him. Now, it didn't happen on every throw to the left, which is likely a product of all the work both Allen and the Bills put into that. However, it has to be something that the Bills continue to drill Allen on both before and after their practice days to make sure that doesn't creep back into the equation. For this second thing, it would be asking far too much to have Allen get it immediately and begin doing it starting this week all the time. However, his recognition of where plays are opening up aren't always taken advantage of, and opportunities for big plays get wasted. The one play that stands out like a sore thumb was on his deep pass to Zay Jones. Now, that was a completed pass after Jones made a great adjustment on the underthrown pass to bring in the big gain. However, had Allen trusted what he saw, he would have successfully found Jones wide open down the left sideline with a lot of room to run. So, if Allen can focus on the lower-half mechanics throwing to the left and his recognition ability and show *some* improvement this week, those are tangible results that can signal that he's making progress. However, this Vikings team isn't going to make it easy on him -- especially not with their secondary.

2) A switch at center on the horizon?
- It seems as though Allen might have a switch on the offensive line directly in front of him on Sunday. After two games where he struggled significantly, signs at practice through the week lead me to believe that the Bills benched Ryan Groy. When reporters were escorted away from Wednesday's practice after the media portion had wrapped up, it was Bodine heading to the huddle with the first-team offense, and Groy trotted to the sidelines. Additionally, Bodine was next to Groy with the first-team offense during individual drills -- perhaps to throw off the scent, though both players had the regular guards and tackles directly next to them. That was the first time since the season started that both centers were working with the first-team during those drills. Through the summer, Groy won the competition to be the starting center over Russell Bodine, but the two seemed to be reasonably close in performance for much of the preseason. With the rest of the offensive line appearing to have shaken off the Baltimore game enough to have a solid game against the L.A. Chargers, the center position became the lone glaring weakness in the Week Two loss. If there is one thing that head coach Sean McDermott values -- especially if there is a position that seems to be struggling as Groy is at center -- he believes firmly in starting experience. Bodine, in his four years in Cincinnati, started all four seasons he was with the Bengals. He wasn't a fan favorite during his time in Cincinnati, which means it probably won't be a humongous upgrade from one player to the other for the Bills. However, McDermott could believe there's a chance for more consistency from that position, and if he gets that, perhaps they can unlock their running game. However, it's a big ask because Bodine hasn't been the best performing center in his time in the NFL, so fans might have to deal with that position being a weakness in 2018.

3) Xavier Rhodes is a complete mismatch for Kelvin Benjamin
- In the Josh Allen section, I mentioned how much talent the Vikings have on the defensive side of the ball. However, it's debatable, but their most talented player might be cornerback Xavier Rhodes -- and that's saying something considering linebacker Anthony Barr and safety Harrison Smith both play for Minnesota as well. Rhodes is a treat to watch because of his size, how fluidly he moves around on the field, and how he can make any distance from the receiver evaporate in the snap of a finger. Rhodes will likely draw Bills wide receiver Kelvin Benjamin for the majority of the game, and I expect Benjamin to have a quiet day. For a receiver that struggles with separation as it is, going against the tall, physical, and long-limbed Rhodes is a matchup that could erase him close to completion. I do think Allen will try getting the ball to Benjamin regardless, which could lead to a potential game-changing play for the Vikings. In that matchup, if the Bills target Benjamin, I think there is a strong chance that Rhodes can come close to picking off a pass a time or two -- if not completing the play outright. The best bet for Allen would be to go after the slot and the other starter Trae Waynes, but even that isn't the most welcoming idea. Allen might fight some early trouble against this Vikings secondary.

4) Who lines up at cornerback?
- The Bills have quite the afternoon ahead of them in trying to figure out the cornerback equation. Tre'Davious White is locked in as the top cornerback -- and I wouldn't be surprised to see him following around Stefon Diggs on Sunday when the Bills are lined up in man coverage. However, after White, everything is in flux. Phillip Gaines has a fractured elbow and has a brace that holds the joint in place that extends from his mid-forearm up to his bicep -- and he might play out of necessity. Gaines is the regular starting boundary corner, though his injury status will have both the recently called-up Ryan Lewis, and the usual special teams contributor Lafayette Pitts on call to go in at a second's notice. Rookie nickel Taron Johnson is coming back from a shoulder injury and is listed as questionable, but considering how often he was with the first-team secondary during practice, I expect that he'll suit up. There's always a chance for re-injury, and I wouldn't even rule out us seeing all five cornerbacks at one point or another on Sunday. That isn't exactly ideal, considering they'll have to figure out what the heck to do with Adam Thielen every play that they're in man coverage. The Diggs-Thielen combination against this banged up Bills secondary has explosive potential from a passing stats perspective -- especially since Minnesota will be without Dalvin Cook.

5) The two key players for the Bills having a chance on Sunday
- For the Bills, there aren't many areas where they have an advantage over the Vikings, but the two they have to exploit to give themselves a chance are intertwined. If there is one weakness of the Vikings, it's along the offensive line -- and most notably at center and right tackle. Now, Minnesota drafted Pat Elflein to take over at center, but he has yet to play this season, with the utterly beatable Ben Jones filling in for him. Elflein is no longer on the injury report, though it remains unclear if they'll immediately insert him into the starting lineup. If Jones remains, the defensive tackle I believe the Bills need to play as much as necessary against him is Harrison Phillips. The rookie's combination of power and long arms has dominant potential from a Bills perspective, and he could create pressure from the interior for the Bills. At right tackle, the Vikings' Rashod Hill is not infallible -- and Trent Murphy's solid showing against the Chargers show he's got some of his pass rushing gravitas back. Hill is even dealing with a foot injury which could slow him down a tad. Now, Murphy and Phillips have to work in unison here. I firmly believe the best chance the Bills have to win this game would be if their pass rush can get to Kirk Cousins, and force him into bad throws and potential turnovers. If the Bills can work with multiple short fields, they have somewhat of a chance. If they don't generate the pressure, I think Cousins has all the potential to pick this bruised Bills secondary apart.

Prediction: Vikings over Bills
- Before I started watching the coaches film of the Vikings, I looked at the then 16.5-point line and thought the Bills might have the ability to best that figure. It was a whole different story after watching each player on the Vikings. Outside of center and right tackle, there isn't another obvious mismatch for the Bills to try and exploit. The Vikings are one of the most talented teams in the entire league and given their home-field advantage, the game could get away from the Bills in a hurry. For Bills fans, if the pass rush can provide a spark and Allen shows some signs of life against one of the toughest defenses he'll see in 2018, that in itself could be considered a win -- even without there being a real win to speak of for the Bills. In the end, I've got the Vikings winning this game comfortably, with their passing game being the star of the show.