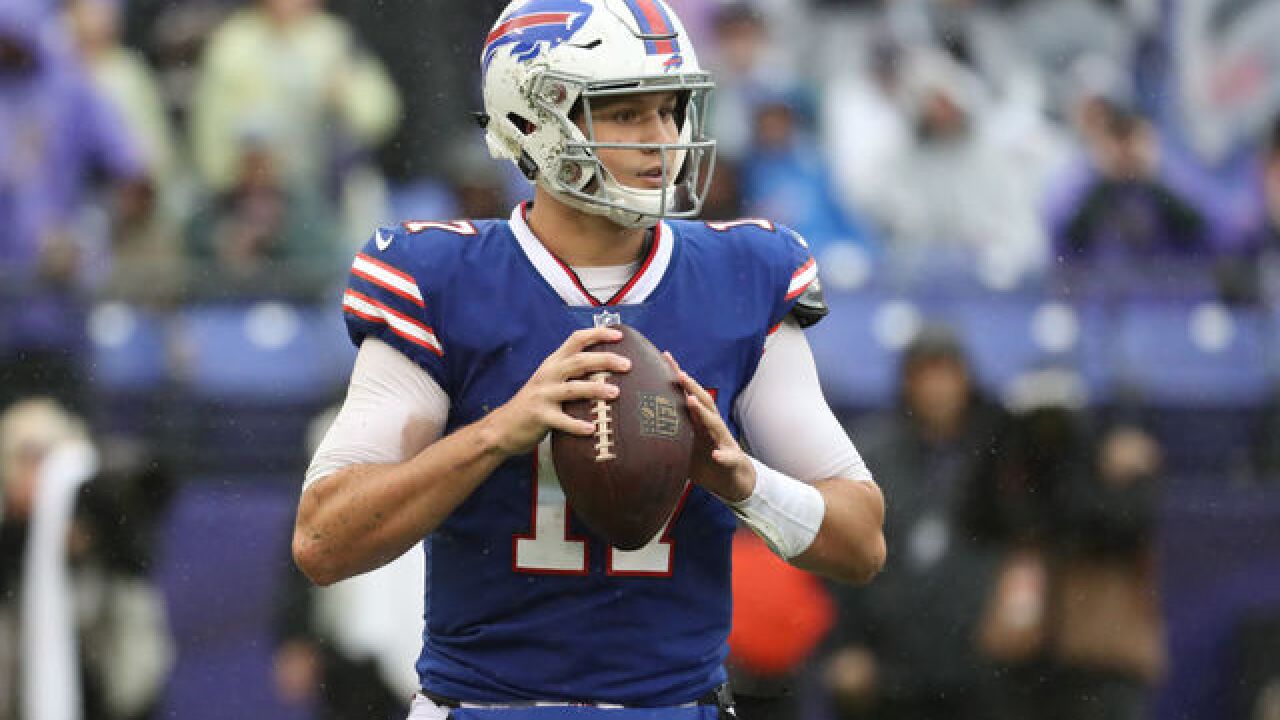 Copyright 2018 Scripps Media, Inc. All rights reserved. This material may not be published, broadcast, rewritten, or redistributed.
Rob Carr
<p>BALTIMORE, MD - SEPTEMBER 9: Josh Allen #17 of the Buffalo Bills looks to throw the ball in the fourth quarter against the Baltimore Ravens at M&T Bank Stadium on September 9, 2018 in Baltimore, Maryland. (Photo by Rob Carr/Getty Images)</p>

After a lackluster debut to the 2018 regular season, the Buffalo Bills will return to the field on Sunday for their first home game -- and a pretty significant one at that. When the Bills line up against the Los Angeles Chargers, it will be the first start for the rookie quarterback and seventh-overall selection Josh Allen.

Now with the 47-3 debacle in Baltimore in their past, what might we see in the Bills' upcoming matchup with the Chargers?

Five things to watch for:

1) Josh Allen's debut
- Well, that didn't take long, did it? After just one week, the Bills have decided to begin Josh Allen's reign as the starting quarterback of the team far earlier than many had anticipated in the 2018 season. The pros and cons of starting him this early have spurred on a fair share of debates, but all those points are now moot. All that matters is the Bills have their quarterback of the future now as the quarterback of the present. What can we expect from Allen, and what would make Sunday a success? Considering the success the Kansas City Chiefs had through the air against the Los Angeles Chargers, this might not be your average run-based offensive attack for a rookie quarterback. As for what would make Sunday a success -- outside of the obvious with the position and winning the game -- as long as we see him push the ball down the field and keep his lower body mechanics where they should be, those are both good signs for the future. Furthermore, if he shows improvement from last week in standing tall in the pocket, as opposed to taking off and running when there isn't any pressure yet, that will be a welcomed sight for the Bills. If Allen can help the offense look competent, it would be an overhaul from what we all witnessed in Baltimore. There will likely be some mistakes interlaced with the performance, but as long as he shows the flashes of brilliance along with it, Bills fans will probably be more than happy about his debut -- regardless if it's a win or a loss.

2) Kerley's gone, now what?
- Just one day ahead of the team's game against the Los Angeles Chargers, the Bills announced they had released wide receiver Jeremy Kerley -- a move that drew a lot of criticism on Twitter. However, given the fact that the Bills had referred to it being early in the second year of their roster, that was likely a nice way of saying they probably aren't going to be good this year. If that's their logic, it will make sense in their minds to vanquish a 29-year-old veteran from the roster to instead give those valuable snaps on offense to young players that could instead play a role into their future. Kerley had a significant role last week, getting 69-percent of the offensive snaps, and those will now go elsewhere. The top two of Kelvin Benjamin and Zay Jones remains unchanged, but now in three-wide receiver sets, I think this may free up Jones to work in the slot much more which is a bit of a comfort zone for him stemming from his college days. For this week, it probably means undrafted rookie receiver Robert Foster gets a heightened role as a speed threat to use on the outside if Jones moves to the slot. Should Ray-Ray McCloud be healthy enough to play, it could also open up a handful of snaps for him as the slot receiver, too. The Bills have to come away from 2018 with extended information on the trio of Jones, Foster, and McCloud, to see if any of them can be a part of their future at the position. While Kerley getting released represents a short-term loss, they're likely hoping the opportunities to their young will bring about a long-term gain.

3) Key to Bills pass rush vs. Chargers: attack the guards
- While it wasn't a complete dud of a game for a healthy amount of individuals along the defense for the Bills, what made the loss an abject failure for the whole defense was the pass rush. The Bills generated no pressure on Baltimore quarterback Joe Flacco, and it resulted in tons of time in the backfield to allow his receivers get open. The best pass rusher the Bills had on Sunday was Shaq Lawson, and he won't play against the Chargers because of a hamstring injury, which means that Jerry Hughes and Trent Murphy need to step it up this weekend. If they don't, Phillip Rivers will look to push the ball down the field all day long, and he still has the talent to tear them up. Luckily for the Bills, there are matchups to be had for them, particularly on the inside. The guard play for the Chargers in pass blocking appeared to be a weakness in Week One. Right guard Michael Schofield showed to be a slight liability, but the man to attack is left guard Dan Feeney. The second-year player had just a dreadful game in which he had trouble dealing with length and physicality. Keeping that in mind, if I were the Bills, I would have rookie defensive tackle Harrison Phillips line up over Feeney as much as possible. Phillips is the best interior rusher that they have on the roster and has the most juice in his legs at his position -- and not to mention he played reasonably well against Baltimore. If they can generate some heat from inside, that will infinitely help the edge rushers in winning their battles and making Rivers' day that much more difficult.

4) Cornerback shakeup?
- After just one game, the Bills already find themselves down one of their top three cornerbacks, and that will likely bring about a considerable change for Week Two. The Bills deemed rookie Taron Johnson as the top nickel cornerback on the roster, but a shoulder injury in Week One means he won't be able to play in the game. Without him, the Bills have a few different options, but the one that makes the most sense would be to make Vontae Davis active and ready to play against the Chargers. Now, Davis wouldn't be playing the nickel -- he's not cut out for that role. Instead, I think we'll see Week One starting right cornerback Phillip Gaines lined up at nickel corner when the opposing offense brings on a third wide receiver, which would mean Davis is the right cornerback. Then, when the Chargers offense goes back to a base look with only two wide receivers, I think Davis would likely come off the field and Gaines shifts back to the right cornerback spot like in Week One. The Bills cannot have safety Rafael Bush lined up at nickel corner against the Chargers with the possibility that he might be lined up over Keenan Allen. That's a nightmare waiting to happen if they choose to line Bush up there, which is why it's likely that we see Gaines flip inside for Week Two. One other thing to monitor is the Bills' usage of Tre'Davious White, and if he shadows Allen everywhere he goes. The talent and effectiveness of Allen in comparison to his receiver teammates lends itself to that line of thinking.

5) A good Dawkins gauge
- The offensive line was a bit of a mess for the Bills against the Ravens, most notably at center and right guard letting up a lot of pressure on the quarterbacks. However, second-year left tackle Dion Dawkins had a solid game against Terrell Suggs in a tough matchup, which leads you to believe that he's starting to settle in. For their Week Two matchup, he's got an incredible test ahead of him in the non-stop tornado of a defensive end: Melvin Ingram. If Dawkins isn't careful, Ingram can take over a game from that side of the line -- even without the presence of Joey Bosa on their defense. Should the Bills' left tackle come out of this game relatively unscathed, that's a huge step forward in his and the Bills' progress in finding a good starting player. Even if he doesn't play as well, the potential will remain. We just get to see how far he's come to this point.

Prediction: Chargers over Bills
- While I think that the Bills are going to show up a lot more than they did in Week One -- and really, how couldn't they with how poorly they showed in Baltimore -- I cannot pick the Bills to win until they show legitimate improvement in several areas. The offense needs to show some signs of life, in which Josh Allen could provide a spark, and the pass rush needs to show that they can get to the quarterback. As for this matchup, I think Phillip Rivers still has a lot of game to him, and Keenan Allen has all the potential to dominate the game. Playing at home will undoubtedly be a benefit for the Bills on Sunday, but the Chargers are still an incredibly talented group that has the potential to win this game by double digits.