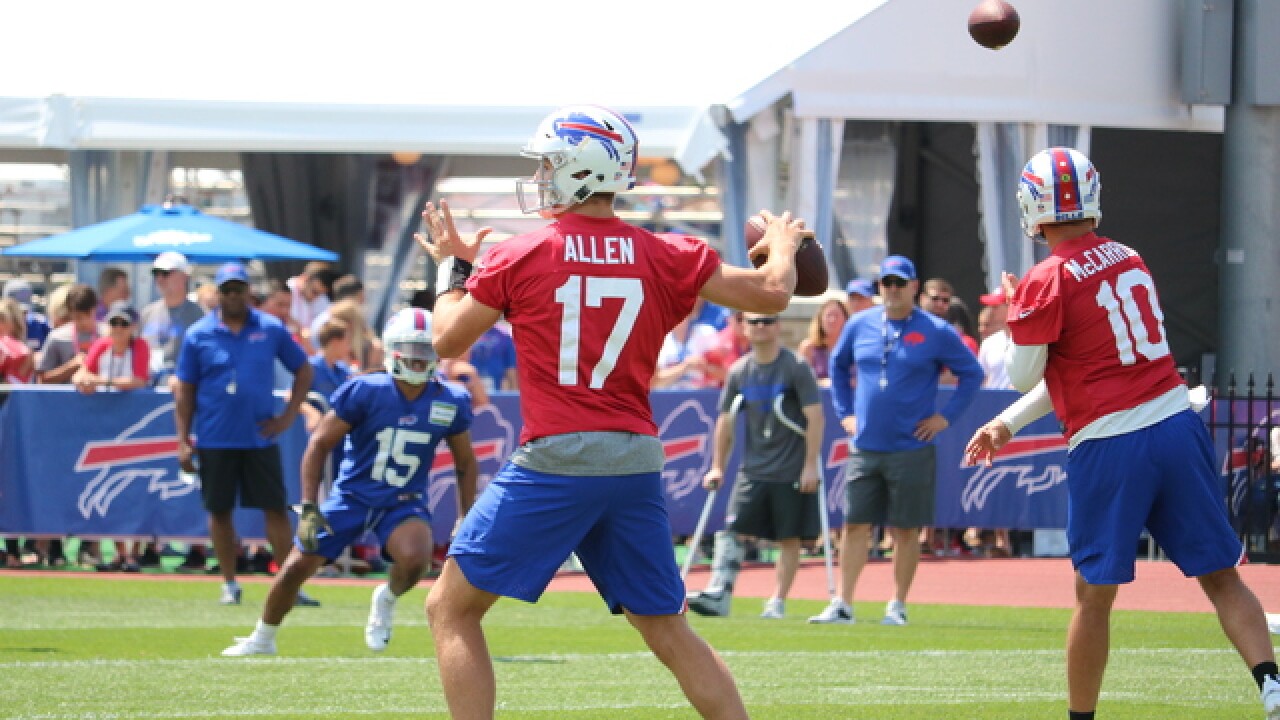 The Buffalo Bills are through with training camp, they’re still knee-deep in a quarterback competition, and now have only two weeks to go before final decisions need to be made for the entire roster.

Over the next 14 days, the Bills have three preseason games and need to make 37 cuts to get their roster to 53. With what’s at stake, what can we look for in their second preseason game — on the road against the Cleveland Browns?

Five things to watch for on Friday night:

1) Josh Allen’s (likely) chance to shine
- Over the final three practices of training camp, Josh Allen took a step forward in the sense that the Bills are giving him the responsibilities to work with the second-team offense. While it isn't confirmed, the expectation is that Allen will be with the second unit and in normal circumstances that is the group that usually gets the most time on the field for the second preseason game. That’s likely by design as “the plan” continues with the Bills and how they develop Allen. However, this is a crucial performance for him. Should he show signs of improvement and do some things that wow the coaching staff, it would make it difficult for them to resist the urge of seeing what he could do with the first-team offense through the final two preseason games. When the lights go on during a game, Allen has the penchant for doing some remarkable things that he doesn’t do during practice because he’s without the threat of getting tackled by a defender. He has been much more consistent at practice since the first preseason game, which makes me eager to see what strides he has made in a game setting. This game for Allen could mean quite a bit to the start of the Bills regular season in 2018.

2) Peterman & McCarron placement
- While the expectation is that A.J. McCarron gets the second start of the preseason, it also sets us up for an intriguing ‘what if’ scenario. Nathan Peterman was given the first start, so if the starting competition was just that, McCarron would be the guy getting the nod. However, if Peterman gets the start once more, it would be fair to wonder what their plan is with McCarron and if Peterman is the odds-on favorite to be the player to start the season. If you follow the way the rotation went leading into the first preseason game, it was technically Peterman’s day with the top unit because McCarron had the previous practice with the top unit. However, the same can be said for the upcoming game in Cleveland because McCarron was once again the player with the top unit the practice before the game. If they do go with Peterman to start things off, it would be fair to wonder what his future might be with the Bills. I suspect, though, that he’ll get his shot on Friday.

3) Corey Coleman’s revenge?
- In his first game with the Bills, of course, wide receiver Corey Coleman will be going up against the organization that gave up on him. He’ll be quite motivated and now has over a week’s worth of knowledge of the playbook and the offense on the whole. He needs to prove himself with the Bills because the Bills owe him next to nothing. They spent a future seventh-round selection on him, which the way those are valued, is the equivalent of an undrafted free agent. While Coleman was a former first-round pick, he was not the Bills’ former first-round pick. If he doesn’t show up with some solid performances over the next three game, his roster safety is not necessarily guaranteed. He’ll likely be working with the second-team offense for the most part. The one thing working in his favor is that he provides a speed element that no one else in the wide receiver group possesses. However, a job just won’t be handed to him because they traded for him.

4) TE risers look to cement themselves
- Since the first preseason game took place, the Bills saw a lot they liked from their tight end group — so much so that they changed around the depth chart upon their return to St. John Fisher College the following week. Nick O’Leary, once thought to be on solid ground for the 53-man roster as the number-two tight end, now finds himself in a battle to make the team at all. While Logan Thomas seems to have rounded out his game quite well as both a blocker and pass-catcher, it was the emergence of two other players that led to O’Leary’s clear demotion. Both Jason Croom and Khari Lee have done enough in the summer to warrant legitimate consideration for the 53-man roster, with Croom looking the part in practices and making a tough catch in the game, and Lee having the best blocking ability of the bunch along with playmaking ability as well. Both Croom and Lee have moved up the depth chart to work with the first and second-team offense, while O’Leary was sent down to the third-team for the most part. If the Thomas/Croom/Lee trio continue to show well in the games, that’s looking to be the tight end group along with Charles Clay.

5) Milano has to prove it
- Over the past week, we’ve seen second-year weakside linebacker Matt Milano go from a locked-in starter to someone that could be fighting to hang on to his starting job. Milano did not play well against the Carolina Panthers. He was caught by a blocker and pushed back on two big runs, and was blown off the goal line during the Panthers’ touchdown run, he also was caught out of position in coverage. All of these have drawn the ire of the coaches, and it’s led to them splitting first-team reps between Milano and mostly Ramon Humber, with Keenan Robinson sprinkled in here or there. The past week could be nothing more than a wake-up call for Milano to try and help him avoid being complacent following a successful first season. However, if he doesn’t turn it around ahead of the start of the regular season, I wouldn’t doubt that the Bills seriously consider using someone else to begin the year. If he shows up well on Friday, I think most of this will mostly go away for a player the Bills want to take a step in his sophomore season.