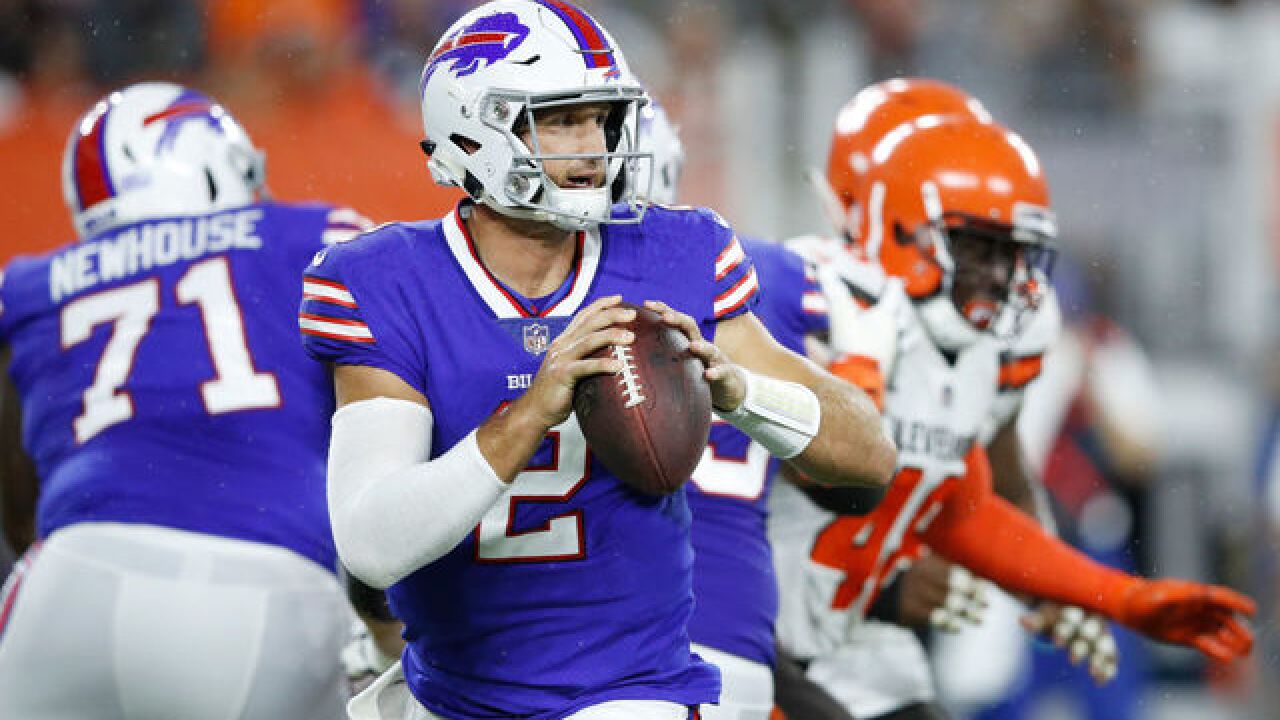 Copyright 2018 Scripps Media, Inc. All rights reserved. This material may not be published, broadcast, rewritten, or redistributed.
Joe Robbins
<p>CLEVELAND, OH - AUGUST 17: Nathan Peterman #2 of the Buffalo Bills looks to pass in the third quarter of a preseason game against the Cleveland Browns at FirstEnergy Stadium on August 17, 2018 in Cleveland, Ohio. (Photo by Joe Robbins/Getty Images)</p>

The Buffalo Bills surprised quite a few with their Week Five victory over the Tennessee Titans. Since that point in time, they've lost their last three games and have another daunting task ahead of them with the improved Chicago Bears coming to town.

And at the most critical position, the team is supremely shorthanded. The Bills will be without their top two quarterbacks, which means they'll need to turn to second-year player Nathan Peterman to start a game for the second time this season.

Do the Bills stand a chance in this game, and where are the matchups that could shape the outcome? Five things to watch for when the Bills take on the Bears:

1) Can the Bills get anything out of Peterman?
- Odds are, the Bills aren't currently employing the worst quarterback in NFL history, which is what the stats from Nathan Peterman would suggest that he's close to being. The trouble is, at this point, we don't know if his ceiling is as a 'below average' player or even worse than that. However, to a certain degree, Peterman is a somewhat confusing player. Yes, he's thrown many interceptions that have made him a running punchline for fans all over the country, but he's also shown flashes of competence. I'll give you three examples. First, in mop-up duty against the New Orleans Saints in 2017. Second, in the first half and throwing for a touchdown in the snow game against the Indianapolis Colts in 2017. And third, just a few weeks ago when he first entered the game against the Houston Texans and leading a drive down the field for a touchdown. Those moments, mixed with his positive work in practice and the preseason, is what keeps the Bills hanging on to the Peterman experiment. The trouble is when the pressure has been ratcheted up, Peterman has shown a nasty habit of crumbling -- and in significant ways. And once again this week, there is potential for things to not go well for the second-year quarterback. However, you keep coming back to those moments that he's had, and wonder if he might be able to sustain those if the Bills call plays within his skill-set. I would look for them to utilize the middle of the field much more than the boundary, and to try and drive the ball down the field. We all know on short-to-intermediate throws to the sideline, that's where Peterman gets in trouble. Though the only sustained success in a game we've seen from Peterman has been in the preseason, and that could be a product of the opposing defenses not game planning specifically for Peterman. At the very least, it will be a compelling thing to watch because while there is a massive potential for Peterman imploding as he has in his previous showings, the Bills actually might be able to move the ball on this secondary, too -- especially if Khalil Mack sits the game out. There are low expectations on Peterman from just about every corner of the NFL universe, and I wonder if that might be a freeing feeling for a guy who might be getting his last shot to start in the NFL. Weirder things have happened. I would not be surprised to see Peterman play far better than he has -- though a game without an interception is what we can define as 'far better' for the embattled quarterback.

2) Defend the short stuff with Trubisky
- The Chicago Bears have done a tremendous job bringing along a creative offense for second-year quarterback Mitch Trubisky, which has helped the offense to a more productive season this time around. They have highlighted his strengths, and have kept defenses guessing with a lot of plays that feature misdirection in one way or another. In the short-to-intermediate game, Trubisky is quite an efficient quarterback that gets the ball into the hands of his receivers in stride to help the potential of the play. The trouble is when Trubisky throws past, say, 12 yards, his accuracy and ball placement dips considerably. At this point in his career, Trubisky is not an effective enough of a deep field thrower, which certainly limits what he can do at the moment. That's why, for a Bills defense that won't have to stick their top cornerback in shadow technique on any of the Bears receivers, it is imperative that they build a wall to take away the short areas of the field while challenging Trubisky to try and push it over the top of them. Now, this isn't to say that Trubisky won't complete some passes past that area. He's a starting NFL quarterback and has the ability. However, that is the area where he is more prone to incompletions and potential mistakes, which is what the Bills need to come away with this game. With Trubisky's playing style, even if he doesn't develop the down-the-field killer instinct, he is a safe enough option to be a starter for much of his career -- because the NFL always values quarterbacks that take care of the ball. Until he proves that he can take the top off a defense consistently, though, I think the narrative of Trubisky's growth is a little overblown. So, with the offense, expect to see a lot of RPO, screen game, and quick-hitter routes. That's their bread and butter -- and the Bills job to take that away as best they can.

3) Akiem Hicks is a line wrecker
- If the Bills were hoping to get their running game in order this weekend against the Bears, they might need to lower their expectations until Week 10 against the New York Jets. Against the run, this is a Bears front seven that's as solid as you'll find. Even without Khalil Mack, they have players that perfectly fit into the scheme that limits the opposing offense on the ground -- and the supremely underrated Akiem Hicks leads those efforts. Hicks is a nightmare for interior offensive linemen that struggle with strength. He holds the point of attack and can whip an offensive lineman aside with ease. If the Bears line him up over the right side of the Bills offensive line (right tackle Jordan Mills and right guard John Miller), I think Hicks can own the matchup -- even against double-team scenarios. If the Bears are without Mack, the Bills need to focus their attention on dealing with Hicks, because he is the top player they have on that side of the ball. With how poorly the Bills offensive line has played over the last three weeks now, the running game will have a tough time against this front in establishing the line of scrimmage.

4) Lotulelei has a plus-matchup
- On the flip-side, the player I think can do considerably well in this matchup is one-technique defensive tackle Star Lotulelei against the interior of the Bears offensive line. Lotulelei, after a slow start, has come on and had a superb October. His quickness at the line of scrimmage when the ball gets snapped is routinely one of the best on the team, and it gives him a leg up right from the get-go. Even if at the very least it helps him to occupy a pair of blockers while the some of the other defensive linemen get one-on-one matchups, he will be doing his job adequately. Should Lotulelei win his matchups consistently, it could help Jerry Hughes into his own one-on-one matchup against left tackle Charles Leno. The Bears left tackle has had a good season, so Chicago might be inclined to think he can hold his own against Hughes to instead deal with Lotulelei on the inside. Should that happen, I think that's a matchup for Hughes to exploit on Sunday if Trubisky holds on to the ball long enough. However, it all starts with Lotulelei and the defensive tackle winning his matchup whenever he's on the field.

5) Don't sleep on Terrelle Pryor -- even only after five days
- The Bills will have Nathan Peterman starting at quarterback, but they'll also have a shot in the arm at wide receiver in the form of 29-year-old Terrelle Pryor. At this point, with so little production from the wide receiver room outside of Zay Jones, the Bills have to be considering giving Pryor a legitimate role on Sunday -- which usually goes against the normal given of getting a newly signed player up to speed. Both Pryor and the Bills have pointed out how he's quickly learning the playbook, and given his effectiveness in the NFL before, I would not be surprised to see him get an Andre Holmes-like role in his first week on the job. Holmes, through the season, has gotten right around the mark of 50-percent of offensive snaps in a given game. For the year, Holmes has taken 49.4-percent of snaps. Pryor adds a certain smoothness to his route running and is a better playmaker than Holmes, so if he knows enough of the offense, I could see the Bills shifting Holmes back into a mostly special teams role -- which was his original purpose with the organization when he signed back in the 2017 offseason. Should Pryor have some success, perhaps his role could grow as the season goes on -- namely if Kelvin Benjamin continues to struggle the way that he has.

Prediction: Bears over Bills
- After having watched both teams and considering who they each have as their starting players, I do not believe the Bears are a team worthy of being a 10-point favorite on the road. Above all else, I don't think that the Bears offense is good enough to take advantage of the Bills good-to-great defense consistently. Now, you have to factor in the Nathan Peterman impact on the game. And while it certainly could get away from him the same way that some of his other appearances did, I honestly believe that the Bills -- and offensive coordinator Brian Daboll -- have learned from their mistakes with Peterman. They have to know what he is, and where he can win through the air, and that isn't to the sidelines. While it might make them a bit more predictable, it also will prevent the game from getting away from them like in his two previous starts. Now, I won't go as far to predict the Bills to win on Sunday, because I don't think they have enough offensive firepower to beat the Bears defense consistently. However, I do think the Bills defense will keep this game closer than some expect, with the Bears finding their way to a victory while the Bills cover the spread. This game reads quite a bit like the Bills-Titans game a month ago -- a low-scoring grind-it-out game with two good defenses. In the end, the team with the more effective offense will eventually get a leg up, and I think the scheming of head coach Matt Nagy will be what does it for Chicago.