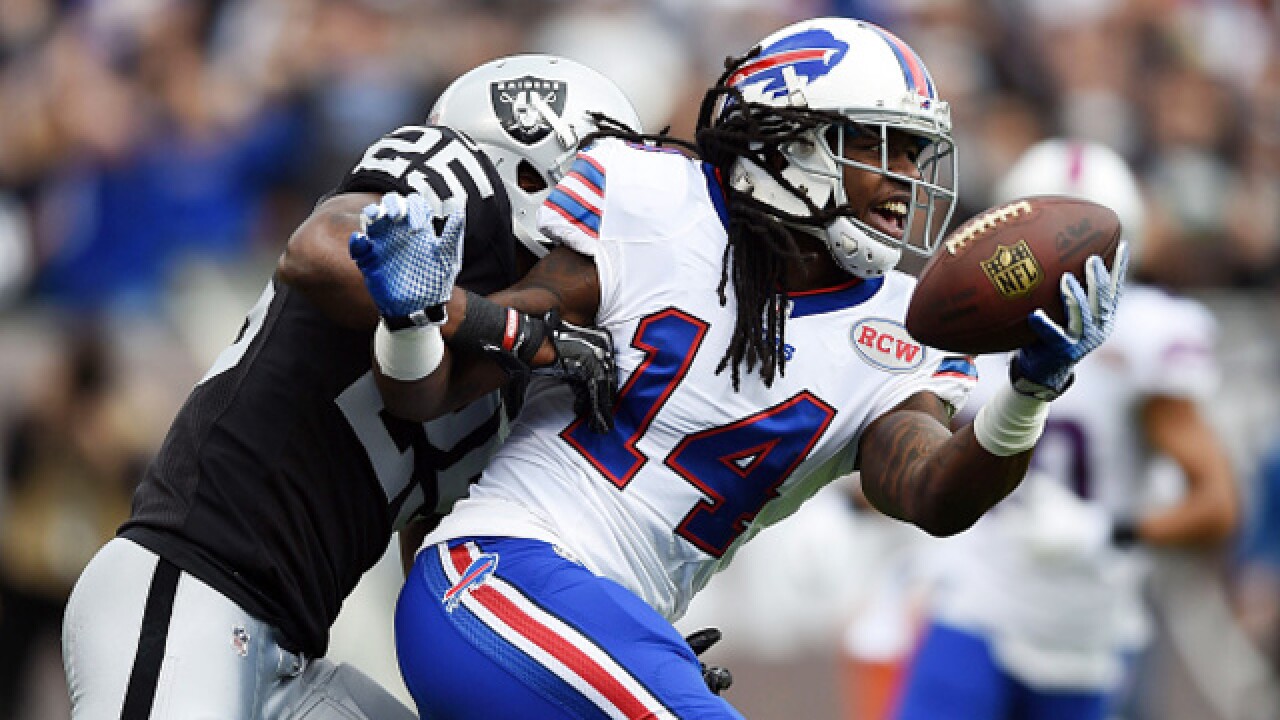 Thearon W. Henderson
<p>OAKLAND, CA - DECEMBER 21: Sammy Watkins #14 of the Buffalo Bills fights the tackle of D.J. Hayden #25 of the Oakland Raiders for a touchdown in the first quarter at O.co Coliseum on December 21, 2014 in Oakland, California. (Photo by Thearon W. Henderson/Getty Images)</p>

Less than a day after the Buffalo Bills completely embarrassed the Miami Dolphins on their home turf, they returned home to start up their preparations for the Week Four matchup with the New York Giants.

Before the players check in on Tuesday to start the work week, head coach Rex Ryan addressed the media and provided various updates on his team. Five takeaways from the press conference:

1) A “possibility” Bills are without Watkins this week
- The Bills spent the majority of the game without top wide receiver Sammy Watkins to use, as a calf injury prevented him from returning to the game after leaving in the first quarter. When halftime came and went, Watkins changed out of his uniform, and his status was quickly changed from ‘questionable’ to ‘out.’ And for that very reason, there is some doubt on his status for the week. Might Watkins have to sit the game out? Head coach Rex Ryan:

Ryan went on to say that could be the case for any player that has to leave a game with an injury like Watkins did, and lumped rookie right guard John Miller, who left with a groin injury, in with Watkins. The Bills have only connected with Watkins for seven receptions and 99 yards in three games. The wide receiver having to sit out would certainly be a blow to the Bills, but, it’s better to get him fully healthy for the stretch-run of the season. The significance of the injury has still yet to be released by the team.

2) Bills don’t rule out resting McCoy
- For two very distinct reasons — the rise of rookie Karlos Williams, and the lack of effectiveness by LeSean McCoy — have led many to the conclusion that it may be time to give McCoy a week off to rest his hamstring injury. Against New England, McCoy looked as explosive as we’ve seen him since suffering a hamstring injury on August 18. However, that was apparently fool’s gold, because McCoy spent plenty of time on the sidelines due to his hamstring. On Monday, Rex Ryan didn’t rule out the notion of resting McCoy:

“We’ll consider doing anything that’s in the best interest of our football players. I’m not gonna say ‘yeah, I’m gonna rest him.’ I think I’ll let our experts, our doctors, and our trainers and all that type of stuff. They’ll tell me, and I think that’s what we’ll do.”

McCoy watch will rage on through Thursday, because the Bills gave McCoy a rest day last Wednesday, and that trend is likely to continue. If McCoy can’t practice Thursday, it will be a bad sign for his availability in the game.

3) High praise for Darby
- Through the first three weeks of the season, the Bills have gotten quite a nice surprise in how well rookie cornerback Ronald Darby has played. Darby has eight pass breakups in three games, but added four of those in the last contest against the Dolphins. Rex Ryan is clearly impressed by Darby, saying that he doesn’t “know if there’s a rookie corner playing better than him.” Ryan concedes that Kansas City cornerback Marcus Peters is also having a solid season, but Darby’s play has certainly inspired confidence, and he may not let go of the starting job when Leodis McKelvin is added back to the active roster in Week Seven.

4) Hogan love
- With Sammy Watkins left on the sidelines because of a calf injury, the Bills turned to backup wideout Chris Hogan to fill in when the Bills were in a three-wide receiver set. In just 31 snaps on the field, Hogan turned four total targets into three receptions, 42 yards, and a touchdown. Hogan had a pedestrian summer that was riddled with drops during training camp. However, Rex Ryan made note —without being prompted — of how well he thought Hogan played. This is important because it means Hogan will continue to have a role as long as Watkins is injured. It also means that when Marquise Goodwin is back from his injury, he’ll have a long, long way to go to get some playing time.

5) Bills “still not there defensively”
- The Bills have an incredibly talented defense, but, they’ve also had some trouble in the early stages of the 2015 season. The Patriots made them look like just another defense, and Miami posted some garbage time statistics against Buffalo’s defense. Rex Ryan said he’s liked the defense, but added that they are “still not there” on that side of the ball. Ryan referenced not coming down with a jump ball on a touchdown, and failing to stay in their zone on the other touchdown pass. The Bills will have another test against Eli Manning, Odell Beckham, Jr., and the New York Giants, because that group will be throwing the ball quite a bit. It’s up to Rex Ryan and Dennis Thurman to fix and adjust wherever they see fit.