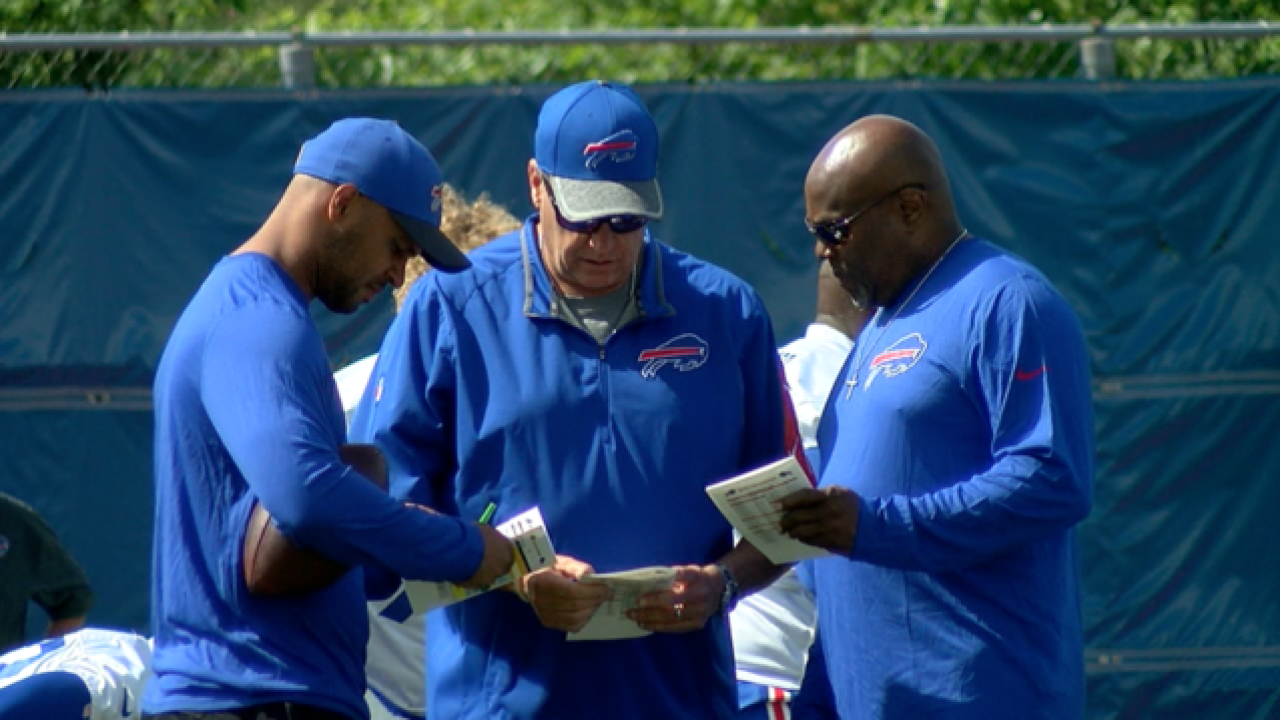 By the end of Thursday, Organized Team Activities for the Buffalo Bills in 2016 will be nothing more than a memory. The team will conclude the tenth and final workout, paving the way for the three-day mandatory minicamp next week.

Head coach Rex Ryan addressed the media following Wednesday’s practice, and served up some interesting thoughts regarding his roster.

Five takeaways from the man in charge of the Bills:

1) Will the Olympics cost Marquise Goodwin his job?
- After Sammy Watkins and Robert Woods, as far as the wide receiver group is concerned, everything is completely up in the air. No player past those two have a guaranteed spot on the roster, which makes it one of the most compelling to track all throughout the summer. One of the more high profile competitors is none other than Marquise Goodwin, who has been a no-show to voluntary OTAs. Goodwin is training for a run at the 2016 Olympic Games, and the Bills aren’t expecting him back anytime soon. So, does that impact his potential spot on the roster?

“We know it is not an ideal situation right now for him on this football team. But it is something, we are proud of the fact that he is representing our country, he is representing our football team, our community. But yeah is it hurting him, I would think so a little bit. But he will have time. He is going to have time to come back and develop those football skills and things.”

If Goodwin were to qualify for the Olympics and go to Rio this summer, the Men’s Long Jump Final is scheduled for Saturday, August 13. So, even if he catches the first flight out of Rio, the first practice he could conceivably be back for is on Monday, August 15 at St. John Fisher College. If that’s indeed the timetable, Goodwin will have only five training camp practices, while the rest of the wide receivers will have had a full spring and summer with the offense and coaches. Already on the bubble as it is, he’ll have to do a lot in a hurry to continue his tenure with the Bills if he makes it to Rio.

2) Gilmore watch coming to an end?
- A notable absence throughout the duration of OTAs has been one of the team’s top players: cornerback Stephon Gilmore. The fifth-year player will be playing under the option year of his contract, and is due to become an unrestricted free agent at the end of the 2016 season. Without a long-term deal agreed upon and signed, Gilmore has decided to keep away from the voluntary workouts. However, at least to Rex Ryan, that’s where it will end. The head coach said he expects Gilmore to be in attendance starting next week for the Bills’ mandatory minicamp — as does one of his closest teammates, Ronald Darby. It becomes a huge story if Gilmore is not in Orchard Park next week, which would indicate a contract holdout could be on the horizon. It’s not what the Bills are anticipating, but we won’t know for sure until next Tuesday.

3) Another corner impressing Rex
- Without Gilmore in attendance, it’s opened up room for rookie Kevon Seymour to get valuable time with the first-team defense on the opposite side of the field from Ronald Darby. The Bills have been quite impressed with how the rookie has played early on in OTAs, but he isn’t the only man that has caught the head coach’s eyes. When asked once more about Seymour, Rex Ryan couldn’t contain himself in his thoughts about another cornerback on the roster:

“Actually another guy I have been really impressed with is Corey White. See number 30 out there and he has done a real nice job for us as well. So real fired up about him.”

White signed a one-year deal as an unrestricted free agent in the offseason. He’s been taking a lot of second-team reps with the Bills, and has even picked off a couple of passes when the media was allowed to witness the practices. White, 26, is now on his fourth stop in the NFL after having spent time with the New Orleans Saints, Dallas Cowboys, and Arizona Cardinals.

“Did not go great. Man, that looked great on paper though. TJ just goes, ‘Please Rex, bring me back to defense.’ I go, ‘Okay, you got it.’ But I love the fact that he was willing to try and he did. It wasn’t just a one day deal, he was trying for a few weeks. At the end of the day he is just like you know, he just did not feel comfortable. As he put it, ‘I am tired of getting my butt kicked out there.’ But to his credit, he was out there battling and he was trying to get better. So, we put him back to defense.”

Barnes is on the bubble regardless of what side of the ball he plays on, but at least now, he’s a lot more comfortable with the role he’s in.

5) Colt Anderson earns high praise
- The Bills signed a bunch of veteran players in the offseason to one-year contracts, and one of them happened to be safety Colt Anderson. Now a six-year veteran of the NFL, the 30-year old Anderson has been depended on in a number of different roles — most notably, on special teams. That is where the Bills are looking for him to make his biggest mark in 2016. Rex Ryan said that when they acquired Anderson, the Bills got “one of the best special teams players in the league.” He went on to call both Anderson and fellow veteran free agent signing Lorenzo Alexander “two monsters on special teams.” Nothing is guaranteed as far as the roster is concerned, but Anderson will at least the benefit of the doubt for everything his done in that phase of the game.