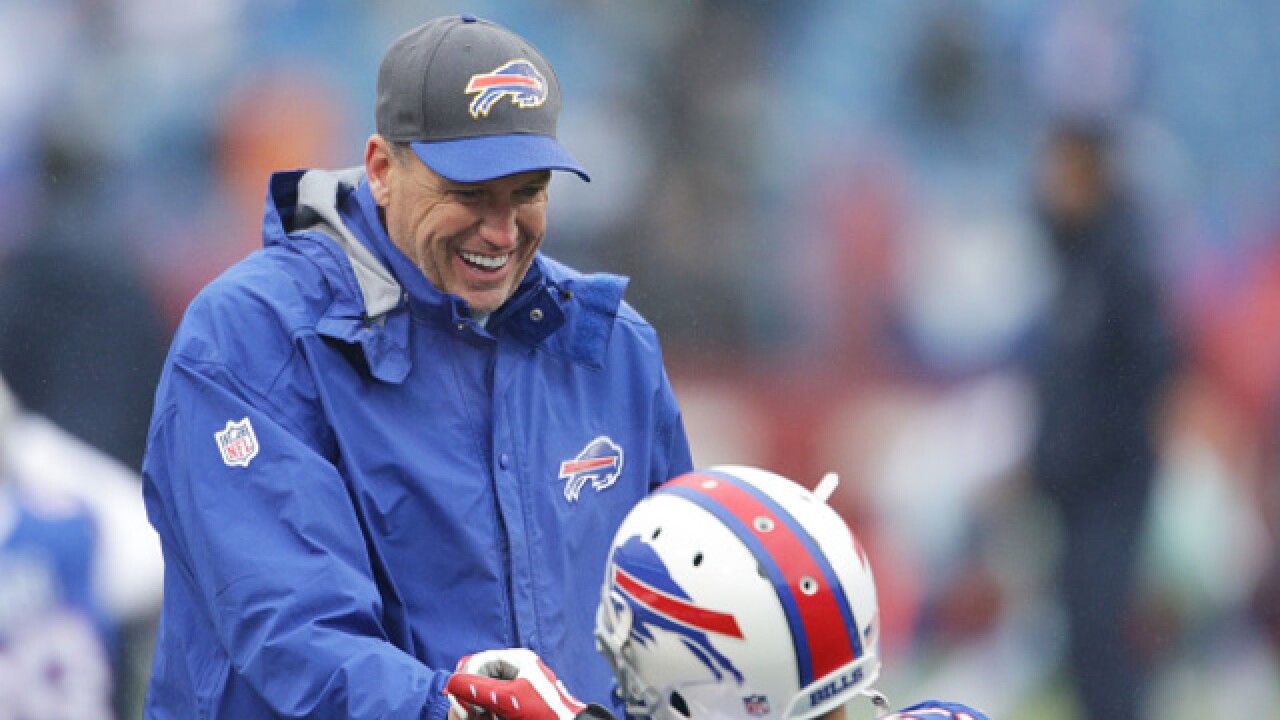 Football is back… kind of.

The Buffalo Bills started voluntary offseason conditioning workouts for the first time on Monday, which is a fancy way of saying that the players were allowed back in the building for a team-sanctioned event for the first time since last season. It was our first chance to see a lot of the new players on the Bills roster, as well as an update on some of the key components to the team.

It was also the first time Rex Ryan has spoken with the media at One Bills Drive since the end of the regular season. So, what were some notable things that were said?

Five interesting tidbits I took away — none of which have anything to do with Ryan introducing Donald Trump on Monday:

1) Interesting quote about Tyrod’s contract
- A big topic of conversation throughout the offseason has been the contract status of Tyrod Taylor. The starting quarterback has one year left on his deal and as quarterbacks in the league go, he is massively underpaid for how well he performed last season. However, the Bills are in a bind — with a lack of cap room, and it seems they’re still unsure about Taylor as the ‘franchise guy.’ As for the contract status, Rex served up a rather interesting quote when asked about it:

Translation: It doesn’t make sense for the Bills to sign Taylor to a big extension ahead of the season. It also might be a glimpse into where the two sides stand at the moment, with Taylor and his agent Adisa Bakari likely wanting to get paid as the market dictates for a starting quarterback with his statistics. Oh, and on Bakari, remember his comments to Sirius XM? If you forgot, the agent blamed the Bills lack of success in 2015 on Rex Ryan’s defense and overall team discipline — not on his client. While Ryan understands Bakari is trying to maximize his client, he said, “The fact that he went about it this way, did it make me happy? Hell no.” Ah, thus is the relationship between an aggressive agent and a head coach of the team that employs his client.

2) A draft hint from Rex?
- While some have wondered if the Bills would actually take a quarterback, a wide receiver, or even an offensive tackle at the draft, the way the entire process has felt all along is that the Bills will be using the 19th overall pick on the defensive side of the ball. The Bills lack some starters and depth on that side of the ball, which led to a potential draft day hint:

“I think we need to add a couple more. When you look, it’s a little bare at a couple positions. Very confident that the draft is coming up.”

The head coach added that he’s confident that it will look “a lot different,” on defense after the draft is done. So, which positions? Well, on the defensive line, Kyle Williams still hasn’t been cleared to participate and all they have is Marcell Dareus and rotational player Corbin Bryant. A starter and depth is needed. At inside linebacker, they have one firm starter at the moment in Preston Brown. At safety, they have depth, but they lack a firm starting option (more on that in a bit). I’d even argue that an edge rusher is needed, although they seem to love Manny Lawson as the other starting outside linebacker for this defense. At the very least, they need depth. So, the options are plentiful which leads me back to what it’s felt like all along — at 19th overall, the Bills are likely going with a defensive player.

3) Seantrel Henderson is an unknown
- Last season, the Bills lost starting right tackle Seantrel Henderson to what they then coined a “non-football illness.” It was later reported that Henderson had been diagnosed with Crohn’s disease, as he missed the final five games of the season. For the first day of voluntary workouts, Henderson was once again not on the field. Rex Ryan said the Bills are “working through that,” and that he hopes “for his sake that he’s ready to roll.” It’s quite clear that the Bills have no idea if Henderson will be able to help them in 2016, which means Jordan Mills is now the odds-on favorite to win the starting right tackle job.

4) Meet your starting and backup inside linebacker — the same person
- When the Buffalo Bills signed inside linebacker Zach Brown, it was out of pure desperation. While yes, they liked his athleticism, size, and starting experience through his first four seasons in the NFL, they also realized it was a necessity to bring a veteran in at the position. As it stands, the Bills have a grand total of three inside linebackers on the team, and three of them all play the same position. So while Preston Brown and Kevin Reddick both play the same spot at the MIKE backer role, Zach Brown is the only thing they have at weakside linebacker.

“He doesn’t have to look over his shoulder, there’s no one there.”

This is another draft hint, if you’re like me and try to find some of those in press conferences. If a run on defensive linemen happen and Ohio State’s Darron Lee is sitting there at 19, the Bills would be awfully tempted to select him.

5) Corey Graham fighting for his starting gig?
- Rex Ryan didn’t bring Corey Graham up directly during his press conference, but the insinuation was clear. The Bills love Aaron Williams, and if he successfully bounces back from his career-threatening neck injury from a season ago, one of the two starting positions is his. Past that, Graham shouldn’t feel too safe even if he started in 2015. When asked about some of the new additions to the team, Ryan brought up free agent signing and safety Robert Blanton without being prompted.

“He’ll be competing for a starting spot.”

So, by the process of elimination with what we know about Aaron Williams, it’s quite clear that Graham will have to battle for his starting gig. Don’t rule out the Bills utilizing one of their top two picks in the draft on a safety, either. Graham was average at best in 2015, and Blanton is signed to a low-cost one-year contract. It could be a spot for a rookie to win the job outright.