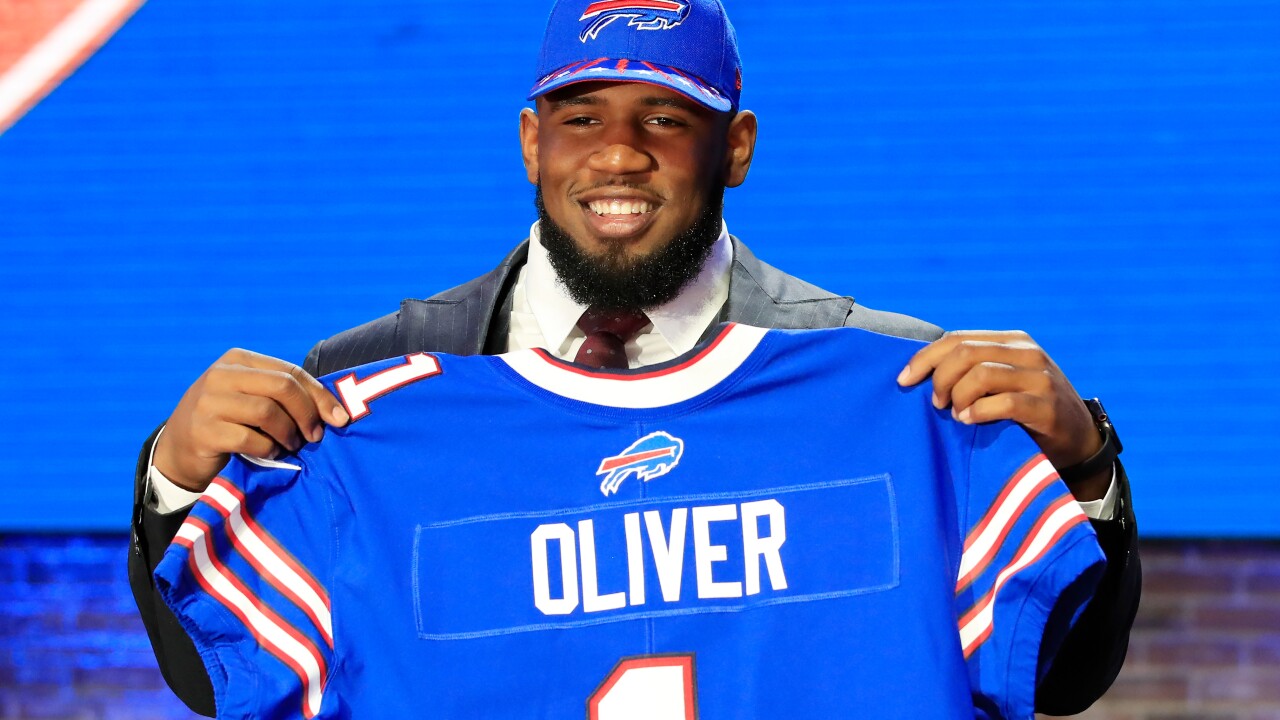 ORCHARD PARK, NY (WKBW) — After months of offseason angling and player movement, the Buffalo Bills finally got on to the field in their first official event of the 2019 campaign. No, it wasn't the full squad -- but it's usually the newest members of the team that fans get quite excited about heading into the next season.

On Friday, the Bills got the first glimpse of their rookie class on the field for the annual minicamp for first-year players and others that earned a tryout from the team.

How did it all look? Who stood out? Five observations from rookie minicamp:

1) Ed Oliver dominates the tryout linemen
- In only helmets, jerseys, and shorts, it wasn't a fair fight. Matched up against tryout players that were fighting for a spot on the team's 90-man roster, the Bills' first-round pick Ed Oliver was routinely in the backfield before a play could get started. His quickness and explosion out of the snap were extremely noticeable, as was the usage of his hands and shoulders in getting under the arms of the offensive linemen to work his way in the backfield. In positional drills, Oliver looked quick, smooth, and effortless. The only time I witnessed someone getting the better of Oliver was when second-round pick Cody Ford won the rep in team drills and pushed him into the backfield and away from the play. But that was it. It was blatantly evident that Oliver was the most talented player on the field, which is precisely the way that it should be for a top ten pick working against players that have the odds stacked against them in sticking around Buffalo past the weekend. For the coaching staff and front office, Friday was just a day where they could check the box on what Oliver did, knowing that the actual test will be once the veterans hit the practice field, and when the pads go on in late July for training camp.

2) Cody Ford, as expected, at right tackle
- Offensive lineman Cody Ford, the team's second-round selection, began his Bills journey at right tackle -- just as GM Brandon Beane said it would after the Bills selected him in late April. Just the same as Oliver, Ford was seen mostly working against tryout players. And also like Oliver, Ford looked smooth on his first day in Bills colors -- which is expected considering the level of competition he was up against on Friday. However, the most striking aspect of Ford's day was that he was indeed at right tackle, which means the battle for a starting job between Ford and veteran Ty Nsekhe will begin at the first day of OTAs in a couple of weeks. And that's also when we'll start to learn a bit more about Ford and how he handles reps against players like Trent Murphy and Shaq Lawson, and if he's ready to be a starter right from the get-go in Buffalo.

3) Drafted TE duo shows ability
- During the 2019 NFL Draft, the Bills added to their tight end group twice in the form of third-round pick Dawson Knox and seventh-round selection Tommy Sweeney -- and both had their moments on Friday. Knox is the flashier pick, primarily because of his potential as both a receiver and a blocker. The Ole Miss product showed his ability as a route runner in a one-on-one matchup versus a linebacker, setting him up for an inside route, only to break him off with a post corner and easy separation. Knox also showed that he could go up and win a contested catch over the top of a defender in practice. However, he was fighting the ball a bit Friday, and still needs to find the same precision on all his other routes to become the player they think that he can. However, you saw all of the signs that the Bills likely wanted to see in his first practice. Sweeney showed a fantastic ability in getting separation in the short-area routes, along with smooth hands to bring the ball in, which will likely be his bread and butter as a player in the NFL. I don't think he'll confuse anyone with being a flashy, vertical threat. However, as long as he shows well as a blocker, as was his reputation in college, you could make the case that he's more game-ready in a small, defined role than Knox. Sweeney will need to beat Jason Croom for the third tight end spot on the roster, but the Bills could also keep four tight ends if both have a good summer of work. However, this was a solid starting point for both of their rookie tight ends.

4) Christian Wade shows some wiggle
- Heading into the first workout of the year, I didn't know what to expect from the former rugby star turned NFL running back Christian Wade -- and I don't think the Bills knew what to expect either. Wade is 27 years old, has never played organized football, and is trying to learn on the fly at the highest form of the sport possible. However, when Wade was in open space, you could see all the things that made him unique in his previous game. He showed great speed with the ball in his hands, the ability to set defenders up to make them miss, and a natural vision down the field. However, one of the toughest positions to get a gauge on in these non-padded practices is running back, because the game completely changes once football becomes a bit more true to form in late July at training camp. However, for not having any expectations on what Wade would look like in the first football practice of his life, I would be hard-pressed to find anyone that watched the entire workout that didn't come away pleasantly surprised by Wade in that setting. His story, and how he develops, will be one of the more fascinating ones to track as the spring and summer progress.

5) Tyree Jackson struggles with the wind
- When the news came down on Thursday night that Derek Anderson would be retiring from the NFL, the path for undrafted rookie quarterback Tyree Jackson became clear. All he has to worry about, at least for the time being, is showing enough ability to the coaching staff to keep him as the third quarterback on the 53-man roster -- which is still a daunting task in itself. He does not have to worry about beating another player at his own position for that spot, so really, it's Tyree vs. Tyree at the present moment. In the rookie minicamp, there were likely a lot of nerves, the wind was blowing harder than a typical mid-May day might bring, but we saw a bit why Jackson wound up as an undrafted free agent. There were a few times where Jackson got out of the pocket and showed off his natural playmaking ability and plus-arm by delivering a strike down the field. However, there were lots of examples of the ball coming off his hand with a bit of a wobble and his accuracy dipped as a result. I think it will all be about getting his mechanics and footwork in order within the pocket as to whether Jackson will be able to crack the active roster in September. It's never wise to write anyone off for how they practiced for the first time because you must factor in the human element. Jackson showed some good plays, and those are the ones the Bills will try to work with him on to unearth more often than what we saw on Friday. However, there is no question that Jackson is raw, and a bit of a project -- but one that the Bills have the flexibility to try and develop over the next three-and-a-half months.