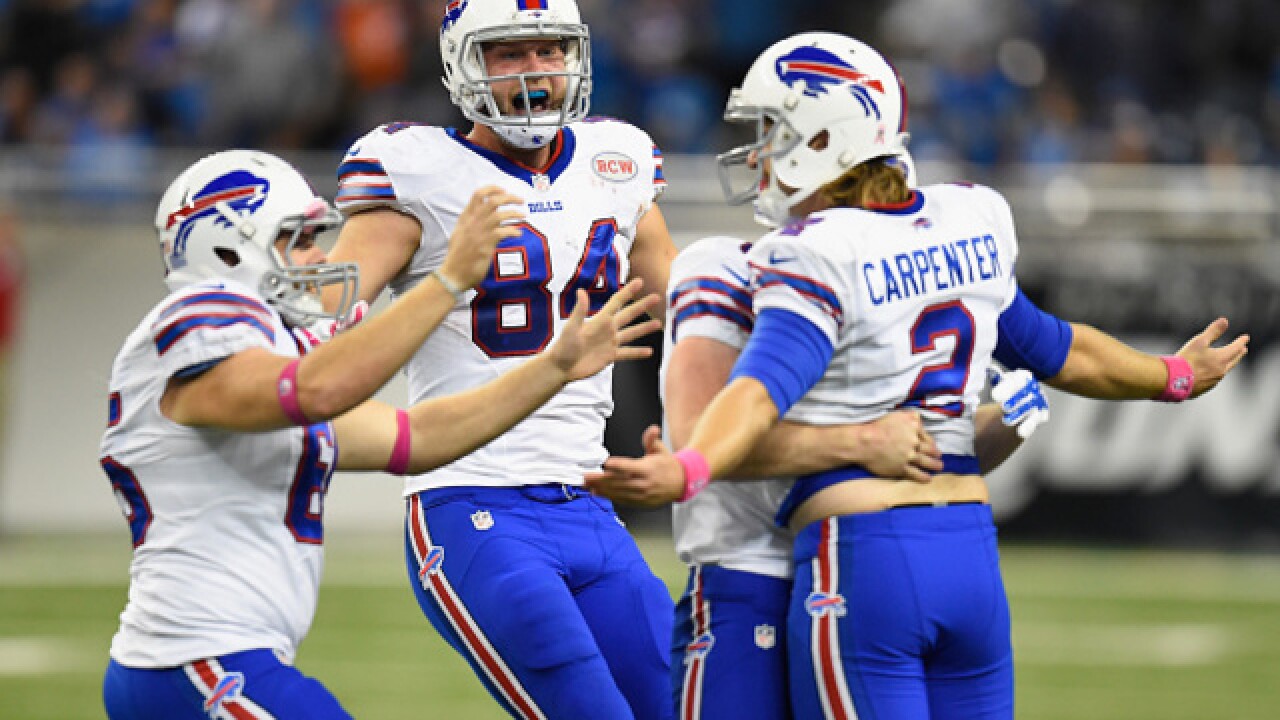 The Buffalo Bills are approaching the regular season opener against the Indianapolis Colts, and went through their final preparations on Thursday and Friday.

What are some of the last minute things we learned? Here are some notes from practice over the last couple of days:

1) Percy Harvin a “full-go”
- For most of the summer, the Bills have had to go forward without wide receiver Percy Harvin practicing with the team. Harvin’s hip injury has sidelined him, and has made the Bills proceed with a little bit more caution as they move closer to the regular season. They gave the wide receiver a rest day on Wednesday, but Harvin was back to practice as a full participant on Thursday. Asked after practice about his availability for the upcoming game against the Indianapolis Colts, head coach Rex Ryan said that Harvin would be a “full-go.” Despite the head coach’s proclamation, it would be hard to think they would put a full load on him right away with two more than capable receivers in Sammy Watkins and Robert Woods also on the roster. The likeliest outcome would be Harvin being the third man in for the games, just to work him in slowly. He hasn’t gotten into any game action since becoming a member of the team, so, while his availability will be a welcomed sight, it might not be in their best interest to put a full load on his plate right away.

2) Bryant could be “the guy” elsewhere
- The Bills will be without their newest $100 million man Marcell Dareus on Sunday against the Colts due to a one-game suspension, but, the Bills are quite confident in backup defensive tackle Corbin Bryant. After having one of the strongest training camps of anyone on the team this summer, Bryant has certainly stepped up his game from being an average player in his first two years with the Bills. He’s caught the eye of his teammates, as well. Kyle Williams, who Bryant will be starting next to on Sunday, concluded that the Bills are lucky to have him because he could be “the guy” anywhere else. The Bills are as deep at defensive tackle as anyone in the NFL, boasting both Bryant and Stefan Charles on their roster. Still, it’s hard to replace one of the best — if not the best — defensive tackles in all the league.

3) No Goodwin or Steward on Sunday
- The Bills injury report is pretty straight forward for the regular season opener on Sunday, and the only two players that did not participate at all through the week are the only two that will not play. Wide receiver Marquise Goodwin (ribs) and linebacker Tony Steward (knee) each could not participate throughout the week, and now neither are ready to play on Sunday.  Goodwin’s two fractured ribs have been quite painful for the third-year receiver, and Rex Ryan said the wideout is now able to sleep, which is a step in the right direction. Steward’s absence will put a big workload on undrafted free agent rookie A.J. Tarpley, who will inevitably get some snaps on defense if an injury occurs to either Nigel Bradham or Preston Brown. The Bills are painfully thin at linebacker.

4) Rex has “full confidence” in Dan Carpenter
- After a preseason that yielded only three successful field goal tries on six attempts, and a missed extra point to boot, head coach Rex Ryan aimed two separate blasts in kicker Dan Carpenter’s direction. The Bills have even had kickers in for tryouts according to reports, but, Ryan came out in support of Carpenter on Friday. He said that the kicker has proven himself in a regular season setting, and that he has full confidence in Carpenter. Rex would like his comments to spur the kicker to take action:

#Bills HC Rex Ryan says he has full confidence in K Dan Carpenter, and "if he wants to stick it to me too, that's fine. I love it."

Sunday will be a big day for Carpenter, and if he struggles, the Ryan’s frustrations could boil over once again.

5) Bills haven’t decided on Jordan Gay just yet
- Speaking of kickers, the Bills have made multiple references to being one of the only teams in the league to keep a kickoff specialist on their roster. If they have one, the normal presumption is that they’ll use him on game day to handle those duties, and allow Carpenter to concentrate solely on field goals. However, that doesn’t seem to be the case for Rex Ryan. The head coach said on Friday that he’s still trying to make up his mind on whether or not to dress Gay for the regular season opener, and he also pointed out that Gay “better be great” at kickoffs, to which he pointed out, he has been in 2014. If Carpenter struggles and the Bills don’t dress Gay, there could be grounds for a lot of turnover in the special teams room. It usually goes without saying for specialists, but both really need to perform well this week to earn the trust of the coaching staff.