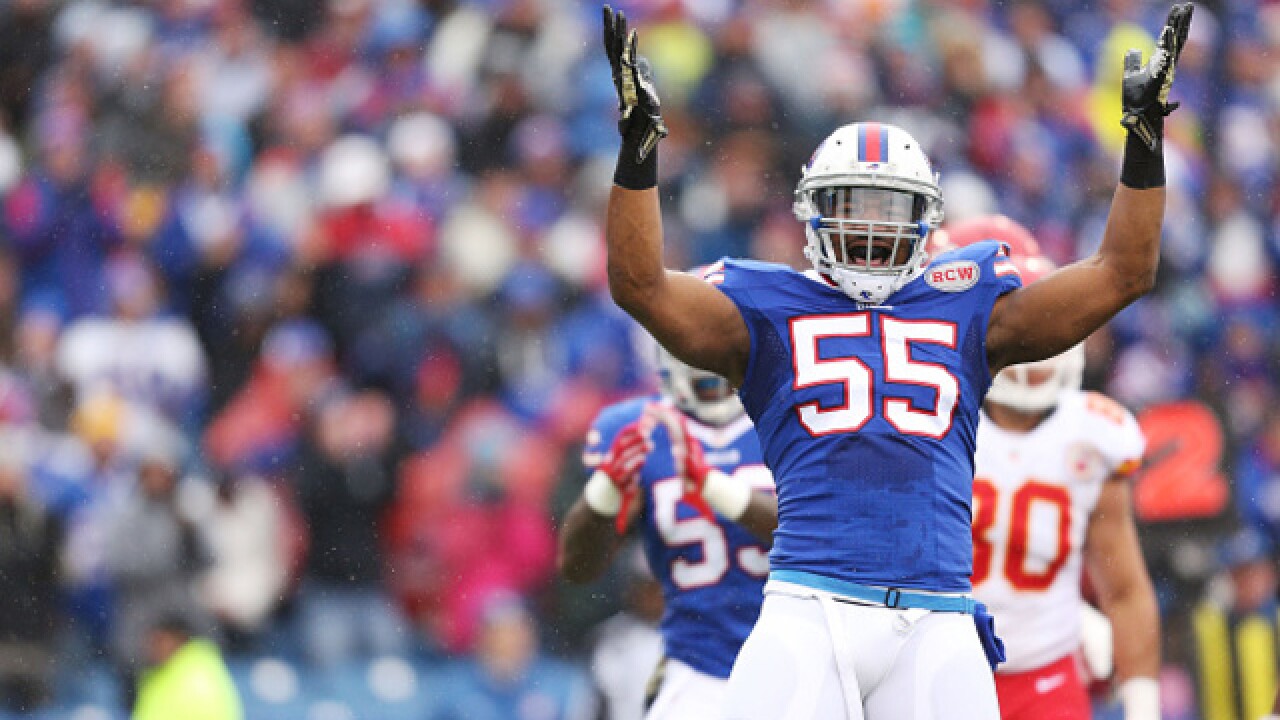 Brett Carlsen
<p>ORCHARD PARK, NY - NOVEMBER 09: Jerry Hughes #55 of the Buffalo Bills celebrates a tackle for a loss against the Kansas City Chiefs during the first half at Ralph Wilson Stadium on November 9, 2014 in Orchard Park, New York. (Photo by Brett Carlsen/Getty Images)</p>

The Buffalo Bills are now just two days away from an important AFC East matchup with the Miami Dolphins. So, how is the team shaping up before they head down to South Beach?

Five notes to wrap up the end of the week:

1) Hughes will play, and it’s important this week
- A new entrant on the injury report, defensive end Jerry Hughes was limited at practice all week by an injury on his left wrist. On Thursday he was wearing a taped pad for support, and then Friday, he sported a brace on it. However, there is no cause for concern for this week. Hughes was officially listed by the Bills as probable and he’ll face one of the most advantageous matchups he’ll see all year long. Normal starting left tackle Branden Albert is doubtful to play, which means below average backup Jason Fox would get the start. Hughes could be in line for a humongous day.

2) No A. Williams, Rambo steps in
- Upon suffering an injury to his neck against the New England Patriots, starting safety Aaron Williams did not practice at all in the week leading up to the Dolphins game. He is officially listed as out, and although the Bills tried to be coy earlier in the week, he’ll be replaced by Bacarri Rambo according to Rex Ryan. Rambo received the majority of the snaps after Williams sustained his injury, and did the same in Week One for Corey Graham. Those that wonder if it’s a big difference from one safety spot to the other, Rambo said after practice Friday that there is no ‘free’ or ‘strong’ safety in this defense, and it’s all virtually interchangeable. Still, losing Williams is a big blow for the pass defense against Ryan Tannehill, who is not afraid to throw into a tight window, and does it with confidence.

3) McKelvin’s progress
- He is still weeks away from a return, but Leodis McKelvin is continuing to come along after having a breakthrough two weeks ago. McKelvin still resides on the Reserve/Non-Football Injury list and is ineligible to be added to the active roster until Week Seven, but is making clear progress. See for yourself:

He continued on Friday, going through his normal stretching routine on the field with the rest of the team.

4) Easley scare?
- One of the top special teams players on the roster, Marcus Easley, had to be limited over the course of the final two days of practice due to a back injury. It came out of nowhere, and was at least a little cause for concern. Even on the final injury report, the Bills officially listed the wide receiver as questionable… but that was just for show, it seems. Within minutes of labeling Easley questionable, Rex Ryan told reporters that Easley is tough, and he’ll be good to go on Sunday against the Dolphins.

5) Goodwin’s out
- Despite the steps in the right direction through the week, it appears Week Three wasn’t the one for Marquise Goodwin to finally get back on the field. Goodwin, who fractured two ribs in the preseason, was a limited participant through the first two practices of the week. On Friday, however, Goodwin couldn’t participate, and was promptly declared ‘out’ for the contest with the Dolphins. As much as he doesn’t want it to be an issue, Goodwin’s injuries through just three seasons have defined his career. After missing his third straight game to start the season, Goodwin will have missed 13 of a possible 35 games he could have played in. His speed keeps coaches coming back, but, the injuries have left him in the dust on the depth chart the past two seasons.