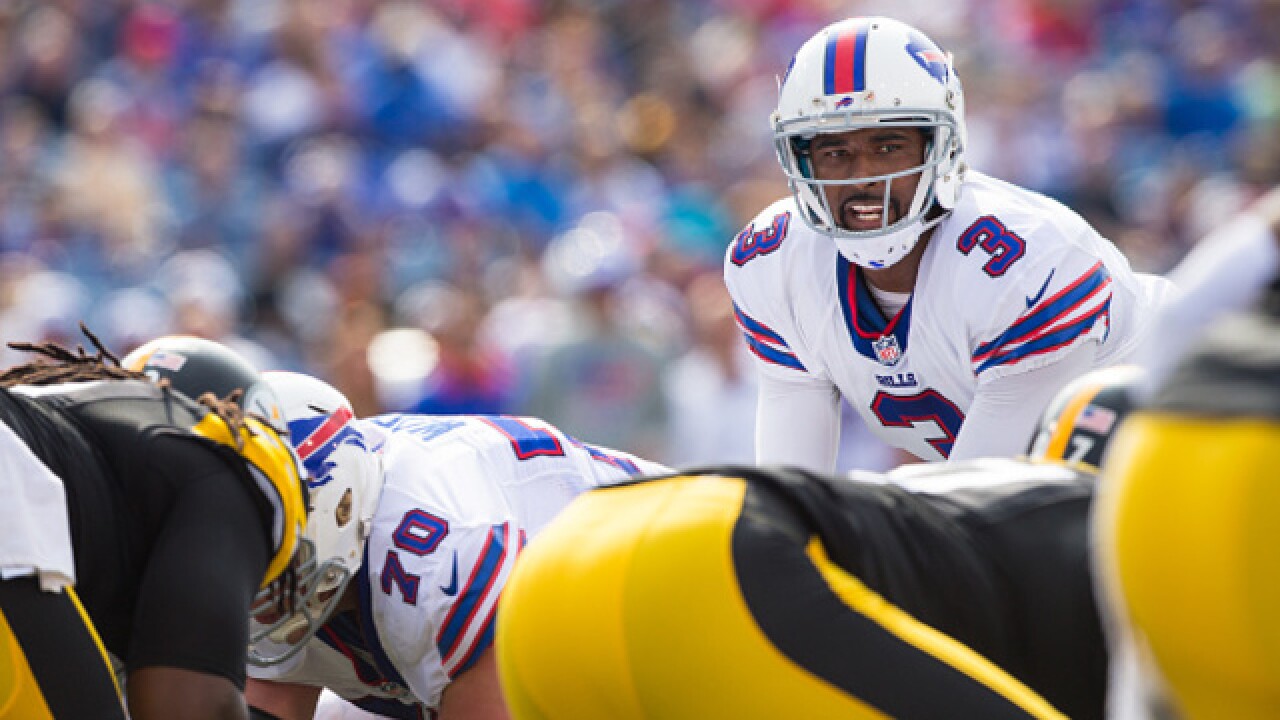 Brett Carlsen
<p>ORCHARD PARK, NY - AUGUST 29: EJ Manuel #3 of the Buffalo Bills speaks to teammates during the first half against the Pittsburgh Steelers during a preseason game on August 29, 2015 at Ralph Wilson Stadium in Orchard Park, New York. (Photo by Brett Carlsen/Getty Images)</p>

Well if there is one thing that the 2015 version of the Buffalo Bills have taught us, it’s that there is never a dull day at One Bills Drive.

For Week Three, and his weekly address to reporters for media day, Bills head coach Rex Ryan took any and every question that was in regards to the team’s most recent transaction. Of course, there was more than just that during the practice day.

So, here are five notes from practice on Wednesday, September 23:

1) The Bills defend Cassel deal with belief in developing EJ
- Just two weeks after the Bills brought Matt Cassel back into the fold to be the immediate backup to Tyrod Taylor, the team apparently had a change of heart. The Bills dealt Cassel to the Dallas Cowboys, and in return, managed to improve only a late round pick in the 2017 NFL Draft. The trade was a rather peculiar decision of a team that hasn’t shown, through their actions, much confidence in EJ Manuel to be the team’s backup, or even as a legitimate starting option for the 2015 season. Instead, the Bills are going with two players that have a lack of experience in the NFL, during a season that the team have repeatedly looked at with the playoffs in mind. The Bills maintained that they viewed Manuel as a legitimate backup option all along. Manuel was called “inferior” to Cassel, and Rex Ryan took exception to it:

Like it or not, this quote on EJ Manuel from Rex today will likely have some staying power #Bills pic.twitter.com/Vzx9UrAVpA

Regardless, now the Bills will go into a critical season with only Taylor and Manuel as their quarterbacks.

2) Tyrod, Hughes pop up on injury report; Williams sits
- The Buffalo Bills have been mostly healthy through the first two weeks of the season, but a few more names — a couple of which unexpected — were listed on Wednesday’s injury report. The most significant of the new, listed injuries was defensive end Jerry Hughes, who was a limited participant due to a wrist injury that was likely suffered against New England. Starting quarterback Tyrod Taylor was also on the injury report, but practiced in full with a chest injury. Taylor, kicker Dan Carpenter (abdomen), and punter Colton Schmidt (right hip) all were full participants in Wednesday’s practice. As expected, starting safety Aaron Williams was a non-participant after he suffered a neck injury against New England. The Bills previously called his likelihood to play in Miami as “a stretch.” The injury to Taylor doesn’t appear to be that serious, but, Hughes’ status will need to be monitored as the week carries on.

3) McCoy, Harvin rest
- The Bills have successfully geared up wide receiver Percy Harvin the past two weeks for the games, by giving him a rest day on Wednesday of each week. Harvin gets an extra day to rest his lingering hip injury, but is a full participant through the final two days. Now, LeSean McCoy is getting a similar treatment for his hamstring injury. Both Harvin and McCoy did not participate in practice so they could both rest, but both are expected to make a full return on Thursday.

4) Goodwin, Steward return
- For the first time since mid-August and during training camp, the Buffalo Bills finally had both wide receiver Marquise Goodwin (ribs) and linebacker Tony Steward (knee) on the field for practice. Both players were listed as limited participants, but have been working back over the past week to get to this point. Goodwin fractured two of his ribs against the Pittsburgh Steelers in the preseason, which makes his status for the upcoming game rather unclear.

Steward, even if healthy enough, is a likely candidate to inactive on game day because he’s been away for so long, and undrafted rookie A.J. Tarpley has done well to be the backup inside linebacker for the Bills.

5) Bills promote Meeks, sign QB Dustin Vaughan
- Another day, and another roster transaction for the Bills. Since they traded away Cassel, it opened up a spot on the 53-man roster for someone to fill it. With so much uncertainty about Aaron Williams’ status for the weekend, and with a poor performance from backup Duke Williams, the Bills elected to promote former fifth-round pick Jonathan Meeks from the practice squad. The Bills then made the move to add an intriguing name at quarterback to their practice squad to run scout team through the year. A former member of the Dallas Cowboys, Dustin Vaughan signed with the Bills practice squad officially on Wednesday.

Someone that looks a lot like QB Dustin Vaughan was a visitor at #Bills practice. Signing with the PS, per @RapSheet pic.twitter.com/9ViO4MD2qq

At 6-foot-5, and 220-pounds, Vaughan has the prototypical size teams covet. He was an undrafted free agent out of West Texas A&M in 2014.