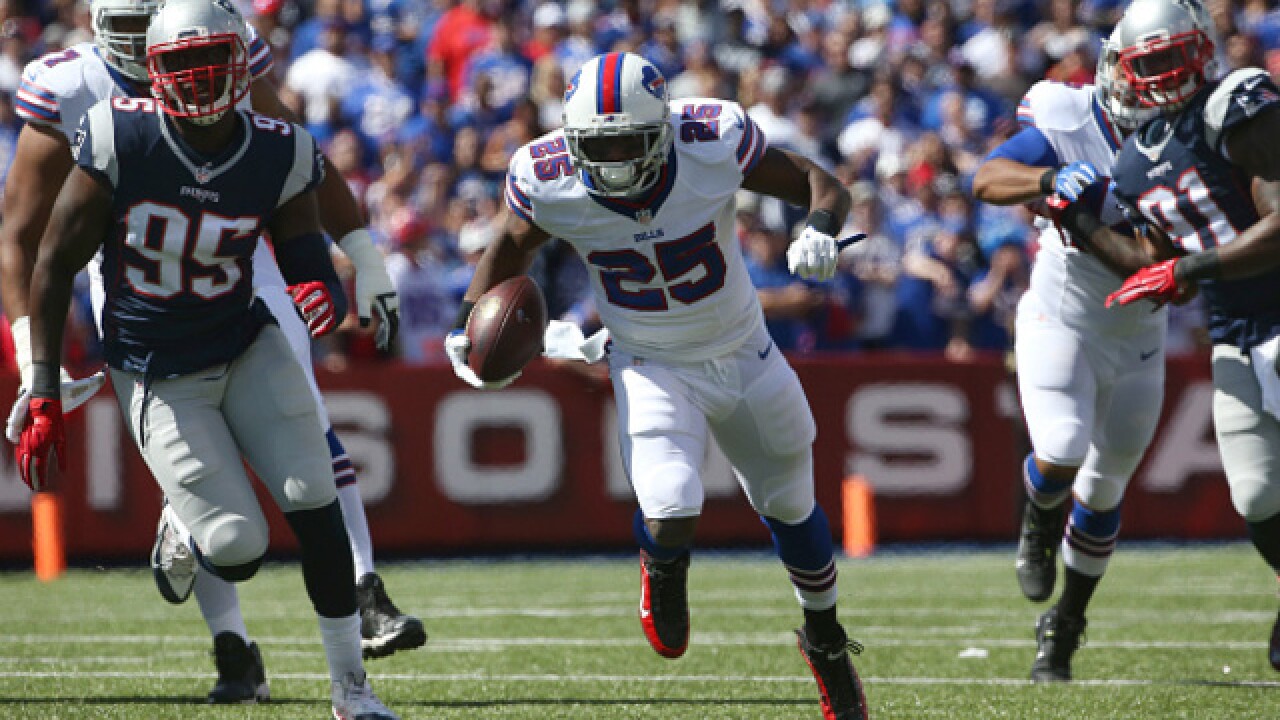 For the first time in the 2015 season, the Buffalo Bills are facing quite a great deal of adversity due to injuries. At first it was just the prevailing thought, but now, it’s official.

The Bills will be without some key players against the New York Giants on Sunday. Here are the full details and other notes from practice over the last two days of work:

1) McCoy: “I’m not playing until I’m 100-percent”
- If the way LeSean McCoy was speaking to reporters on Friday is any indication, the Bills could be setting up for having life without their top running back for more than just this week. McCoy had some pretty glaring quotes:

“As much as I want to go out there and help my team out and play, it’s actually hurting me and my teammates… certain plays that I should be making, I’m not because I can’t physically do it. There’s so much you think about. Coming to this team, the team we have you just want to come out here and perform, so I was trying to fight it off. But, I can’t play through pain. I can, but it’s not doing well for me.”

“One thing I promised myself is I can’t go out there if I’m not 100-percent. So, if it’s this game, or next game — whenever it is, I’m rushing to get back but I’m not playing until I’m 100-percent”

“To be honest, I’m not the bruising type. My thing is make people miss and get out of there. If you can’t do that, you can’t do nothing.”

McCoy let it be known that following the Week Two loss to the New England Patriots — a game that it looked as though he regained the acceleration that he had lost with the initial hamstring injury — that the following Thursday he tried to push it, and ended up suffering a setback. Without McCoy, perhaps for more than just this week, it will be rookie Karlos Williams’ time to shine in the offense.

2) Watkins out for first time ever
- Even though he’s had injuries throughout the first 19 games of his career, wide receiver Sammy Watkins never actually missed a start because of them. On Sunday, that will happen for the first time. Watkins, along with McCoy, was ruled out for this weekend’s contest against the New York Giants. The wide receiver is dealing with a calf injury and will be replaced in the lineup by Percy Harvin as the top target for Tyrod Taylor. You have to wonder if Watkins’ injury might be one that keeps him more out than just this week as well. He didn’t practice at all during the week, and the only activity we saw him do was lightly riding the exercise bike on Friday. It will be a situation to monitor all next week, too.

3) No A. Williams just yet
- Unlike McCoy and Watkins, the Bills did have starting safety Aaron Williams at practice in a limited capacity all week. However, less than two weeks removed from could have been a very serious neck injury, the Bills are using caution with their starting safety. Williams has been declared out once again, which means Bacarri Rambo will get the start for the second straight week. Even before the official declaration, there were hints all week that Williams wouldn’t be ready to play:

The Bills will have to be a little careful with Rambo against the Giants passing offense, for quite obvious Odell Beckham, Jr.-related reasons.

4) Miller out, Urbik in
- Like Watkins, the injury to rookie right guard John Miller that was sustained in the Miami game, will prevent him from playing this weekend against the New York Giants. Miller didn’t practice at all during the week which led to the decision to sit him out of the upcoming game. The injury is interesting not for the reason you’d expect. Kraig Urbik enters the starting lineup at right guard, but it really isn’t that much of a drop-off from Miller to Urbik, so that isn’t that big a deal. The more concerning part is what happens if one of the three interior players for the Bills sustains an injury. Regardless of who it is, that will likely push Gabe Ikard into the lineup, a player that has struggled in practice. Keep an eye out for this.

It’s becoming less of an issue with how well Ronald Darby has played through the first three weeks, but the Buffalo Bills could use some depth at the cornerback position. He’s not eligible to return until Week 7, however, Leodis McKelvin continues to make significant progress from his ankle injury.

If Darby hits a rookie wall, or, an injury happens, McKelvin will be a solid insurance policy when he’s available to the team.