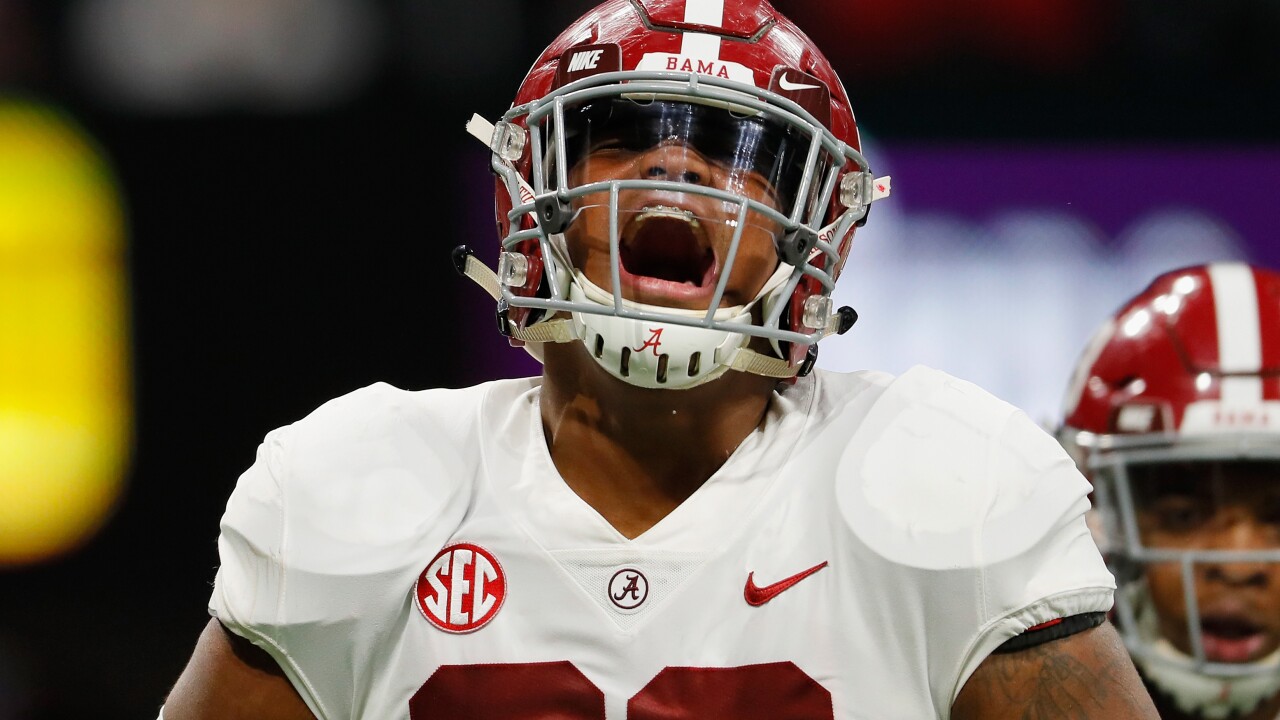 Kevin C. Cox/Getty Images
ATLANTA, GA - DECEMBER 01: Quinnen Williams #92 of the Alabama Crimson Tide reacts after sacking Jake Fromm #11 of the Georgia Bulldogs (not pictured) in the first half during the 2018 SEC Championship Game at Mercedes-Benz Stadium on December 1, 2018 in Atlanta, Georgia. (Photo by Kevin C. Cox/Getty Images)

(WKBW) — We finally made it. Draft week is here, and all of the rumors and posturing will be put behind us.

However, still with three days to go, the angling will reach a fever pitch before all is said and done. And for the Buffalo Bills, how might all the rumors impact their draft plans?

My second-to-last look at how it could all go down on April 25:

Joe B. and the 7 Eyewitness News sports team will break down what you need to know heading into the draft in a live draft special Thursday, April 25 at 7:30 p.m. Stay with 7ABC for Round 1 of the NFL Draft on Thursday night, Rounds 2 and 3 on Friday starting at 7 p.m., and Rounds 4 through 7 on Saturday starting at 12 p.m.

1) - QB Kyler Murray, Oklahoma
- Murray has been the top pick the whole way, and he'll likely be atop the order on Thursday when I release my final mock draft.

- EDGE Nick Bosa, Ohio State
- The 49ers would like to move out of this selection and pick up a ton of draft capital, but since it would take too strong of an offer to get there, the 49ers settle on taking what many consider to be the top player in the entire draft. And at a major position of need, no less. Not bad.

3) - DT Quinnen Williams, Alabama
- The Jets are attempting to move down the board, but this time around are unsuccessful. So, they stay in their space and take the best player on the board in Quinnen Williams. As for the Ed Oliver heat at this spot, with him being one of the hotter names in the draft right now, I wonder if that was floated out there to try and induce a trade up to three to get him. Either way, I'm sticking with Williams for now.

4) - DT Ed Oliver, Houston
- I'm quite conflicted between Oliver and Devin White for this selection, but I went for the player that puts the most heat on the quarterback between the two -- which is something the Raiders were in dire need of in 2018.

5)   - LB Devin White, LSU
- With the depth at linebacker lacking in this draft, the Buccaneers get the top one on the board and hope he has an immediate impact.

6) - QB Daniel Jones, Duke
- I don't know if this is the best value for Daniel Jones, but it seems that the quarterback is a lot more well-liked in NFL circles than on Twitter. As we know, the Giants need a long-term plan at quarterback -- though I don't think they can wait around until the 17th selection to take one.

7) - OT Jonah Williams, Alabama
- If the Jaguars stay in this spot, I would not be surprised if Tom Coughlin and Doug Marrone opt to try and protect the very quarterback they just spent all that money on in the offseason. Nick Foles is not a mobile quarterback, and with needs all over, the Jaguars bring in the fiery Jonah Williams to start at either left tackle or at a guard position.

8) - EDGE Josh Allen, Kentucky
- A bit of a fall down the board for Allen -- but it's not totally out of the realm of possibilities considering the depth of pass rushers in the first two rounds of the draft is quite good. The Lions spent a lot of money on Trey Flowers, but pairing him with Allen could have a significant yield for the Lions right away.

9) - TE TJ Hockenson, Iowa
- With Ed Oliver off the board early and Jonah Williams getting scooped up by Jacksonville, this pick came down to TJ Hockenson versus Washington State offensive tackle Andre Dillard. If the Bills were to pass on Hockenson in favor of Dillard, the likelihood is that they'd miss out on both Iowa's Noah Fant and Alabama's Irv Smith, Jr. at 40th overall, with both likely to be gone and no other tight end worth the selection. Then at 74th overall, the Bills would be picking more of a projection-based player to add to their tight end group, rather than an all-around asset like Hockenson. On the other hand, if the Bills passed on Dillard, the opportunity to find an offensive tackle in the second round would still be there -- because simply put, there are just more of them available in this draft. So, with two similarly-graded players in Hockenson and Dillard, the Bills take into account the depth of the position by making the young tight end the selection. And in Hockenson, they are getting a player that has the potential to make an instant impact. Spending a first-round selection on a tight end used to be a bit of a non-starter for NFL teams, but it's hard to ignore how advanced Hockenson is in a couple of areas. His blocking ability is far superior to any of the 'receiving' tight ends available in this draft, which turns him into a three-down player early in his career. As a receiver, Hockenson shows poise and technique in his route-running, along with an understanding of where to find the space -- and not to mention, the athleticism to make teams pay for losing track of him. I love Hockenson as a prospect, and for Brian Daboll's offensive scheme, I think he's a perfect fit and could quickly become the best tight end in the division now that Rob Gronkowski has retired.

10) - QB Drew Lock, Missouri
- I've had the Broncos moving down recently, but like the Giants, the Broncos can't ignore the quarterback position forever, right?

11) - LB Devin Bush, Michigan
- After ridding themselves of Vontaze Burfict, the Bengals are in need of an impact linebacker -- and the speedy Devin Bush can help in that area significantly.

12) **TRADE (from GB) - EDGE Montez Sweat, Mississippi State
- Not wanting to leave it up to chance with Miami sitting at 13, the Falcons dish out their extra fourth and fifth-round selections to move up to secure Montez Sweat. I would not be surprised to see Atlanta move up the board even higher than this on the actual day of the draft, either.

14) (from ATL) - WR Hollywood Brown, Oklahoma
- One of my standard picks over the last several mocks. Makes too much sense in my brain to go elsewhere.

15) **TRADE - OT Andre Dillard, Washington State
- Not wanting to wait around to see if Dillard would make it past both Carolina and the New York Giants, the Vikings make the move up to secure some much-needed protection for Kirk Cousins.

18) - QB Dwayne Haskins, Ohio State
- It's usually not good business practice to move down in order to take your quarterback, but with Carolina having their guy and the Giants taking theirs at sixth, Washington took the calculated risk to move down two additional slots and pick up a third-round selection for their trouble. Plus, they still get their quarterback.

20) **TRADE (from PIT) - T Cody Ford, Oklahoma
- Seeing the next three teams stacked up the way that they are with a need for offensive linemen, the Chargers secured a starting right tackle for Philip Rivers in what they hope will be a run to the Super Bowl in 2019.

40) - OT Tytus Howard, Alabama State
- After passing on Andre Dillard in the first round, the Buffalo Bills had the opportunity to choose from Washington's Kaleb McGary, Alabama State's Tytus Howard, and Kansas State's Dalton Risner with this selection -- and they opt for a player that has the potential to take over one of the tackle spots with the right coaching and seasoning. Many will look at Howard and think that he's too much of a project to take at this position, but with the traits that he shows and the fact that he's only played the position for a handful of years working in his favor, the hope around the league is that his potential is to be the best offensive tackle from this draft when all is said and done. Howard's background is unique, having been a high school quarterback, turned hopeful college walk-on tight end, before getting switched to the offensive line. You can see his athletic background in his footwork and fluidity, which combined with his long arms and 6-foot-5, 322-pound frame makes NFL teams think he could turn into something special. On the plus side for the Bills, Howard wouldn't be forced into the lineup immediately. They could continue to see about Dion Dawkins at left tackle, while the 33-year-old Ty Nsekhe plays right tackle for the time being as Howard learns from offensive line coach Bobby Johnson and offensive coordinator Brian Daboll.