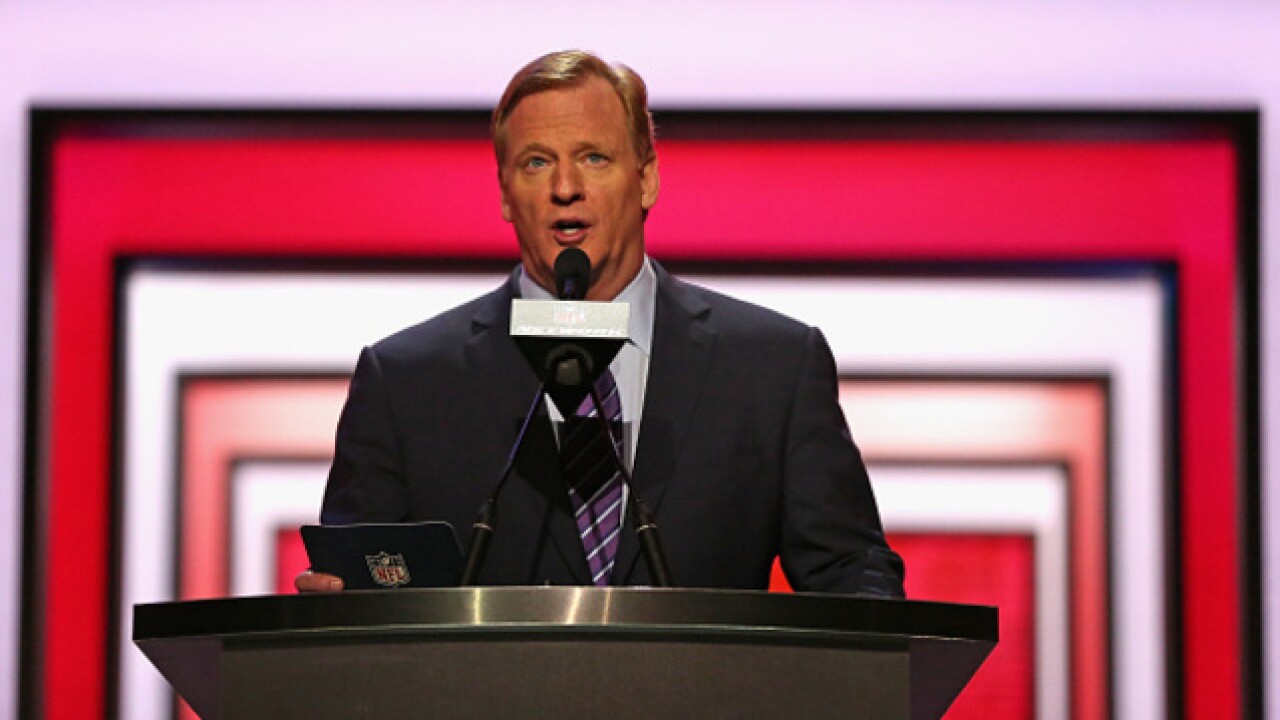 Copyright 2017 Scripps Media, Inc. All rights reserved. This material may not be published, broadcast, rewritten, or redistributed.
Jonathan Daniel
<p>CHICAGO, IL - APRIL 28: Roger Goodell announces a draft pick during the 2016 NFL Draft at the Auditorium Theater on April 28, 2016 in Chicago, Illinois. (Photo by Jonathan Daniel/Getty Images)</p>

We're now under one week away from the start of the 2018 NFL Draft, and the angling for quarterbacks can't be overstated. With players at the position likely to go with at least two of the top three selections -- if not all three -- will the Bills be left on the outside looking in on getting a franchise quarterback?

It's not the final mock draft by any means, but in this edition, we take it through the end of the first round. What do the Bills do?

My sixth, and second-to-last mock draft of the 2018 NFL offseason:

- The more time passes, the more this Josh Allen rumor starts to become more than just a rumor. As the days have gone here, more and more reputable NFL Draft analysts have connected Allen to the Browns, and the pairing of Browns GM John Dorsey with Allen makes a lot of sense based on his draft history, too. The Browns actually seem equipped to draft Allen, seeing as how they have a starting quarterback for 2018 in Tyrod Taylor so as to not force the issue with their young quarterback if they don't need to.

- If Allen goes first overall, this is the pivot point for the remainder of the Top 10. Giants GM Dave Gettleman would have a huge decision on his hands, whether to accept building for the future with Sam Darnold, or to try and trade down to build for the right now around Eli Manning. In this edition, I've got the Giants taking Darnold, although I'm not entirely convinced that they stay at two in this scenario. For the time being, Darnold goes to the Giants.

- As I wrote last time around, through the draft process a good rule of thumb is to trust the well-connected localized beat reporters, and that rings especially true with Manish Mehta of the New York Daily News. He's been connecting the Jets to Baker Mayfield for multiple weeks now, which leads me to believe that the Baker train will be headed to New Jersey.

- An incredible opportunity for the Cleveland Browns in the 2018 NFL Draft, able to land their top quarterback and the top non-quarterback on the board. By selecting Bradley Chubb, the Browns have one of the most talented pass-rushing duos in the league with he and Myles Garrett, and they have both under a rookie contract for the next three seasons, which is just a humongous advantage.

- This could be Saquon Barkley, but with the depth of this running back class I think the Denver Broncos, if they stay at fifth overall, would think long and hard about protecting their latest quarterback investment, Case Keenum. Here, they select Quenton Nelson, with the idea to strike for one of Ronald Jones, Sony Michel, Nick Chubb, or Rashaad Penny at 40th overall.

Head to Page 2 to see the trade details, the reasoning, and if the Bills wind up with another pick in Round One!

- After being frozen out of the top three quarterbacks, the Bills feel the time to strike for a potential franchise quarterback is now with Josh Rosen. Now outside of the top five, the Bills would have a great opportunity to move up without surrendering next year's first or second round selection. While perhaps the Bills would have preferred to trade up into the top three to select either USC's Sam Darnold or Wyoming's Josh Allen, Josh Rosen certainly is not just a consolation prize -- he's got great potential to be a top-flight quarterback in the NFL. His ability in the confines of the pocket, mixed with his accuracy, and the penchant to throw his receivers open against tight coverage makes him a wonderful quarterback prospect to build around. In the interim, he would battle with A.J. McCarron to be the starting quarterback in 2018, but the presence of the veteran means that the Bills wouldn't have to force him into the lineup if he isn't ready.

- The Buccaneers stand pat and land the top-rated running back in the 2018 NFL Draft, giving them yet another weapon on offense to make them all the more explosive with Jameis Winston at the helm.

- Even though they just traded out of sixth overall, I'm expecting the Colts to be quite active in this draft with the amount of second-round picks that they have. The Colts move back up to 8th overall, keep the 22nd pick that they just acquired from the Bills, and move ahead of the San Francisco 49ers to select the top linebacker in the 2018 NFL Draft. Considering all the draft resources they have, the cost here is minimal for the Colts to add an impact player.

- Missing out on Roquan Smith, the 49ers instead elect to take the top cornerback in this year's draft, which is a major position of need.

(from CIN via BUF through IND) - CB Jaire Alexander, Louisville

- If this trade actually happened, my what fun this would be for New Orleans and head coach Sean Payton. Drew Brees still has some game left, but this would give them a contingency plan to put in their holster for the next one-to-three years, bring him along slowly and make sure it's done the right way, and then when Brees is ready to call it a career, let Lamar Jackson loose on the NFL. It's a long-term plan, but Jackson, if harnessed with a creative offensive mind like Payton's, could become one of the most explosive quarterbacks in the entire league.

- The Seahawks desperately want to move down without a single selection in the second or third round of the 2018 NFL Draft. With all of the wide receivers on the board, the Falcons move up ahead of Dallas to give an explosive complementary option to Julio Jones for the next several seasons.

- With the first of two selections in the opening round, the New England Patriots take advantage of a falling Da'Ron Payne who could come in and be an impact starter along their defensive line right away.

- Perhaps you thought the Bills were done, but think again. The Bills use their pair of second-round picks and the fourth-round selection that they just acquired from Indianapolis to move back up in the first round, and strike for an incredibly talented linebacker before he's available to a number of teams that would like his services. The Bills take Leighton Vander Esch, teach him the position of middle linebacker in Sean McDermott's system, and then hope he becomes the explosive, coverage-friendly athletic linebacker that the Bills' defensive system craves at the middle linebacker position. He's the prototypical size, and although he's got some room to grow against the run, he has all the potential to become a long-term starter at a critical spot.