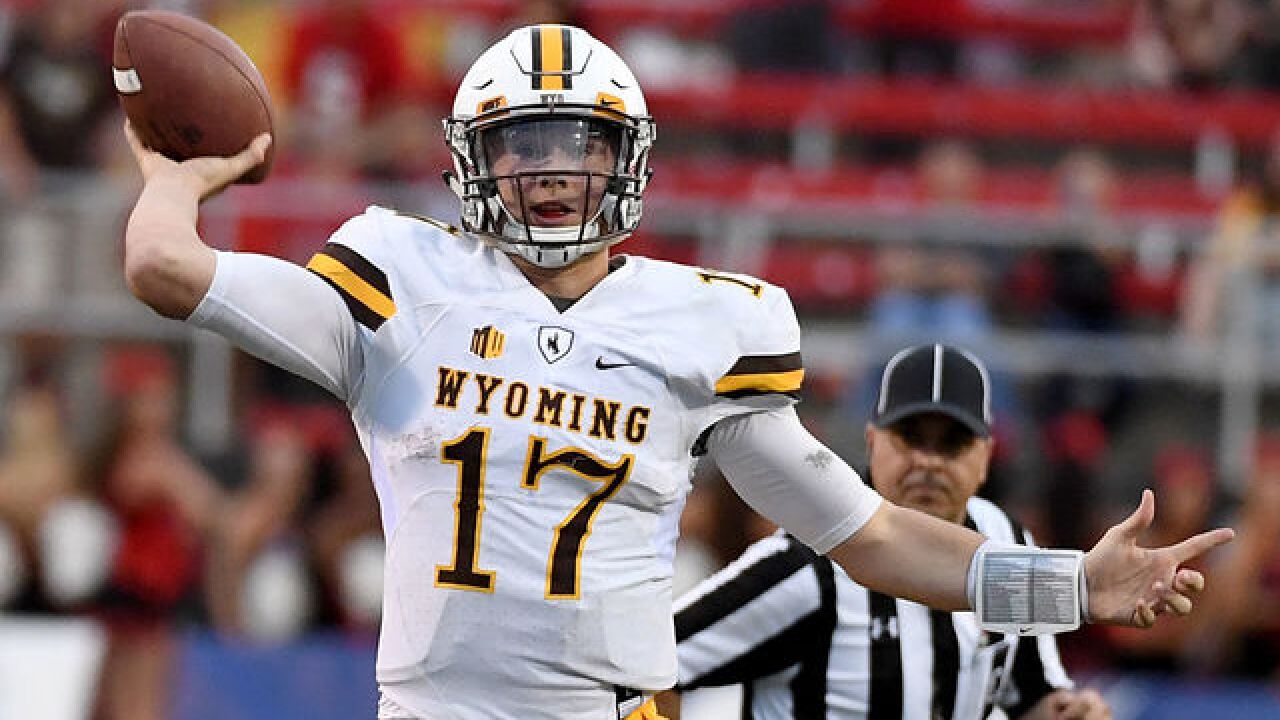 Two of the main events of the offseason, the NFL Scouting Combine and the beginning of the free agency period, are now both in the rearview mirror. As many teams around the league, including the Buffalo Bills, started to cross off the 'needs' on their potential draft list.

Further complicating things for the Buffalo Bills in their efforts to land a franchise quarterback, the New York Jets made the move up from sixth overall to third, so that way they could secure one of the top quarterbacks available in the 2018 NFL Draft.

Now, it's on the Bills. Do they make the trade up the board? How much will it take?

- A clean prospect that makes phenomenal throws, has tons of upside, and has a mobility aspect that makes you feel like a play is always alive. And, he doesn't even turn 21 until June. The Browns shouldn't pass up on a quarterback again -- especially in a draft rich with top flight prospects at the position.

- If the Giants are looking to select a quarterback at second overall, it makes little sense for them to move down the board and the Bills' next best hope would be to trade up to 4th overall with Cleveland. However, Giants GM Dave Gettleman certainly seems to be operating his offseason as though the Giants are in a win now mode with Eli Manning at the helm. And if you're Brandon Beane -- who worked under Gettleman in Carolina as his assistant general manager, you put it as plainly as this: "Dave, is a guard or a running back really worth giving up on five top 65 assets, and likely at least three, if not four other legitimate starters this season and the next?" For the Bills, this is a sticker shock type of trade, but not when you analyze what they have left at the end of it. This is what they've been preparing for over the past eight months. Outside of the first round, the Bills will still have 56th overall (second round), 96th overall (third round), 102nd overall (fourth round), 121st overall (fourth round), 166th overall (fifth round), and 187th overall (sixth round), which is basically a normal draft. And at the end of it all, they get their franchise quarterback to build around -- which is what is most important to the organization. For the Giants, they'll be left with six picks in the top 66 -- and an additional first round pick for 2019 on top of it all. As for the player himself, this is the second straight time I've mocked the Bills moving up to get Rosen because based on his ability as a pocket passer, his leadership -- because there are now multiple UCLA players that have gone to bat for him, and his accurate throwing, this seems like an incredible fit for a Bills team looking for an identity at quarterback. He's such a smooth passer with a great arm, goes through his reads, throws with anticipation, and puts his receivers in a position to make plays. The concerns with him are that he'll need to add some strength and that there's a lack of mobility, but if you have a player that wins from the pocket like him -- better than anyone else available in the draft, you feel like you're always in the game. There seems to be a lot of buzz around the Bills with Josh Allen, but my main hesitation is this: the Bills don't let any leaks out of their building now that Beane and head coach Sean McDermott are in charge... what motivation would they have to tell anyone -- heck, even people inside their own building -- about the biggest potential decision that defines their tenure with the organization? So, basing it off my own film study and what Brandon Beane values most in quarterbacks, I think Rosen is the strongest fit. We've still got a long time between now and then, though.

(Be sure to head to Page 2 for the Bills 2nd round pick!)

- They have short-term quarterbacks in Josh McCown and Teddy Bridgewater on the roster on one-year deals, which affords them the opportunity to sit Josh Allen in 2018 and then move on to Allen in 2019 in the hopes that his big arm and huge skill-set becomes the next great thing in quarterbacks in the New York City/New Jersey area.

- Now this would truly be something -- three AFC East teams, all starving for a quarterback to take on Tom Brady and the New England Patriots in what is seemingly at most his last few years, all trading up for a quarterback to take them into the future. I absolutely love the fit of Baker Mayfield with Adam Gase, a bright and creative offensive mind in the NFL that could definitely maximize his skill-set. Seeing that the quarterbacks went 1, 2, and 3... the Dolphins enter the derby rather than waiting around and letting Denver take someone it seems they really like.

- On the outside looking in on the quarterback race for the perceived top four, the Broncos get a top flight guard to protect Case Keenum and will look to the second round to address quarterback.

- So, after adding two more first round picks for this year and next, and the top pick in the third round, the Giants flip the second round pick they got from the Bills to move up ahead of Tampa Bay in order to select Saquon Barkley. They maximized their value for second overall by adding massive draft capital, brought in perhaps the best non-quarterback in the draft, and still have 22nd overall coming back around. If you get over the fact that they passed on a quarterback with Eli Manning still over the helm, a pretty good haul for them -- and they're in the 2019 first-round quarterback derby with two lottery tickets.

- They would have liked to have landed Barkley, but bringing in Chubb to pair with Vinny Curry at defensive end will be a nice parting gift.

- It might not be a fit based on how teams normally arm their linebackers, but Derwin James has all the ability to be a potential game changer.

- Sensing that they'd likely be on the outside looking in on Payne down at 25th overall, they move up to select the extremely versatile and impressive defensive tackle from Alabama. Seattle, without having a second or third round pick and carrying plenty of needs, is a natural team to watch moving down in the first round -- maybe even a couple of times.

- Evans likely would have been in consideration for the Bills with one of their two first round picks had they be unable to move up the board, but the Giants bring him as part of the Bills' trade to move up and land Josh Rosen.

- Following their second trade-down the board, The Colts decide to package their top second-round pick, and their third round selection to move up and grab the best remaining offensive tackle on the board to protect Andrew Luck. McGlinchey being a Notre Dame grad makes it even sweeter for fans in the state. Seattle moves down yet again, and leaves the first round with three picks on Day Two.

- This might be a little bit of a panic move for Denver, but they might not have another choice. They were unable to land Kirk Cousins in free agency and instead signed Case Keenum -- who still carries a lot of questions as a starter into next season. In the NFL Draft -- in this version anyway, they saw three other teams leapfrog them into the Top 4 to land their quarterback. So, with New Orleans, Pittsburgh, and Jacksonville all on deck and with them needing to think about selecting a quarterback as well, John Elway moves up, ditches his third round pick, and brings Mason Rudolph in to mold while Keenum starts in 2018. It also gives Denver the potential fifth-year option since Rudolph was selected in the first round.

- With the cornerback room needing a complete overhaul following the offseason purge, they get a potential perfect fit for their defense in Josh Jackson.

- Matt Ryan has a potentially dynamite slot receiver on his hands in Christian Kirk, and that could make the Falcons a dangerous offense yet again in 2018.

- In need of help up the middle of their defense, the run-stuffing Phillips can come in and help immediately.

- Now, some might look at this pick as a bit of a stretch as to where they selected him. However, when you read his background and skill-set, you realize that this is a Sean McDermott "process" guy through and through. From Lance Zierlein of NFL.com:

"Jewell wasn't considered an elite recruit despite earning all-state honors (football and baseball) while growing up on a farm in Decorah, Iowa. The Hawkeyes ignored his average measurable to rip him away from Division III Luther College (located in Decorah)."

Oh, and not to mention that Jewell is the only player that Iowa head coach Kirk Ferentz, since he took over the program in 1999, has named a permanent captain as a sophomore. Yes, folks, all of those factors has McDermott written all over it. How does he adapt to the Bills' scheme? He would line up at middle linebacker, and while he doesn't have a super quick 40-time, he anticipates incredibly well both against the run and the pass -- and that was something that was sorely lacking at the middle linebacker spot in 2017. Also remember this, draft analysts considered Matt Milano to be a bit of a reach in the fifth-round last year, and he's turned into an impact player and potential long-term starter at the weakside linebacker position in Buffalo. When McDermott sees the traits he likes in defenders, he strikes. Instincts are key at linebacker in McDermott's scheme, that much is clear. And with how important the middle linebacker spot is to the Bills, I wouldn't doubt them making it a priority -- especially if they trade away a lot of picks to go get their quarterback.