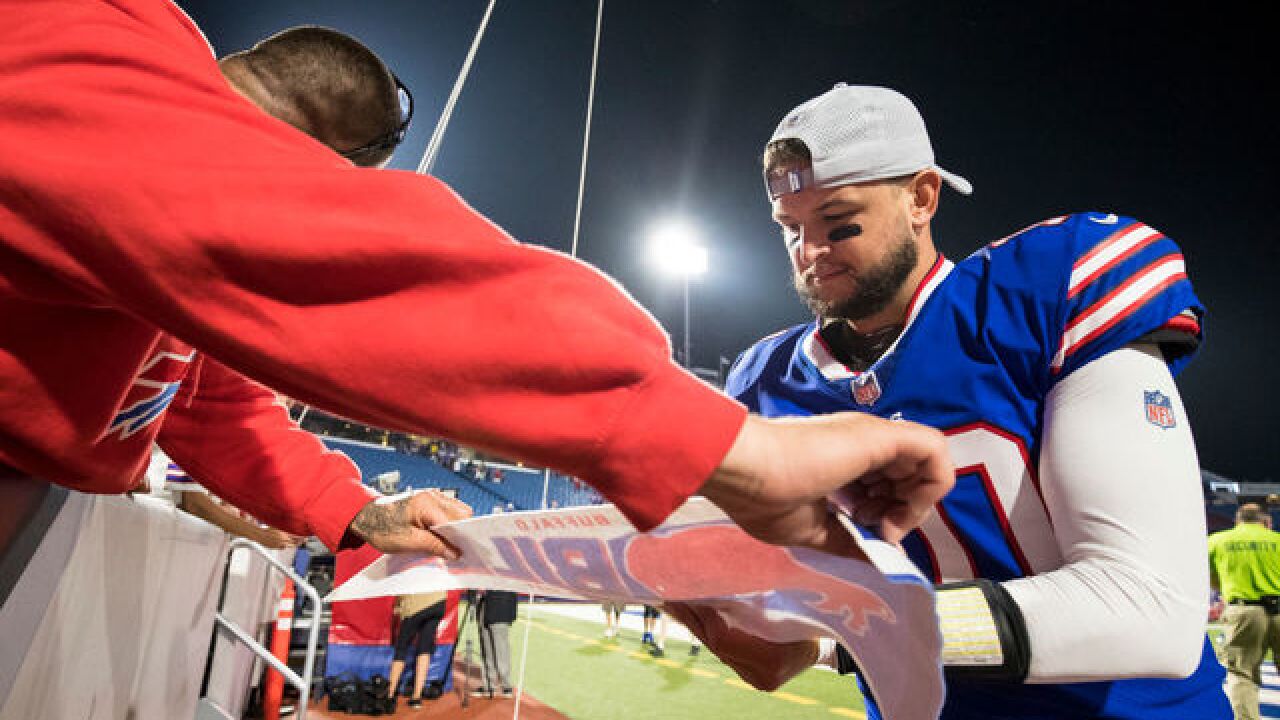 Copyright 2018 Scripps Media, Inc. All rights reserved. This material may not be published, broadcast, rewritten, or redistributed.
Brett Carlsen
<p>ORCHARD PARK, NY - AUGUST 09: AJ McCarron #10 of the Buffalo Bills signs an autograph after the game against the Carolina Panthers at New Era Field on August 9, 2018 in Orchard Park, New York. Carolina defeats Buffalo in the preseason game 28-23. (Photo by Brett Carlsen/Getty Images)</p>

And with that, the preseason is over for the Buffalo Bills. The Bills did their best to see what they had at the bottom of the roster, to give one more chance to those players to try and snare a spot on the 53-man roster.

And by did their best, I mean they rested 36 of their core players to do just that and to keep the players that will be the most important to them in 2018 healthy and ready to play in Week One.

After the vast majority of Bills games, I post my 'Seven observations' column except for one game every year -- the fourth preseason game. Rather than picking and choosing positions, instead we've got every single spot discussed and previewed heading into cutdown day on Saturday at 4:00 pm.

So, for one last time before cutdown day, my final guess at the 53-man roster for the 2018 Buffalo Bills:

Quarterback (3)
Nathan Peterman, Josh Allen, AJ McCarron
- AJ McCarron was one of the last players I included on the 53-man roster, and I think there is one reason to hang on to him at this point: to trade him. He is clearly behind both Nathan Peterman and Josh Allen in the quarterback rankings, and I would not be surprised if the Bills either try to move him in the suddenly hot backup quarterback market or wind up releasing him entirely if they don't get a deal for him.  I'd imagine Brandon Beane makes quite a few calls over the next two days about interest in McCarron.
Cut: None... for now.

Running Back (5)
LeSean McCoy, Chris Ivory, Marcus Murphy, Taiwan Jones, Patrick DiMarco
- It was pretty easy to predict the running back group for the 53-man roster based on the pregame workout club way ahead of the game against the Bears. All five players listed above worked out and didn't touch the field in the preseason game. LeSean McCoy will be the lead, Chris Ivory the primary backup, Marcus Murphy the change of pace, Taiwan Jones the special teams threat, and Patrick DiMarco the fullback. I don't think the Bills gave any serious consideration to Travaris Cadet, Keith Ford, and Sam Rogers once the first three preseason games concluded.
Cut: Travaris Cadet, Keith Ford, Sam Rogers

Wide Receiver (6)
Kelvin Benjamin, Zay Jones, Jeremy Kerley, Andre Holmes, Corey Coleman, Ray-Ray McCloud
- The wide receiver group came down to whether or not Corey Coleman and Ray-Ray McCloud would be on the roster. Ultimately, I have the Bills keeping both because they provide the Bills with something unique. Coleman is a speed threat, and they'll hope that the offense slows down for him -- and if it doesn't, I wouldn't be surprised to see them move on at some point down the line. As for McCloud, he's a returner that shows some flashes, and he'll likely be an inactive player on game days. Past them, the final two cuts were Rod Streater and Kaelin Clay, but neither show enough on special teams to warrant the Bills hanging on to them. The Bills ruled Cam Phillips, Robert Foster, Malachi Dupre, and Austin Proehl out a long time ago.
Cut: Rod Streater, Brandon Reilly, Kaelin Clay, Cam Phillips, Robert Foster, Malachi Dupre, Austin Proehl

Tight End (4)
Charles Clay, Jason Croom, Khari Lee, Nick O'Leary
- Coming into the fourth preseason game, the Bills had three guys vying for two spots in Khari Lee, Nick O'Leary, and Logan Thomas. Ultimately, I had Logan Thomas on the outside looking in because of the presence of Jason Croom. The Bills found their young, athletic tight end to develop behind Charles Clay which means they need some players that can block in those two tight end sets. Lee is the best at that, and O'Leary has the edge over Thomas in that department, while still keeping some ability in the passing offense. O'Leary also responded in a big way when his roster life was on the line a pair of weeks ago. The worry for Thomas started in the third preseason game when he was on the field at the end of the game, well after the top four got their reps. Lee and O'Leary aren't in the clear, but they carry just a bit more in my mind than Thomas.
Cut: Logan Thomas, Keith Towbridge

Offensive Tackle (3)
Dion Dawkins, Jordan Mills, Marshall Newhouse
- This race came down to De'Ondre Wesley versus Marshall Newhouse, and I was close to giving the roster spot to the younger player with more upside and fewer penalties in the preseason. In the end, I ultimately went with the veteran Newhouse because that I don't think the Bills will ignore that factor. Plus, the Bills pulled Newhouse pretty early into the game and Wesley played right to the end. Now, if the Bills were to cut Newhouse, they would save $1.25 million on the 2018 salary cap, so I think they'll probably be active on the waiver wire looking for an offensive tackle. For now, Newhouse sticks and Juan Castillo-favorite Conor McDermott gets earmarked for the practice squad.
Cut: De'Ondre Wesley, Conor McDermott, Mo Porter

Interior Offensive Line (5)
Ryan Groy, Vlad Ducasse, John Miller, Russel Bodine, Wyatt Teller
- The Bills likely will give some consideration to Ike Boettger to make the 53-man roster, but they'll probably just run out of room for the undrafted rookie. They'll hope to get him on their practice squad. He'll be one of their priorities in that respect. The rest of the group is an open-and-shut case from a Bills' perspective.
Cut: Ike Boettger, Adam Redmond, Josh James, Gerhard de Beer

Defensive End (4)
Jerry Hughes, Trent Murphy, Shaq Lawson, Eddie Yarbrough
- The only question at defensive end heading into Thursday was if undrafted rookie Mike Love could win a spot, but his weaknesses in run defense on multiple occasions keep him on the outside looking in. He'll be a prime practice squad candidate, however. The rest of the group is as you'd expect.
Cut: Mike Love, Terrence Fede, Ryan Russell, Mat Boesen

Defensive Tackle (4)
Kyle Williams, Star Lotulelei, Harrison Phillips, Adolphus Washington
- Even though his roster spot was on somewhat shaky ground, defensive tackle Adolphus Washington did just enough to warrant the Bills hanging on to him once again. He made a flash play early against the Bears, and those are the types of efforts that keep coaches and GMs hanging on and hoping for more. I gave some consideration to Tyrunn Walker due to the Kyle Williams injury, but it seems like from the veteran's activity level during practices on the sideline lately, the Bills will be able to get by if they have to start the year without him. The Bills can always use Shaq Lawson at defensive tackle if they get in a bind.
Cut: Tyrunn Walker, Rickey Hatley, Albert Havili

Linebacker (6)
Tremaine Edmunds, Matt Milano, Lorenzo Alexander, Ramon Humber, Julian Stanford, Deon Lacey
- Even though Julian Stanford suffered a nose injury that has him "week-to-week," the Bills have enough depth at linebacker to stay afloat in the event of an injury to starting middle linebacker Tremaine Edmunds. Tanner Vallejo was the only other hopeful for this group, but there is some work to do with him in the background -- and still with practice squad eligibility, the Bills would probably feel strongly about his ability to clear waivers and get back to them.
Cut: Tanner Vallejo, Xavier Woodson-Luster, Corey Thompson

Cornerback (5)
Tre'Davious White, Vontae Davis, Phillip Gaines, Taron Johnson, Breon Borders
- I'll be honest; it's a flip of the coin on which player to keep as the fifth cornerback. It comes down to Lafayette Pitts and Breon Borders, with it all depending on what the Bills value more with their fifth cornerback. If they want someone that's better defensively that can still give them a little bit on special teams, Borders is the guy. If they want to sacrifice defensive performance for a more natural special teams coverage guy, Pitts is the way to go. Because Borders can do a bit of both, I've got him sneaking on to the roster with one of the final spots. His interception in the fourth quarter cinched the spot. As for Levi Wallace, he has practice squad written all over him. The Bills may look to upgrade cornerback on the waiver wire over the weekend.
Cut: Lafayette Pitts, Levi Wallace, Ryan Carter

Safety (5)
Micah Hyde, Jordan Poyer, Rafael Bush, Dean Marlowe, Siran Neal
- With the lack of production at other positions, it provides the Bills with an ability to keep five safeties and feel comfortable with their decision. The top three of Micah Hyde, Jordan Poyer, and Rafael Bush are set in stone. Dean Marlowe sneaks in as the fourth safety, and Siran Neal will join Ray-Ray McCloud on the active roster redshirt squad. I don't think GM Brandon Beane wants to cut more than one of his draft picks, and that one is already Austin Proehl. Neal sticks because he shows some speed and potential, but he's got a long way to go.
Cut: Kelcie McCray

Special Teams (3)
Stephen Hauschka, Reid Ferguson, Colton Schmidt
- The battle of the punters goes to Colton Schmidt. In the punt-off, Jon Ryan only had one punt to compare against the Bears -- an opportunity to coffin corner the Bears deep in their zone, and instead, he airmailed the punt about 8 yards past the goal line. Combine that with Schmidt's 49-yard punt that pinned the Bears on their two-yard line, and voila, the decision made itself.
Cut: Jon Ryan

Ten for the practice squad
RB Keith Ford
WR Brandon Reilly
WR Robert Foster
OT Conor McDermott
G Ike Boettger
C Adam Redmond
DE Mike Love
DT Rickey Hatley
LB Tanner Vallejo
CB Levi Wallace
- Keep in mind the Bills don't have to keep ten of their own for the practice squad. They'll likely dip into the free agency pool from elsewhere to round out their practice group, but these are the names that they could see some potential with hanging on to for the beginning of the year.