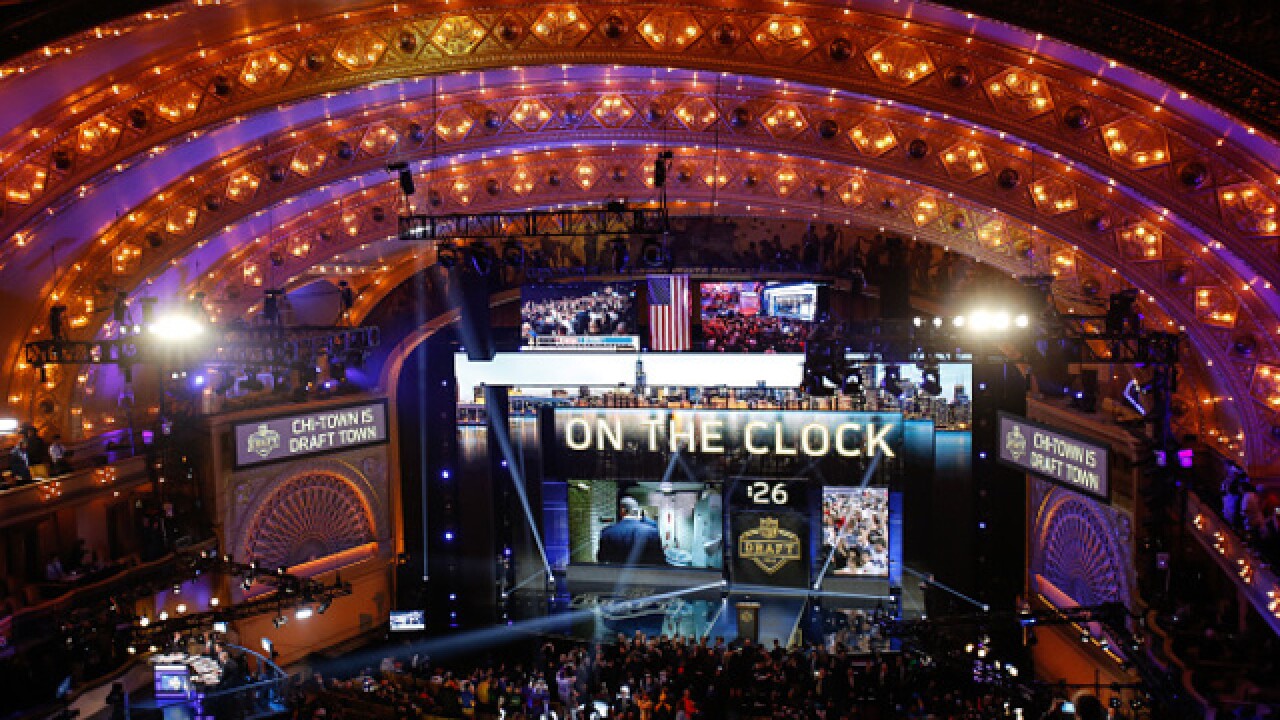 Kena Krutsinger
<p>CHICAGO, IL - APRIL 30: A general view prior to the start of the first round of the 2015 NFL Draft at the Auditorium Theatre of Roosevelt University on April 30, 2015 in Chicago, Illinois. (Photo by Kena Krutsinger/Getty Images)</p>

The day we've all been waiting for is finally here.

Thursday marks the start of the first day of the 2016 NFL Draft, and the Buffalo Bills will be hoping that one of their main targets makes it down all the way to the 19th overall selection.

How will it all shake out? A look at the first two rounds going up to the Bills pick, and then a full draft look at what the Bills could be looking at throughout the next three days:

- When it's all said and done, the California kid stays in California for the rebirth of the Los Angeles Rams.

- Give Carson Wentz just a little bit of time on the sidelines to learn the pro game, and then the Eagles could have a special one on their hands.

- The motivation for this trade is fairly simple: the Chargers could really use someone like Jalen Ramsey for their roster, but have other players that they really like as well. Dallas loves Ramsey, and has been linked to him more than any other team. They are also armed with two fourth-round picks and four sixth-round picks this year, so they use one of each to get the guy they covet most.

- The Ronnie Stanley hype has been gaining steam for over the past week, and with such a huge need at offensive tackle, I think the Chargers wouldn't hesitate in pulling the trigger on him here.

- If Ezekiel Elliott gets past Dallas, that's when it starts to become more of a possibility for Miami to jump up. Jacksonville is likely trying to get out of the fifth overall pick, and rather than wait around to see if Baltimore (6) or Cleveland (8) takes him, the Dolphins move way up to assure themselves of the player they covet.

- The Ravens are getting old at edge rusher and need an infusion of youth, so they get the most well-rounded prospect of them all in Joey Bosa.

- There is at least some temptation to take Paxton Lynch here, but DeForest Buckner safely finding his way down to seventh overall at a major position of need, and into the hands of former Oregon coach Chip Kelly, that's the temptation that they'll be unable to resist.

- If you've been tracking mock drafts for months now, this is a bit of a surprise. However, one big name always falls down the list, and the Chargers seeming preference of Ronnie Stanley could mean a mini-tumble for Laremy Tunsil. Drafting him would give them an immediate right tackle, and if they wanted to move Joe Thomas for additional resources, they could.

- Feeling the heat with some offensive tackle-hungry teams, the Titans make the move up to land Jack Conklin to start at right tackle this season. The best part for them, they still have two second-round picks to work with.

- Leonard Floyd over Myles Jack here? Floyd provides that pass rushing threat and tremendous versatility as a linebacker as well. That, and his long-term health, gives him the edge over Jack.

- The Bears need someone on either the defensive line or a pass-rushing outside linebacker. They'd prefer the latter, and take the hard-working Shaq Lawson.

- At long last, Paxton Lynch finds himself a home and he doesn't have to worry about playing right away, either. Lynch learns from one of the best, and much like the Green Bay Packers did somewhat near the end of Brett Favre's tenure with the team, they get a quarterback to groom for extended success into the future.

- In this scenario, the Jaguars move down from fifth overall, acquire an additional second and fourth-round pick, and get the guy that they probably would have taken had it not been for all the concerns with his knee. As Michael Scott would say, that's a "win-win-win" situation.

- This is a big pick for the Bills' draft hopes and dreams. The Raiders are in the market for a linebacker or an edge rusher, but getting the top cornerback is a big need as well.

- Rankins is a player the Bills really like, and if he's on the board at 19 he's a heavy consideration. The trouble is, he probably won't be there. With Tampa Bay, he slots in right next to Gerald McCoy.

- Offensive or defensive line, that is the question for the Lions. However, with a mid-second round pick and a steep drop-off in talent at offensive tackle around that time, the Lions trust that they can find a defensive tackle later on.

- This is another pick that's quite important for the Bills. They have been linked to linebackers of all kinds, but an edge rusher (despite taking Vic Beasley) remains a huge need. NFL types seem to think Kevin Dodd has tremendous upside, so the Falcons go for a higher value position.

- An offensive lineman is also a consideration here, but Billings could be incredibly disruptive in the middle of the Colts' 3-4 defense. I've loved this pick and this fit for quite some time for both sides.

- And here it is, the Bills land the guy they've had an eye on throughout the draft process. They also really like Shaq Lawson, Sheldon Rankins, Jarran Reed, and even the hard-hitting safety Karl Joseph. However, with a crying need at weakside linebacker and not a lot of depth to the draft class, Lee would come in and be a three-down player immediately for the Bills. Lee is super athletic and has the ability in coverage that the Bills are looking for -- and the type of ability that fits well into Rex Ryan's defensive scheme. Despite the interest in Jarran Reed, defensive line is a deep class and one they can wait on in the second round. If they do miss out on all three of Lawson, Rankins, and Lee, I could certainly see them trading down and taking a defensive lineman, or Karl Joseph with their first pick in the late first round or early second round. It's a fluid situation, but they love Darron Lee.

- The Jets go for an edge rusher that they so desperately need, and Correa reportedly has a lot of fans in the first round. Personally, I like Noah Spence quite a bit more, but Correa can also offer some versatility to 3-4 teams like the Jets.

- The Vikings swing for the fences with Robert Nkemdiche, as Mike Zimmer hopes he can motivate him enough to use all the ability that he has and become a potential Pro Bowl player.

- The Titans are on the move... again. With William Jackson still available, the Titans move past some teams with need at cornerback to pick up a potential first-year starter -- and they still keep a second-round pick in the process.

- I love this fit for a lot of reasons, and I think he could be a star in that Carolina defense. They need some a cornerback, but they should be able to find one in the second round.

- At the end of the day, Connor Cook just misses the first round and becomes Hue Jackson's project quarterback over the 2016 season. Cook might even push for the starting job at some point, but the Browns will probably want to build up their team first before letting him see the light of day. And, if he doesn't have it, it's only a second-round pick and they can still take a first-round quarterback in 2017.

- Hackenberg misses the first round barely, and lands in an ideal situation to sit and learn behind Tony Romo.

- A bit of a surprise pick here, but Prescott has the type of movement ability that Chip Kelly featured routinely at Oregon, but never found that player in Philadelphia. If they trade Kaepernick, Prescott might even start this season.

- The Giants get a second wide receiver to pair with Odell Beckham, Jr., and they find Will Fuller here with great value in the second round.

- The slide ends here for Robinson, but he lands with a 3-4 team that he can start for immediately. It's a great fit for both sides.

- A hybrid player in a hybrid league, some team will hope Cravens can do a little bit of everything -- much like Deonne Bucannon of Arizona.

- With the second wave of quarterbacks gone, the Bills take a player in Bronson Kaufusi who screams "versatility" -- and that's just what they're after. Kaufusi can rush the passer, he can play five-technique defensive end, he can play a little outside linebacker in the Manny Lawson role that they have set up... he can do a little bit of everything. He's a bit of an older prospect (turning 25), but is seemingly one who can contribute right away. He plays a bit too high at times, but the combination of size (6-foot-6, 285-pounds), length, strength, speed, and movement ability makes him a great addition. And, the Bills are interested in him, having had him in for a pre-draft visit. See for yourself:

- I continue to believe that the third round is the sweet spot for the Bills to take a quarterback, and with Dak Prescott off the board, it comes down to two players: Cardale Jones and Kevin Hogan. Of the two, one is swinging for the fences, and the other is safe. However, they really like both of those players, and of the choice between the two, I believe the normally big-swinging Doug Whaley will opt for Cardale Jones if given the opportunity. It's the perfect situation for Jones, who doesn't even have to be a backup this season. Let him learn, let him grow, and re-assess the situation in 2017. A 6-foot-5, 253-pound quarterback should not be able to move like this:

- I absolutely love the idea of Joe Schobert in Rex Ryan's defense. He would normally be an inside linebacker, but he played outside linebacker/edge rusher at Wisconsin quite a bit. At best, he can develop into an asset on the defense and provide depth where it's sorely needed. At worst, he can be one of the better special teams players the Bills have -- and they need to replenish. A former walk-on player at Wisconsin, and I firmly believes that walk-on's never forget that feeling.

- The Bills need to add something to the wide receiver position, and so they go for Josh Doctson's running mate Kolby Listenbee, whom they had in for a visit. His speed stands out the most, as does his ability to win contested catches. He needs to get stronger, but he's got some potential.

- A long, lanky cornerback with great athleticism, Hall likely best projects as a hybrid corner/safety, or as just a regular safety. He would come in and compete for a roster spot with Duke Williams, Jonathan Meeks, and company.

- There isn't a ton of versatility to Murphy along the offensive line, which is why he drops down a bit. However, he's quite familiar with the Greg Roman style of offensive line play, and, could provide some depth at offensive tackle should they need to go down that far. He's likely best fit at right tackle. Here he is at left tackle at Stanford, up against likely Top 10 pick DeForest Buckner, and doing just enough to help his team get the first down: