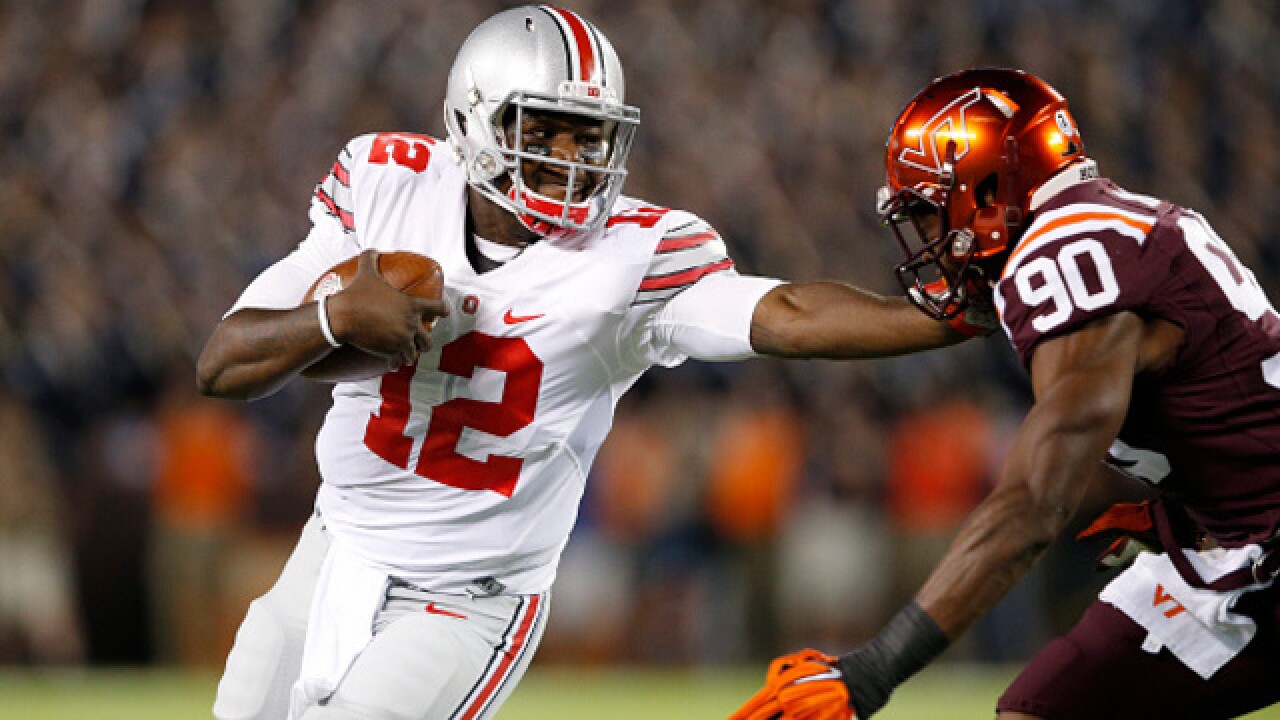 Joe Robbins
<p>BLACKSBURG, VA - SEPTEMBER 7: Cardale Jones #12 of the Ohio State Buckeyes tries to run the ball past Dadi L'homme Nicolas #90 of the Virginia Tech Hokies in the first quarter at Lane Stadium on September 7, 2015 in Blacksburg, Virginia. (Photo by Joe Robbins/Getty Images)</p>

We're getting close to the home stretch before the 2016 NFL Draft kicks off. The annual selection meeting will take place two weeks from Thursday, and the rumors are flying around at a torrid pace.

Since it's within reach, it's time to step up the mock draft game a bit, too. The Buffalo Bills are hoping to add quite a bit of impact talent to their roster, and a quarterback along with it all. In today's version of the mock draft, that means we're taking it all the way to the third round.

What might the Bills be looking at through the first three rounds? A look at how it could all play out:

- Lock it in unless there is a team that puts together a good enough package to move up and select a quarterback.

- Last mock draft was the first time I put Goff in this spot ahead of Carson Wentz, and everything that has come out this week has been of the Goff-to-Cleveland variety. Of course, with the draft, that could mean the complete opposite this time around. For now, I'll stick with Goff.

- With Carson Wentz being the apple of the Eagles' eye, they move up to get him -- Sam Bradford contract be damned. It's a really beneficial landing spot for Wentz, who won't feel the pressure to play immediately and can learn from a former quarterback, and a successful offensive coordinator in Eagles head coach Doug Pederson.

- Missing out on the top two quarterbacks, they get the player that is rumored to be on the top of their board. Ramsey could take over at cornerback straight away.

- The Jaguars need help at all of linebacker, coverage, and getting after the quarterback... and Myles Jack checks all three boxes. They could go for the pass rusher in Joey Bosa, but the versatile Jack can be a defensive weapon for Gus Bradley.

- This doesn't seem like a Baltimore Ravens type of pick, but many believe Ezekiel Elliott is a bit of an outlier for his position, and the Ravens can add instant impact to their offense in the hopes of a successful return to the postseason.

- Paxton Lynch is a consideration here, but the 49ers opt for a potential impact edge rusher, a position in which San Francisco is one of the worst in the league.

- The Chargers moved down five spots with a nice little care package of picks hoping it landed them squarely in the right value to take an offensive tackle, but then DeForest Buckner was sitting right there for the taking. The Chargers go best player available and add an immediate starter to the defensive line.

- Ryan Fitzpatrick remains unsigned, and even if they do bring him in, the Jets have to begin thinking about life after the 33-year-old quarterback. The Jets make the move into the top 10 to assure themselves one of the top three signal callers in the draft. A combination of Lynch and Chan Gailey would be quite a potent combination if he's brought along the right way.

- A bit of a surprise pick here, but the Giants could use help at linebacker and with pressure off the edge, and Floyd can do a bit of both.

- Miami stands pat and lands the top cornerback in the draft, and he's from the same state. That's an easy sell to Dolphins fans.

- Surprise! It's not Laquon Treadwell that's the first wide receiver off the board. Will Fuller has been gaining some steam in draft circles, and with the Rams missing out on the top three quarterbacks, they get the top wideout on their board.

- The Indianapolis Colts need impact at some place on the defense, and they look at Billings as someone that can not only step right in and start, but someone that can grow to be one of the best at his position. The strength and athleticism for a player his size is tough to beat.

- This is a homerun selection for the Bills. It crosses off an immediate need by adding a starting defensive end that can play both there, and on the inside of a four-man front as a defensive tackle. Rankins, in a word, is explosive as an athlete. As a 6-foot-1, 299-pound player, Rankins registered a 34.5-inch vertical jump, the second-best for defensive tackles, and a 118-inch broad jump -- the top mark for players at his position. Why are those important? It shows just how disruptive Rankins can be by generating enough speed and power in his lower half to give blockers a tough time. Despite his smaller frame, he's quite good against the run, and can get after the passer as well as anyone from an interior line position.

- The Texans need speed to take advantage of Brock Osweiler's big arm, and Coleman provides that far more than Laquon Treadwell would.

- The Broncos waited as long as they could before feeling the pressure to move up and select Connor Cook, who could compete for the starting job as early as this season. It's a relatively small cost of a third-round pick, considering that they have a compensatory selection just a few picks later, and because of the position that Cook plays.

- The Cardinals go for Vernon Butler, who although raw, they hope can turn into the Muhammad Wilkerson comparisons he's been getting in the pre-draft process.

- Le'Raven Clark is an athletic left tackle with great size, quick feet, and long arms. No matter how unpolished he might be, that player will always go much higher than his film would indicate. More of a long-term pick, but he can develop into a really good one.

- With this selection, the Rams will have a nightmarish trio of quarterbacks to choose from in Hackenberg, Case Keenum, and Nick Foles. They'll hope that a Jeff Fisher-Christian Hackenberg marriage can bring some fireworks and wins to Los Angeles in the first season.

- Lawson falls out of the first round which is a bit of a surprise, but it seems that the pass rushing group this year isn't one that many believe is relatively strong. Despite that, the Ravens will gladly scoop Lawson up in the second round if he gets there.

- The Jaguars get a safety with first-round talent in Karl Joseph, and pairing him with Myles Jack in this draft already has Gus Bradley pumping his fist.

- Spence falls down into the 40's, but keep an eye on him. He can become one of the biggest impact players of the draft if he lands in the right system. If he lasts all the way to 49, perhaps he's a consideration for the Bills.

- In need of an edge rusher, the Browns bring in Correa who could do that and even play on the inside, too.

- Apologies, Bills fans that had their heart set on Smith in the second round. The Colts need the inside linebacker help and pull the trigger on a long-term bet that he'll once again be a great player. This is quite reminiscent of the Da'Quan Bowers situation in 2011, who ended up going 51st overall in that draft.

- This pick came down to four players: Cravens, Florida safety Keanu Neal, Ohio State linebacker Joshua Perry, and LSU linebacker Deion Jones. In the end, I landed on Cravens because of the type of versatility he could bring to Rex Ryan's defense. You can envision a specific role for Cravens in Ryan's defense, who has the ability to cover, sniff out plays with his instincts, and even provide heat on the passer when called on to blitz. He'll be a hybrid player, and the Bills could certainly use one of those to cover tight ends and running backs alike. Although, if the board played out this way, Neal and Jones would be intriguing options as well, while Perry could take over for Manny Lawson after 2016.

- The 49ers neglected taking a quarterback in the first two rounds for more immediate players, and Chip Kelly takes on Dak Prescott as his newest project at quarterback.

- Some of you are going to love this pick, and plenty of you will end up hating it, too. Cardale Jones is one of those prospects that everyone has an opinion on because of his story at Ohio State. He's got everything you want as a 6-foot-5, 253-pound quarterback prospect from a size, speed, and raw skills standpoint -- and most important, the Bills are clearly interested. Jones has one of the biggest and strongest arms in the draft. The trouble is, his accuracy is not where it needs to be at this point, making him a major project. However, in the right situation and with the right people coaching him, Jones could develop into something.

Some detractors will liken him to EJ Manuel, and while the two do have some similarities like many prospects do, there are key differences. Among them, Jones doesn't play anywhere near as hesitantly as Manuel does, and did at his time of Florida State. The other key difference, the situation is completely different for Jones than it was Manuel. Jones would be working in an essential redshirt season with quarterbacks coach David Lee, who is noted for his work with players and their mechanics. He would also be learning from Greg Roman, who has gotten as much from the quarterbacks he's coached (Tyrod Taylor, Colin Kaepernick, and Alex Smith) as anyone else has.