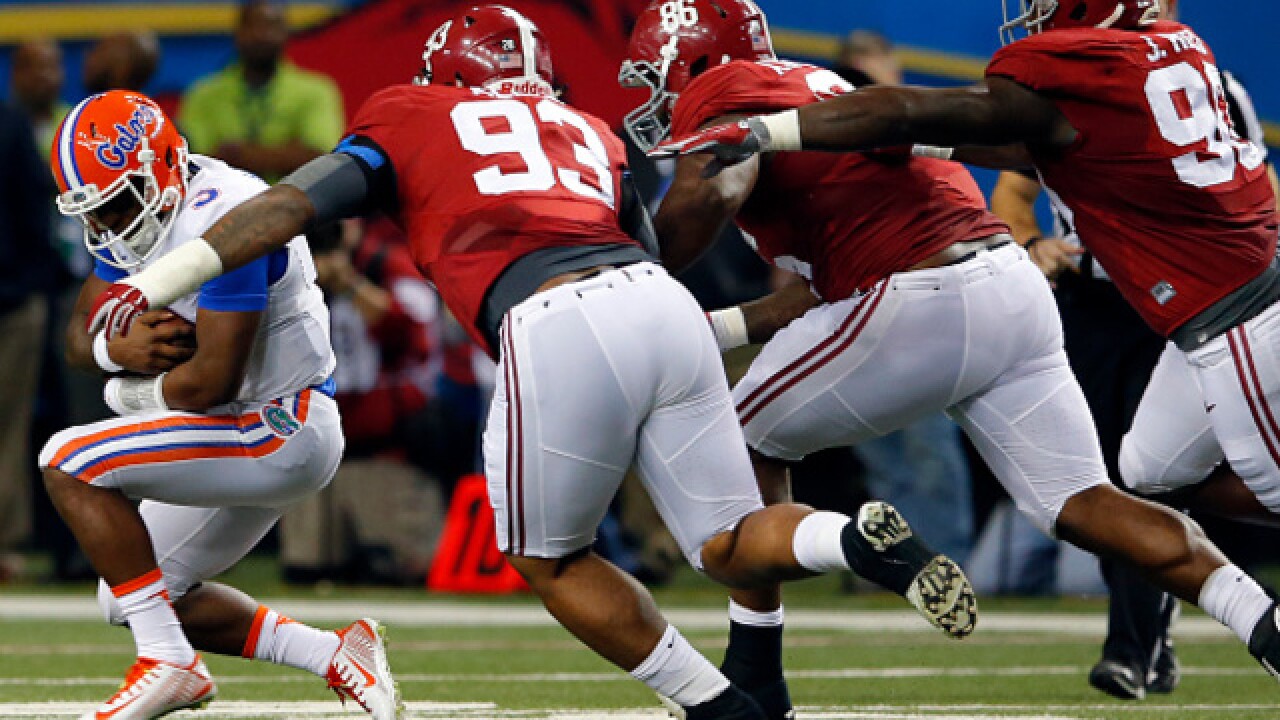 The 2016 NFL Draft is just three weeks away, and teams around the league are angling to add some significant pieces to their roster.

The Buffalo Bills have done exactly what they said they would in the offseason: they re-signed their own, and then attacked the secondary market of free agency. With an addition like linebacker Zach Brown, they've given themselves a starting option next to Preston Brown, and won't feel as much pressure to add a linebacker as perhaps they did before.

With that, what might the Bills do in the draft? A look at how the first two rounds could shake out:

- Unless a team trades up to select a quarterback ahead of the Cleveland Browns, I'll stick with Tunsil and the Titans desire to protect Marcus Mariota.

- The same story goes for the Cleveland Browns -- as long as they get their pick of the litter of the quarterbacks, I'll stick with them taking one. This time around, Jared Goff gets the nod. He won't be forced to start right away, but in case Robert Griffin III is a complete flop, he'll be there to go to if they need him.

- A bit of a different style pick here, but the Chargers could use a much better option over Manti Te'o at inside linebacker, but Jack is drafted here not for that reason alone, but because of his versatility. He can line up inside, outside, at safety, can blitz the passer, and he can cover both running backs and tight ends. An impact player in every sense of the term

- Could the Cowboys go with a defensive player here? Sure they could. However, with their talented roster, there's no telling when they'll have this type of opportunity to take a quarterback to groom for the future.

- This pick remains the same from the last mock draft to this one because the Jaguars need help in the secondary, and Ramsey can do a little bit of everything. The pick makes the most sense for both sides in a big year for Jacksonville.

- The Ravens could use some help rushing the passer, seeing as how both of their top options are 32 years old and up. Bosa is a versatile defender and is a big-time talent to add to the Ravens roster.

- Some will say that this is too high of a price for Paxton Lynch, but just seeing the way teams operate -- and how important it is to find a quarterback in the league -- he can go a lot earlier than most expect. The Colin Kaepernick drama hasn't subsided just yet, but even if it does, the 49ers are still going to need someone. With the size, arm strength, the mobility that Lynch has, and the fact that he wouldn't be going to a typical pro style offense, he could be an impact starter for Chip Kelly's system.

- With the Eagles missing out on all three quarterbacks, they go for what they hope will be an impact running back. With the way Kansas City utilized their running back last year, finding someone to take the focus of the offense from that position seems to be a necessity now with DeMarco Murray in Tennessee.

- With Buckner sliding a bit, the Saints move up a few spots to get Buckner before he gets down to the New York Giants or the Chicago Bears. The cost isn't insane for the Saints, and they add a sorely needed defensive starter to the mix.

- The Giants did take Ereck Flowers last season, but they went free agent crazy in the offseason to give themselves the flexibility to add another offensive tackle and keep Eli Manning protected. Stanley and Flowers would fight to be the starting left tackle, and then the rest would be figured out with the loser of the competition and Marshall Newhouse as to who plays right tackle.

- Enough was enough for the Indianapolis, and they move up to select Shaq Lawson to be a much-needed help to the pass rushing efforts. Lawson can play in both defensive schemes, and certainly has the athleticism to be a standup edge rusher.

- After missing out on the top three quarterbacks, the Rams hold steady and take a starting middle linebacker. They released James Laurinitis this offseason, so the need is obvious.

- Washington could use a pair of starting inside linebackers for the 3-4 defense, so in drafting Lee, they get the most versatile one that can even offer quite a bit in coverage. Lee would have been a strong consideration for the Bills had he been available at 19th overall.

- With both Darron Lee and Reggie Ragland off the board, some sort of defensive lineman could get an extended look by the Bills. Many have linked the Bills with Jarran Reed, but in a league that features base defenses less and less, I don't believe he's even the best fit from his own college defensive line. Reed is a two-down run-stuffer, which serves a purpose. However, with the potential and versatility that A'Shawn Robinson provides, he becomes someone to keep in the front of your mind as a potential Bills pick. Robinson can play five-technique defensive end in a 3-4, he can slide inside to nose tackle, he can be a defensive tackle in even-man fronts, too. Basically, with a combination of Robinson and Marcell Dareus, you can move both pieces all over the place along the defensive line. Plus, with Kyle Williams and Corbin Bryant both entering the final year of their contracts, it would be prudent for the Bills to act now on the defensive line.

- Even though the Falcons added Mohammed Sanu in the offseason, an explosive slot receiver would help their offense go to the next level. The smaller and ultra-fast Coleman could do just that for them to help take Atlanta back to the postseason.

- In need of a nose tackle, the Pittsburgh Steelers bring in the powerful Billings to start for them straight away.

- The Carolina offensive tackles were exposed in the Super Bowl, but that doesn't mean they should reach for one at 30th overall. If the right player is there -- and in the case with Taylor Decker, he is -- the Panthers should add what they hope to be an immediate starter and big upgrade on either side of the offensive line.

- Noah Spence slides out of the first round in this mock draft, but even if that does happen, I wouldn't expect him to last for an extended amount of time on Day Two. He has the potential to be a home run at this point in the draft.

- The 49ers got their quarterback in the first round, and they add a potential starting wide receiver immediately after. Chip Kelly has quite a bit of work to do to fix this San Francisco roster.

- Kaufusi is a humongous player and can probably play both as a standup rush linebacker and along the line as a defensive end when needed. He's an older prospect which is why he's selected at this point in the draft, but the potential is there for Kaufusi to be a good starter in a 3-4 defense.

- The Rams, absolutely hurting for a quarterback to compete for the starting job, takes Hackenberg and hopes that the talent he showed during his freshman season at Penn State just wasn't for show.

- A different position for the Bills with their second-round pick than I've done in any of the other mock drafts, but, the value makes the most sense here. The Bills are depending on Aaron Williams to play this season -- that much is certain. Past him, there are quite a few questions in regards to that position. Corey Graham, in his first season as a safety, struggled to adapt to the life at that position. The Bills found out early in the summer that Duke Williams wouldn't be able to help them defensively, and they walked away from Bacarri Rambo. The team did add Robert Blanton to compete for a job, but, he's only signed for one season. Keanu Neal is one of the biggest hitters in the draft, and also one of the better athletes from the safety position. His 132-inch broad jump and 38-inch vertical shows just how explosive of a player he is, and he could push to be the complementary option to Aaron Williams, or whoever the Bills deem ready enough to start. A competing inside linebacker for Zach Brown can be had in the third or fourth round.