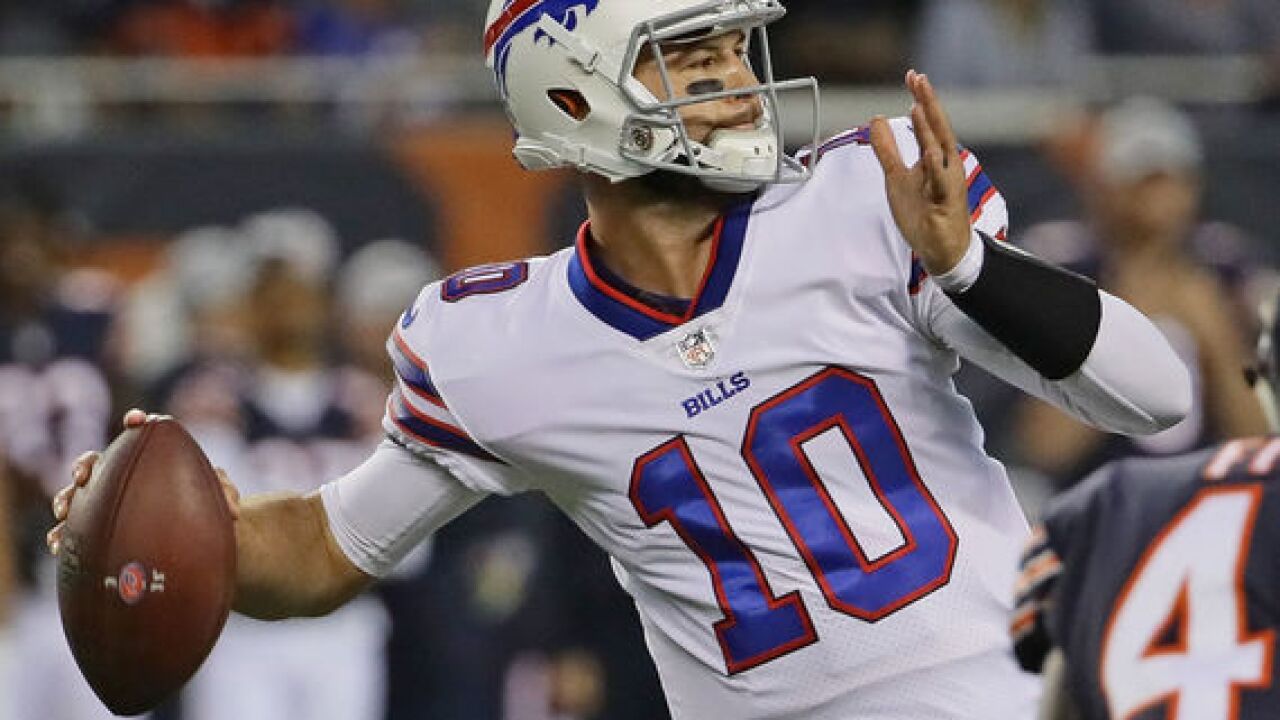 Copyright 2018 Scripps Media, Inc. All rights reserved. This material may not be published, broadcast, rewritten, or redistributed.
Jonathan Daniel
<p>CHICAGO, IL - AUGUST 30: AJ McCarron #10 of the Buffalo Bills passes against the Chicago Bears during a preseason game at Soldier Field on August 30, 2018 in Chicago, Illinois. The Bills defeated the Bears 28-27. (Photo by Jonathan Daniel/Getty Images)</p>

The AJ McCarron era in Buffalo is officially over before it ever technically started.

The Buffalo Bills have traded the veteran quarterback to the Oakland Raiders. In return, Ethe Bills will receive a 2019 fifth-round pick for McCarron's services.

Buffalo originally signed McCarron this offseason after the initial rush for quarterbacks had finished, and brought him in on a two-year deal.

With McCarron out of the picture, it means the Bills now have only two quarterbacks on the active roster: Josh Allen and Nathan Peterman, though the team hasn't announced which one of the two will start.

After the second preseason game, I mentioned the logic for the Bills to trade AJ McCarron --  a player that had been outplayed by both Nathan Peterman and Josh Allen, that the Bills basically backed into signing this offseason. And then Brandon Beane did what he loves to do, by trading away McCarron to a desperate team just before the deadline of final cuts being due.

Even with McCarron's injury it was clear that the Bills preferred Peterman and Allen to McCarron, as it was evidenced by letting the former Cincinnati Bengals quarterback play the entire fourth preseason game behind a struggling offensive line. Once they decided that, Beane likely got to work to try and take advantage of a market that showed a need for backup quarterbacks.

One of those teams that needed one were the Raiders after not seeing what they needed to in EJ Manuel throughout the summer, and made the move to bring in McCarron. And the Bills had plenty of things working in their favor with the trade.

First, McCarron has plenty of experience as a backup in Cincinnati which is likely what made him an attractive option to the Raiders. He also showed he can keep a team afloat in the event of a quarterback injury, and even win some games.

Second, the cost for McCarron is too good to pass up for the Raiders. The Bills are doing all the hard work with the 2018 salary cap because they still owe the McCarron signing bonus to the cap regardless of the trade. The Bills will owe $2.1 million to the cap in dead money in 2018, and another $2 million in 2019. All the Raiders have to pay is the $900,000 base salary. Should Oakland decide to move on next season, they'll save $3 million on their cap.

Essentially, the Bills paid $4.1 million for a fifth round draft pick. And at this point, with all their dead money to the 2018 salary cap, it really doesn't make a difference if they add another $2 million on to it. They're taking their medicine in 2018 so they can be free and clear in 2019 and beyond.

With McCarron, there was also the question about how he'd fit into the locker room as a clear number-three quarterback. His body language as the summer went along wasn't the best, and there had to be at least some concern that it could turn into a bigger problem if kept on the roster -- especially behind two incredibly inexperienced quarterbacks.

The move was the best thing for all parties, as McCarron becomes a number-two quarterback again, the Raiders get a backup for a low cost, and the Bills add a fifth-round pick while subtracting a potential problem.

The only thing that the trade doesn't answer is if the Bills are making the right call, which is something that either Peterman, Allen, or both will have to prove as the 2018 season rolls along.

However, the evidence was mounting against McCarron's inclusion on the Bills roster before the start of the 2018 regular season, which is why no one should be surprised that he's heading out west to the Raiders.