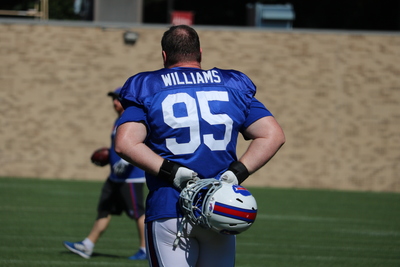 Why he’s here:
- The mainstay of the Bills roster, Kyle Williams has become a symbol of the hard work that head coach Sean McDermott hopes that his younger players take on once the 35-year-old decides to retire. Although he's at the end of his career, Williams is still a dependable player and an above average starter on a defense that needs him to play well in a critical role. Among the strong points of his game, his reaction to the snap has always been at an elite level -- even if he's not as capable of a player as he used to be. Williams has been a disruptor of plays in the backfield his entire career, which has helped him become the longest-tenured player on the roster by quite a lot. He checks in at number-9 because there isn't a lot of potential for growth due to his age, as this may very well be the last year of Williams' career.

2018 outlook:
- Heading into what could be his last season in the NFL, Williams will once again take on a crucial role for the Bills as the penetrating three-technique defensive tackle. In 2017, Williams still had a strong season, but it was clear that it wasn't near the level that fans have come to expect from him. However, he was doing it with not a lot around him which very well could have crushed his total effectiveness. The Bills addressed the defensive line in the offseason by signing both defensive tackle Star Lotulelei and defensive end Trent Murphy, along with drafting defensive tackle Harrison Phillips. All of those players are in separate roles to the one that Williams plays, so if they can occupy some blockers, we might see an uptick in his production from what we saw last year. He can't do it alone, and this year -- at least on paper -- he won't need to. Williams remains the starter and will be on the field quite a bit for the Bills.