Copyright 2018 Scripps Media, Inc. All rights reserved. This material may not be published, broadcast, rewritten, or redistributed.
Bryan M. Bennett
<p>ORCHARD PARK, NY - DECEMBER 10: Dion Dawkins #73 of the Buffalo Bills walks to the field before a game against the Indianapolis Colts on December 10, 2017 at New Era Field in Orchard Park, New York. (Photo by Bryan M. Bennett/Getty Images)</p> 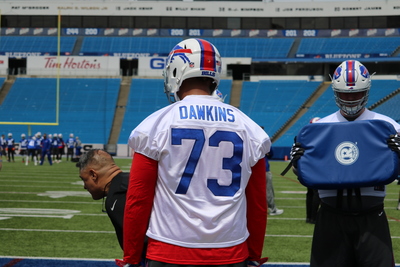 Why he’s here:
- Intent on not waiting around in the 2017 NFL Draft, the Buffalo Bills decided to trade up to secure the services of Dion Dawkins as a potential long-term starter, and all he did in his first season was to keep the Bills' belief in that intact. As Cordy Glenn struggled with injuries for the majority of the season, Dawkins went from potential right tackle replacement to a semi-permanent left tackle option. In his time on the field, he showed a steady amount of improvement to the point that the Bills felt comfortable enough with trading away Cordy Glenn to move up in the draft order -- which wound up being a critical move to secure the services of Josh Allen without giving away their second pick in the first round. In that first season, Dawkins showed strength in run blocking and also displayed solid athleticism and footwork to deal with some of the quicker pass rushers coming from the right side of the defense. Still only 24 and in his second season, there is a lot of potential for growth into a good starter in the NFL if he continues on his current track. If he develops the way the Bills think that he can, he has a chance to be much higher on this list this time next year.

2018 outlook:
- Going into the upcoming season, Dawkins is locked in as the team's starting left tackle without any competitors trying to take him out of that spot, and the Bills have entrusted him with that crucial role. They have a lot of hope for his development to keep a clean pocket for whichever quarterback starts the season, and you'd have to think eventually for first-round pick Josh Allen. Even if Dawkins plays at a similar level to what he did as a rookie, although it would be a bit of a disappointment to the Bills' front office hoping their high pick would improve, he would still be a reliable starter that shows some flashes of big ability. But, the best-case scenario for the Bills is that Dawkins develops even more in 2018 and gives them a good starting player on a rookie deal for the final three years of his rookie contract.