Copyright 2017 Scripps Media, Inc. All rights reserved. This material may not be published, broadcast, rewritten, or redistributed.
Tim Bradbury
<p>FOXBORO, MA - DECEMBER 24: Kelvin Benjamin #13 of the Buffalo Bills attempts to catch a touchdown pass as he is defended by Stephon Gilmore #24 of the New England Patriots during the second quarter of a game at Gillette Stadium on December 24, 2017 in Foxboro, Massachusetts. The touchdown was reversed after a review. (Photo by Tim Bradbury/Getty Images)</p> 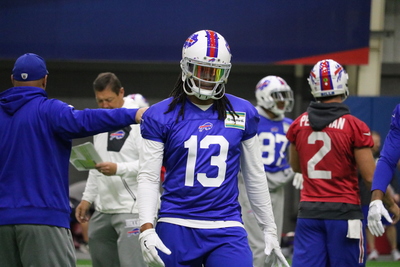 Why he’s here:
- The Bills don't have a lot of offensive firepower heading into the 2018 season, but they do have one of the more different receivers in all the NFL on their roster. Kelvin Benjamin, considering his frame and skill-set, creates a massive mismatch for most cornerbacks in the NFL in a jump-ball or possession reception situation. He has strong hands, and even though he lacks the speed to separate consistently enough, he's able to win by bringing down receptions that not many other receivers can. Benjamin is among the best jump-ball specialists in the league and could find chemistry with a quarterback like Josh Allen that gives his receivers a chance to make a play. Though 27, he still can play at a similar level for two-to-three more years at least barring injuries.

2018 outlook:
- It's a contract year for Benjamin, but he is, without doubt, the far and away top receiver on the entire roster. They will depend on him to be the prime target, as receivers go, for whichever quarterback winds up winning the starting job ahead of the 2018 regular season. Benjamin needs to prove two things along the way. He has the stay healthy, and he must show that he's a similar player to what he was earlier in his career -- because the potential is there. If all goes well, Benjamin could be setting himself up for a big contract as an unrestricted free agent -- or even with the Bills should they deem him a core building block moving forward. The Bills aren't likely to commit to him until he shows well, if he develops strong chemistry with Allen, or a fair bit of both.