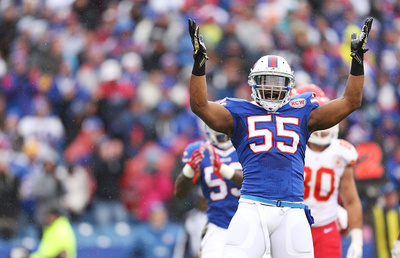 Why he’s here:
- Forget the generally accepted statistics. Without a doubt, Jerry Hughes was the most consistent performer on the Buffalo Bills roster in the 2017 season. He has significantly improved against the run over his time in Buffalo and continues to be the player that forces the issue in the backfield for the opponents of the Bills. While Hughes hasn't had the sack production that he had earlier in his years with Buffalo, he had to deal with a lot of added attention from their opponents because there wasn't a ton of talent around him. Turning 30 in August, Hughes likely will only have a short window for the remainder of his prime, but nothing that he did in 2017 makes you believe that he'll regress on a grand scale in the upcoming season. Still, because of that smaller window, that drops him down a bit on a talent countdown like this one.

2018 outlook:
- It was a priority of the Buffalo Bills to address the lack of talent along the defensive line to help the strong assets they have in both Hughes and Kyle Williams. By signing defensive tackle Star Lotulelei and defensive end Trent Murphy, now the Bills have that, and it can take a lot of pressure off of Hughes in particular. He'll see less double teams, he'll be able to work alongside a stronger player up the middle, and I think he could be in line for a bounce-back season from a statistical perspective. Hughes is working in the perfect defensive scheme for his skill-set, and his statistical production has a solid chance of getting back near what his production and talent level indicates after watching the entire season worth of film.