Copyright 2017 Scripps Media, Inc. All rights reserved. This material may not be published, broadcast, rewritten, or redistributed.
Michael Reaves
<p>CINCINNATI, OH - OCTOBER 8: Jordan Poyer #21 of the Buffalo Bills celebrates after making a defensive stop during the second quarter of the game against the Cincinnati Bengals at Paul Brown Stadium on October 8, 2017 in Cincinnati, Ohio. (Photo by Michael Reaves/Getty Images)</p> 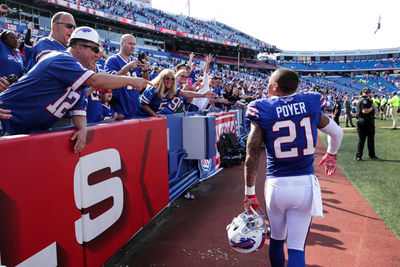 Why he’s here:
- No one, outside of perhaps the Bills themselves, could have predicted this time last year that Jordan Poyer would turn into one of the best starters on the Bills roster. When they signed Poyer in free agency, they were looking for a dependable starter — which is precisely what his contract indicates. However, not only did they get that, they saw Poyer have the best season of his career, and his success was a big reason as to why the Bills had as much team success as they did in 2017. Poyer brings a blend of speed, playmaking, and instincts that he works hard to gain an edge on his opponents. When you watch Poyer on film, you’ll see him take an educated guess a handful of times when he recognizes a play from his film study, and he’ll jump a route and perhaps even make a game-changing play. Poyer doesn’t take too many risks, but only when he believes he knows what’s coming. He has a tremendous skill-set and took to Sean McDermott’s defensive scheme as well as anyone. Still only 27, Poyer is right in the prime of his career and isn’t going anywhere, any time soon.

2018 outlook:
- Heading into the 2018 season, Poyer will join Micah Hyde as one of the better safety duos in the league. In 2017, Poyer brought in five interceptions, and as a team, all the turnovers they forced helped them to as much early success as they had. That interception total is a pretty significant number so it might be tough for Poyer to duplicate that. However, as long as he continues with his excellent reaction time and the edge he gains from studying his opponent, he should be in line for another hugely productive season. And if he does, with a cap hit of just $3.875 million this season, the Bills will have one of the best bargains going based on his playing level.