Copyright 2018 Scripps Media, Inc. All rights reserved. This material may not be published, broadcast, rewritten, or redistributed.
Michael Reaves
<p>CINCINNATI, OH - OCTOBER 8: Lorenzo Alexander #57 of the Buffalo Bills knocks down A.J. Green #18 of the Cincinnati Bengals during the third quarter at Paul Brown Stadium on October 8, 2017 in Cincinnati, Ohio. (Photo by Michael Reaves/Getty Images)</p> 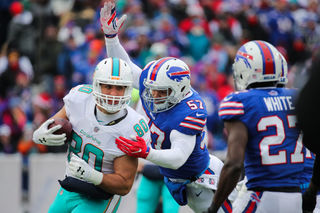 Why he’s here:
- Although he’s the oldest player on the team, Alexander’s ability level will be depended on in a couple of key areas for the Bills. He’s still quite a proficient pass rusher, and when he lined up on the left side of the defensive line near the end of the season in 2017, he actually provided a spark that was missing for much of the year from that side in putting heat on the passer. Turning 35 later this month and on the final year of his deal, that’s why he lands so far down the list. However, still a dependable starter for the team that provides something that can make an impact, he deserves a place on the list for his work on defense. He’s also a noted special teams contributor throughout his career, which is mostly what got him to Buffalo in the first place.

2018 outlook:
- For Alexander, he’ll resume his role as the starting strongside linebacker — and most importantly, they know what role best suits his game at this point in his career. It wasn’t until the second half of the season, and the rise of Matt Milano as a starter, that the Bills began to limit Alexander’s snaps on defense to help out the efficiency of their defense. Alexander would play in base sets of the 4-3 defense and come off the field in most nickel situations. At the same time, they also carved out a role for him as a situational pass rusher, all the while keeping him fresh. He’ll likely continue in a similar role this season, but now with a full understanding of the coaching staff on how to best utilize him at this stage of his career, it can help maximize his production on a defensive front seven that has much more talent than it did a season ago.