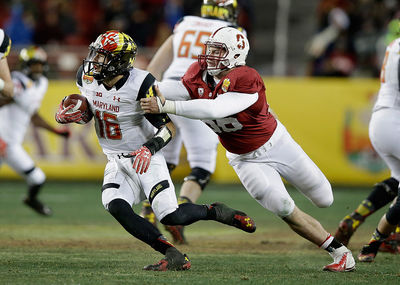 Why he’s here:
- Harrison Phillips checks in as the first rookie on the Bills Top 20 Talents countdown, and he immediately gets added to a position that this regime feels they can never draft enough to. As a defensive tackle, Phillips will get on the field as a rookie — and given his skill set, he has the potential to turn into a starter down the line. With Phillips, it’s all about his strength and his hands. He can hold the point of attack quite well — especially with his almost 34-inch arms, and it helps him occupy a blocker or two for the rest of his teammates to make some plays. He also flashes an ability to penetrate the backfield, and while it isn’t the most substantial part of his game, you’ll see him get back there every now and again. Phillips is a prototypical one-technique defensive tackle for Sean McDermott’s system — and without much pressure on him to crack the starting lineup anytime soon, Phillips has the opportunity to develop and take in all the coaching that he can.

2018 outlook
- As a one-technique defensive tackle, Phillips will be the primary backup to free agent signing Star Lotulelei — with the principal responsibility being to occupy blockers so that the rest of his defensive linemen and linebackers can get open to make plays. As for his role early on in his career, barring an injury to Lotulelei, it’s most likely that he’ll likely collect somewhere between 25-to-30-percent of snaps. McDermott believes firmly in keeping his starting players fresh with rotation along the defensive line, and Phillips will be a massive upgrade to all the different players they tried to use as a rotational one-technique throughout the 2017 season. We might even see him moonlight at the three-technique now and again to see if he can do it, but it was pretty telling that McDermott immediately said Phillips is a one-technique upon drafting him, so it would be fair to expect that role is the one he’ll have to start his career.