Jon Durr
<p>CHICAGO, IL - APRIL 28: (L-R) Shaq Lawson of Clemson holds up a jersey with NFL Commissioner Roger Goodell after being picked #19 overall by the Buffalo Bills during the first round of the 2016 NFL Draft at the Auditorium Theatre of Roosevelt University on April 28, 2016 in Chicago, Illinois. (Photo by Jon Durr/Getty Images)</p> 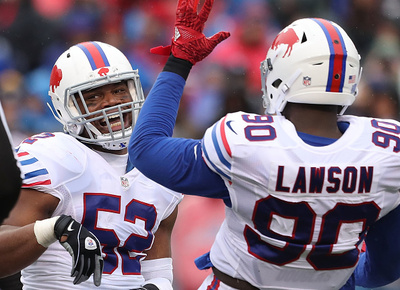 Why he’s here:
- Although his career has started with a season defined by an early injury, and then another year which was well below the expectations of a first-round pick, Shaq Lawson is still someone that has value for his physical ability that can eventually come to the surface on the field if the light goes on. Though to this point, Lawson has been a bit of a disappointment considering his draft standing. It hasn't been entirely his fault, because his first season was in a defense that didn't fit his skill-set and his second year was back in his natural defensive scheme, but he played on the left side, which was foreign to him. However, the Bills made a statement about Lawson's immediate future with their franchise by going out and spending valuable salary cap room on a pass rusher in Trent Murphy, which means Lawson likely shifts to the background. With Lawson, you certainly see flashes of a player that can be a good run defender off the edge, with the occasional ability to get after the passer -- though that part of his game is less refined at the moment. The upcoming season is crucial for the definition of his career in Buffalo.

2018 outlook
- The Bills still have Jerry Hughes as the starting defensive end on the right side, and now with Trent Murphy on the roster, there isn't room for Lawson in the starting lineup unless there is an injury. Instead, the former first-round selection will likely become a rotational piece along the defensive line -- and considering he didn't entirely look comfortable at the left defensive end spot, a switch back to his more natural right side would make the most sense. There, he would be the primary backup to Hughes and in a position that would put him in a better spot to succeed in 2018. If he shows well in the preseason, the Bills could choose to trade Lawson ahead of the regular season -- who is one of the final holdovers remaining on the roster from the Doug Whaley draft classes. If they keep him, they can evaluate him on the right side and see if he can either be someone the Bills depend on for the long-term or if they'd be better off by moving on. The importance of 2018 for Lawson's Bills career is evident for all parties.