Copyright 2018 Scripps Media, Inc. All rights reserved. This material may not be published, broadcast, rewritten, or redistributed.
Tim Bradbury
<p>FOXBORO, MA - DECEMBER 24: Stephen Hauschka #4 of the Buffalo Bills kicks the ball during the game against the New England Patriots at Gillette Stadium on December 24, 2017 in Foxboro, Massachusetts. (Photo by Tim Bradbury/Getty Images)</p> 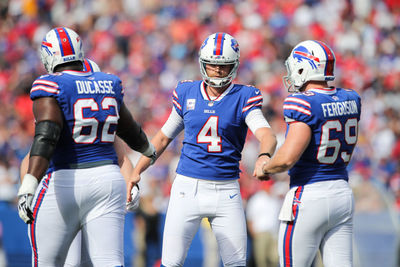 Why he’s here:
- You can’t rank a special teams player too highly on these lists because of their limited output, but Stephen Hauschka had to be placed on the list after a stellar first season with the Bills. He was as dependable as it gets during the 2017 season, consistently hitting clutch field goals from long distances. He also carries the perfect personality as a kicker. The moment never gets too big for him because he comes across as incredibly relaxed — and didn’t let his few misses in 2017 get to him. At age 33 for the upcoming season, there isn’t much concern about if he’ll start to decline in ability because the great kickers usually can go into their mid-to-late 30s.

2018 outlook
- While the Bills did sign a kicker to bring to spring workouts and maybe even training camp, Hauschka is in no danger of being released from the team — barring a complete collapse in the preseason. Even then, he’s likely to be safe based on how well he performed in 2017 — and will be given the benefit of the doubt to get it turned around. He’s as steady a player on the roster as you’ll find, which is why he deserved a spot on this countdown.