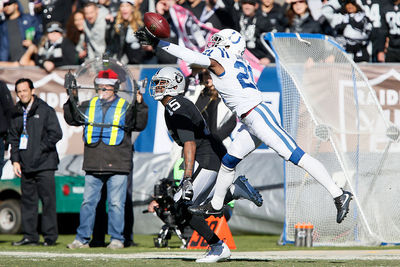 Why he’s here:
- Just turning 30 on Sunday, Vontae Davis joined the Bills this offseason primarily to be the complementary cornerback to Tre’Davious White in Sean McDermott’s zone-based defense. Last season, both from an injury and on-field perspective, was a bit of a struggle for the once-dominant Davis — but that was also within the confines of a man-to-man cover scheme. The cornerback certainly possesses instincts, and the desired ability to tackle — the latter of which is a prerequisite for McDermott. Only signed to a one-year deal, Davis is on a bit of a ‘prove it’ year in a cornerback friendly scheme — hoping that his performance can help him cash in either in re-signing in Buffalo or during free agency one last time. The talent has always been there with Davis, and now it may just come in a different form in Buffalo.

2018 outlook
- At this point in Davis’ career, a switch to a zone-based scheme could be the catalyst for renewed success in the NFL. He certainly has shown the ball skills during his eight-year career, bringing in four interceptions for half of his seasons in the league. If you match the playmaking with his instincts and plus-tackling ability, he could be a dynamic fit with the Bills -- especially with three top-notch players in the secondary along with him. The Bills showed a tendency to stick now second-year player Tre’Davious White with the opponents’ top receiver down the stretch of last season, and if that trend continues, that will lead to Davis having even a better chance at renewed success in this new defensive scheme.