Copyright 2017 Scripps Media, Inc. All rights reserved. This material may not be published, broadcast, rewritten, or redistributed.
Elsa
<p>EAST RUTHERFORD, NJ - NOVEMBER 02: Wide receiver Zay Jones #11 of the Buffalo Bills celebrates his touchdown with teammate wide receiver Andre Holmes #18 against the New York Jets during the second quarter of the game at MetLife Stadium on November 2, 2017 in East Rutherford, New Jersey. (Photo by Elsa/Getty Images)</p> 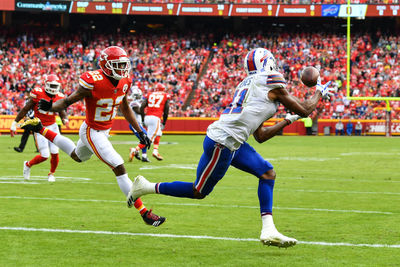 Why he’s here:
- Entering the second year of his career, former second-round pick Zay Jones has a clear opportunity in front of him to take a big step forward. Although he had his share of struggles during the 2017 season -- he also showed some flashes of what he could turn into around the middle of the season. The best game of his career to this point, by far, was during the Bills' Thursday night loss in New York to the Jets. Jones was an imposing force early on in the game, collecting a career-high for receptions in one game (6) and roping in the first touchdown catch of his career. He was consistently getting separation, and the intricacies of his route running were noticeable.  However, an injury cut that game short for Jones, and after missing the following week's game because of that injury, Jones wound up catching only 11 passes through the final seven games of the season. However, Jones is merely 23 years old, and the wide receiver position is becoming an increasingly difficult one in the NFL to transition from college football to the NFL. If he can capitalize on that route running that made him such an intriguing draft prospect, and can leave what happened in the offseason behind him, he could turn into a solid player. The talent is there, but he has to show quite a bit to prove he was worthy of that selection. A more effective passing offense would certainly help, too.

2018 outlook
- Ahead of OTAs, the Bills announced that Jones had surgery on his knee and would miss the remainder of the spring workouts, without any other timetable given. The only other bit of information that the Bills unleashed was that they don't think it will force him to miss the season, at least not "at this point."  If he can play this season, there is a tremendous opportunity ahead of him. The Bills have a wide receiver depth chart that doesn't stand out, and he has a clear path to the starting lineup whenever he gets back on the field. The second year is a crucial one in the development of young players, and the Bills will need to see legitimate signs of improvement and consistency. If they do, they've got a young wide receiver to work within their offense. If he doesn't, they might need to spend big-time offseason resources after the season is done to make sure the wide receiver position is better in 2019. As previously stated, the talent is there, but he needs to show that it can translate on the field during games during the upcoming campaign.