Copyright 2018 Scripps Media, Inc. All rights reserved. This material may not be published, broadcast, rewritten, or redistributed.
Mitchell Layton
<p>BALTIMORE, MD - OCTOBER 09: Trent Murphy #93 of the Washington Redskins sacks Joe Flacco #5 of the Baltimore Ravens in the third quarter during a football game at M&T Bank Stadium on October 9, 2016 in Baltimore, Maryland. (Photo by Mitchell Layton/Getty Images)</p> 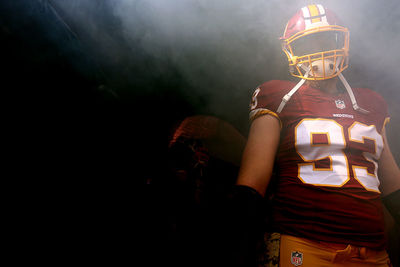 Why he’s here:
- The Buffalo Bills lacked a definitive pass rushing option to pair with Jerry Hughes during the 2017 season, which made finding one an outright necessity during the offseason. Enter Trent Murphy, who is a freak of an athlete when considering his 6-foot-6, 259-pound frame, and it seems like he hasn't quite reached his maximum potential just yet. Still only 27 years old, the Bills signed him to a long-term contract hoping to get him in the prime of his career. He certainly has potential to be closer to the top of this list considering his length, size, and speed, but with only one great season and coming off an injury that took away all last season, there is a certain amount of risk involved, too. Murphy is one of the more intriguing players on the roster because his story has yet to be written.

2018 outlook:
- The Bills took it slow with Trent Murphy in the spring and didn't let him do any drills that had any potential for contact to make sure he's all the way back from a torn ACL from last season. When they clear him for contact drills, Murphy will be inserted right into the starting lineup at the left defensive end -- replacing former first-round pick Shaq Lawson. It's not as though he'll be on the field for 100-percent of the snaps, as head coach Sean McDermott always implements a robust rotational policy even if there are injuries. If he can provide the type of pass rushing ability that he flashed during the 2016 season, it would go a long way for the Bills to become the complete defense that they lacked last year.