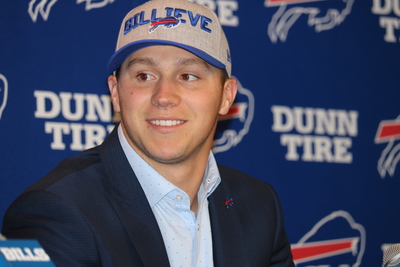 Why he’s here:
- The Bills made as bold of a statement as a team could make by moving up to select Josh Allen in the top 10 of the draft -- the earliest the franchise has ever taken a quarterback -- and now the entire organization hopes that he can become the next big thing at quarterback. The skills are obvious. Allen has an incredible arm, and he gives his receivers a chance to make a play, he's strong and shows the ability to get away from defenders in the backfield, and he's also an above average running quarterback that can get tough yardage. His potential to rise on this list is obvious, because if he hits the way that the Bills think he can, he could be right at the top for a long time to come. However, they have to be careful and develop him the way that they best see fit, because if they give him too much, too fast, they run the risk of the pick blowing up in their face. Developing a franchise-level quarterback, with Allen's type of skill-set, has not been something the Bills have had to do in quite some time.

2018 outlook:
- The Bills have to bring incredible judgment to the table to decide when it is the right time to put Allen in the starting lineup. Head coach Sean McDermott and offensive coordinator Brian Daboll have stuck to their plan to this point, but now that they're out of the safe confines of spring practices, things will only ramp up as Allen, and his ability, becomes more visible to both the media and fans during training camp and the preseason. It's easy to see that Allen has the most talent of any of the three quarterbacks on the roster. However, the Bills have to make sure that Allen is where he needs to be from the mental side, his footwork and mechanics, and implementing what they want him to during practices and the games. I believe they'll start to give him some more first-team reps about a week or so into training camp to make it more of actual competition for the starting job. However, what he does with it is entirely on him. At some point in 2018, unless the Bills have a strong push at the start of the season that carries them through to a playoff push, you'd have to believe that Allen becomes the starter at some point in the season -- if not to begin the year with strong enough play this summer.