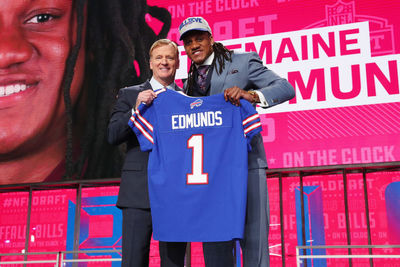 Why he’s here:
- Starved for a middle linebacker, the Buffalo Bills made another trade up the board to secure the services of Tremaine Edmunds out of Virginia Tech -- and they identified him as a potential game-changing player at a position that they value highly. Edmunds' build is not the traditionally accepted body type for linebackers in the NFL over the past two decades. Edmunds is a tall, long, and athletic player that the NFL is increasingly trying to find more and more of, and the Bills believe he can fill a pivotal role in Sean McDermott's defense. Edumunds is still incredibly young, his athleticism can make him into a multi-faceted defensive presence both against the run and in coverage, and he's going toe-to-toe with both Tre'Davious White and Josh Allen as the players with the most potential on the entire roster. The reason he is only at number 10 is that he is still a rookie and just a projection at this point, though the projections for him are quite good at this point. The Bills hope that they got a steal with the 16th overall selection in Edmunds.

2018 outlook
- While Edmunds wasn't the main draw of the 2018 NFL Draft for the Buffalo Bills, he might wind up being the most impactful first rounder for the totality of the 2018 season. From the very first moment, he was on the practice field getting 1-on-1 instructions from head coach Sean McDermott during rookie minicamp, and then when the veterans joined the offseason practices, Edmunds was firmly entrenched as the middle linebacker with the first-team defense, in the role that never leaves the field regardless of the offensive personnel that opposes them. Expect him to be on the field 100-percent of the time. Edmunds has the potential to have an immediate positive impact on the defense, and given the nature of his position, he'll likely be right in the mix for NFL Defensive Rookie of the Year honors barring an injury.