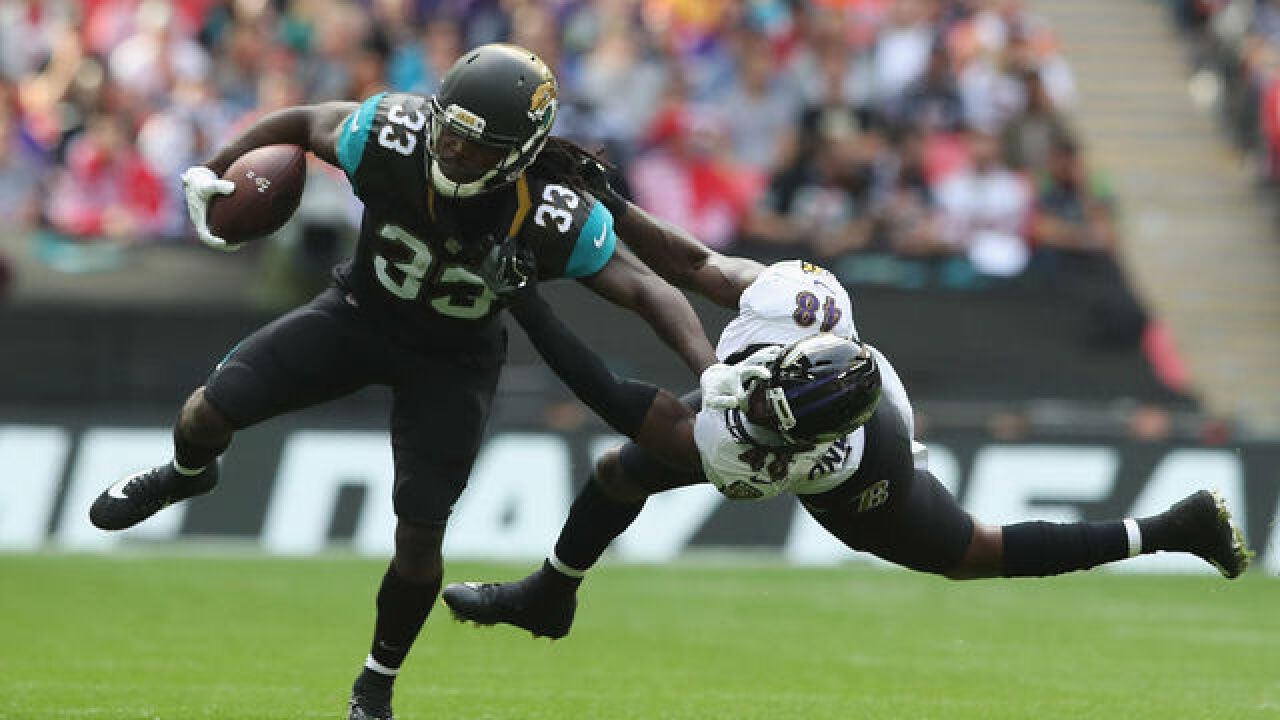 Copyright 2018 Scripps Media, Inc. All rights reserved. This material may not be published, broadcast, rewritten, or redistributed.
Matthew Lewis
<p>LONDON, ENGLAND - SEPTEMBER 24: Patrick Onwuasor of the Baltimore Ravens tackles Chris Ivory of the Jacksonville Jaguars during the NFL International Series match between Baltimore Ravens and Jacksonville Jaguars at Wembley Stadium on September 24, 2017 in London, England. (Photo by Matthew Lewis/Getty Images)</p>

The Buffalo Bills continued to check the boxes of their offseason needs, even before free agency began.

On Tuesday, the Bills announced that they've signed free agent running back Chris Ivory to a two-year deal. According to Ian Rapoport of NFL.com, the deal is worth a total of $5.5 million, with $3.5 million being guaranteed -- and could be worth a maximum value of $6 million.

The running back joins LeSean McCoy in a Bills backfield looking for an upgrade at the backup position. Ivory will turn 30 years old on March 22.

Brandon Beane has a clear as day plan for the offseason, and it's there for everyone to see. He's filling all of these holes that he would have had to otherwise fill with draft picks or in regular free agency, with veterans signed to short-term deals that won't cost them future draft picks.

Like Vontae Davis, Ivory will not count against the Bills compensatory formula for the 2019 NFL Draft.

Now, for those of you that haven't heard me shouting the importance of this strategy to Beane off of the rooftops over the past several months, here's a short refresher.

The Bills have three impending free agents that are likely to garner large enough contracts to be factored into the compensatory formula: cornerback E.J. Gaines, wide receiver Jordan Matthews, and linebacker Preston Brown. While there's still a chance that Brown could re-sign, it's looking quite likely that two, if not all three will be heading elsewhere this offseason.

And, with the future of Kyle Williams and the Bills now having some doubt cast upon it, he could factor into the compensatory formula as well if he chooses to sign elsewhere.

To avoid having the potential picks in the 2019 NFL Draft thwarted, the Bills have made two free agent signings in Davis and Ivory that, because they were released out of their contracts prematurely, do not count against the compensatory formula.

I'd expect this trend to continue as more and more players get released from their teams. If they were to sign a natural free agent -- someone that made it to the end of their contract -- they might have the flexibility to do one middle-tier free agent, with any others likely to be of the non-qualifying contract variety that won't negatively impact the compensatory formula.

As for Ivory the player, the Bills were clearly looking to pair LeSean McCoy with a running back that had a different style to give the defense different looks. You won't find much different than Ivory, who is a bulldozing, downhill runner that craves contact and will make you pay if you're not low enough.

On paper, that's a great fit -- and so is the lack of wear-and-tear, even despite the fact that he'll be entering his ninth year in the league. Ivory has eclipsed 200 carries for a season only one of his nine years -- which came during his final year with the Jets in which he rushed for 1,070 yards.

If you pair that with the fact that Ivory is getting older, and there is a natural decline for running backs the closer they get to the age of 30. Ivory is turning 30 in the next couple of weeks, and we also can't forget that LeSean McCoy will be turning 30 in July 12, even though he still looks like he's got plenty of game left.

However, with that in mind, the way this position on the roster is set up, it's begging for an infusion of youth in the 2018 NFL Draft. With the presence of both McCoy and Ivory, it makes it less of a pressing need to be drafted, but it would be quite prudent for the Bills to use one of their three Day Three selections (two fourth-round picks, one fifth-round pick) on a running back to develop as the third man behind the top two.

For now, I think McCoy and Ivory still have some game left and can be productive -- especially with Ivory as a more complementary piece at this point in his career.